For this post to have the proper effect, you really need to imagine it with the song “Wipeout” by the Surfaris.

As I mentioned in my last post, I’m on a bit of a “vacation.” A rest. Alright, more like a sudden layoff without any kind of severance pay.

Over the years, I’ve written several posts about my medical history.

The trouble with being human

So, most readers probably know I have my share of problems, particularly around breathing.

Last summer was a bad fire season with some fires very close. I developed some kind of asthma flare and in December finally broke down to talk to the doctor about it. They put me on a short course of steroids, which seemed to clear things up. Then in April, I had a bunch of things go wrong at once and developed a cough. I got some antibiotics, but May I went back to the doctor who put me on another course of steroids.

When I came back from vacation, I was a mess and (again) went to the doctor who decided that I had an exotic type of asthma and an allergic reaction to a medicine I had started in April. Going off the medication seemed to help a little, and on June 29 I went to see a pulmonologist who didn’t have an exact answers, but ordered a bunch of tests and put me on a decongestant and an antihistamine. Unfortunately, over the 4th of July weekend, something went wrong and I developed an even worse cough. But I stuck it out, hoping either the medications would work or one test or another would deliver results.

Midway through the week, I posted this to my feed on Facebook:

A little (long) update. When your best friend, boss, and childhood playmate all say the same thing — “I’m worried about you” — it can be daunting. I’ve been dealing with “an asthma flare” since the first part of April. No one knows what caused it; probably a variety of things. Allergies, maybe a small sinus infection, getting the COVID shots (not saying you shouldn’t get them, just that they can take a lot of out you.) But the tipping point seems to have been a new medication that I was either allergic to or had a rare side effect.
Since I first alerted my doctor to this, I’ve been on antibiotics, cough suppressants, and steroids (prednisone). But the situation hasn’t cleared up. They did eventually take me off the culprit medication, but are nagging me to choose another one. Going on vacation was fun, but being at a higher elevation on all those dusty roads did nothing to help, so when I came back I pulled the “emergency brake” and called the pulmonologist. Unfortunately, my former pulmonologist has moved on, so I got a new one. He seems okay though and ordered a bunch of tests. So far, we know I don’t have fungus in my lungs or a rare type of asthma triggered by white blood cells. But that’s as much as we know.
I’m on a high dose, at regular intervals, of both a new allergy medicine and a decongestant. The doctor says we’ll know in about 10 days if this is helpful or… not. In the meantime, some tests are still being processed and I’m not sure if I’m hoping they find something, or hoping they don’t. Currently, I’m unable to take Key for walks because I can’t get enough air. This results in a squirrely dog and me with a mild headache (unrelated to the dog.) The coughing has caused me to hurt my back and I am so sore and depressed it’s hard to tell exactly what hurts. I’m not really hungry and nothing sounds good, so I don’t eat right, which is creating heartburn. I keep telling myself, “spoon theory.” Do the most important things. Don’t worry about all the rest. Allow your body to rest. I’m terrible at that too. Today was the first day this week that I felt like I was getting anywhere close to enough air. Could it be that something is working?!?

Then on the evening of the 10th I was playing a computer game before going to bed. I looked down at my feet and they were ENORMOUS. I couldn’t remember the term (edema) but I knew this wasn’t the direction I wanted to go. I called the advice nurse who strongly suggested going to the emergency room then, or at least urgent care in the morning. So, the next morning, I went to urgent care. Five hours later I was back home with a diagnosis of pneumonia and congestive heart failure. I was put on antibiotics and diuretics. It wasn’t instantaneous, but by Wednesday I was once again able to walk the dog, though not for long.

The stories above should not suggest that the doctors know what’s going on. I contacted the pulmonologist who indicated he DIDN’T think it was pneumonia. He told me to keep taking the decongestant and an antihistamine. I have an appointment with my general practitioner on Wednesday (I actually haven’t seen her through this whole thing because getting an appointment with her is harder than making a specialty appointment.) I feel like the appointment won’t go well, partially because no one seems to know anything for sure.

I have not wanted to admit this, but I feel like denying it is getting ridiculous. In January, my regular doctor said my A1C had risen from pre-diabetes to diabetes level and she wanted me to go on metformin. I delayed until April; I didn’t want to have to go on more medications. But I did start the metformin in April, which was the medication that it turns out I’m allergic to. I know that at my appointment on Wednesday, she’s going to want to talk (more) about getting on some kind of diabetes medication. Unfortunately, I feel like I just don’t care about that; I just want to breath.

I know it’s all related. My weight has finally “caught up” with me. It’s putting too much pressure on my heart and lungs. The diabetes is then making those things even harder. According to tests, my kidneys are compromised from the diabetes. The whole thing is putting my body under too much stress, and my body is starting to turn off.

I am vehemently against that.

In the last week I have spent some time and energy looking over my WW app and trying to come up with a support plan. The biggest issue is that WW locations are not fully reopened, and the nearest one to me isn’t all that near. And there isn’t a convenient time. I could do the online meetings, but I am craving some human interaction for this project. And like so many other things about humans, I’m not sure how to get that.

The final challenge, of course, is that I am completely freaked out and borderline irrational. Whenever I go to the doctor’s, I swear all I hear is a big, blaring siren. It makes it difficult to have a rational conversation with the doctors who are trying so hard to help.

My boss, my best friend, and my childhood friend have all said, “I’m concerned about you”. They don’t know the whole story, but I am trying to remind myself that people do care. And that I care. And that I can make lifestyle changes that will have a long term effect, though unfortunately not a short term fix. But if I can put enough changes together, I will start seeing some improvements.

I’m trying to keep all that in mind. 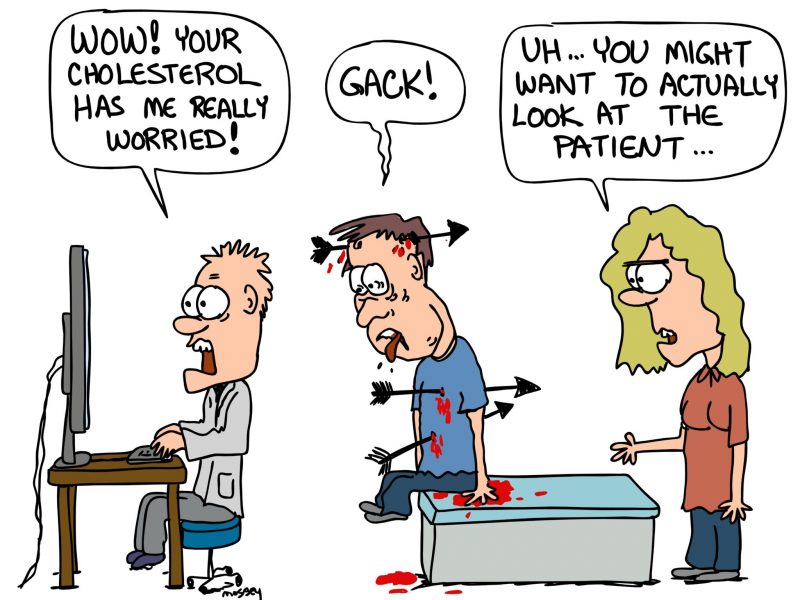 And have patience with the doctors.