A week ago, one of my co-workers–Andrew Dutterer–was killed in an accident on I-5. To say that the death was senseless is an understatement. While all deaths are hard, the sheer randomness of this one hurts almost as much as any other factor.

His obituary can be found here.

I work at a very small state agency called the Oregon Watershed Enhancement Board. With a staff of just over 30 people, I don’t think there is a single person who works there that I haven’t met outside of work at some point. In the photos below, OWEBers were having our annual float trip down the Clackamas (non-working hours). He and his wife, Caitlin, shared a little blue boat and joined in all the fun.

Andrew had an amazing smile and used it often. He loved to hike and fish and would talk about his experiences in the outdoors readily. In his early career, he worked at fly fishing shops and as a boat guide down the Deschutes River. He was an excellent fly fisherman, and has a commercially available fly of his own design available

He was a genuinely nice guy. The day before he died I heard a song by Brandi Carlile (“That Wasn’t Me“) and the line “Do I make myself a blessing to everyone I meet?” stuck with me. When I was told he died, those lyrics flashed through my mind. For Andrew, the answer was yes.

Andrew and Caitlin bought a house just down the street from my first home in the Salem area. I’d often see him walking to work as I rode my bike in. Occasionally, he and Caitlyn would walk by my house; more often, I would walk by theirs because their house was across the street from the lovely Englewood Park.

When Andrew announced they were expecting a baby, within moments people were planning a baby shower. I was so excited to have notice that I ran over to my Ravelry account and picked out what to make. It was an opportunity to do a big project.

His son, Henry, is just over three years old now. Andrew loved being a father. No matter how casually I would ask, “How’s Henry?”, Andrew’s face would light and up and he would tell me about the latest developments. Crawling, walking, talking. Pre-school would be coming soon, and Andrew was excited for that new adventure. For Henry to lose his father at such an early age seems cruel. 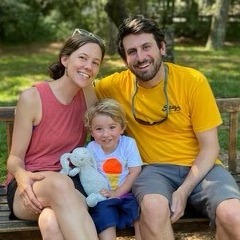 A few weeks ago, Andrew and his family used the beach house for a week. In February, my agency (and all other state agencies) participate in the Employee Food Drive. We did a silent auction, and I offered the beach house to a lucky winner, which this year was Andrew and posse. Andrew and I discussed when maximum sand would be available (I suggested a summer trip might be superior to a spring vacation in terms of sand quantity.) After they got back, I dropped by their house to pick up the keys and ended up chatting with Andrew, playing with Henry’s car collection, and discussing the merits of Harold and the Purple Crayon (I think A Greyhound, a Groundhog is a little stronger, but Henry is entitled to his own opinion.) The next weekend I went down to the beach. As I was walking around with Key, people came up and made a point of mentioning how much they had enjoyed the family. People I didn’t even know. That was the kind of person Andrew was; everything was just a little more friendly with him around.

Over the six years I knew Andrew, we did site visits, trainings, and other field trips. But mostly, our interactions were the day-in, day-out monotony of work life; for Andrew, it was never drudgery. He was genuinely excited about his projects (like this one). He enjoyed working with the grantees and bringing them together. I’m sure he did lose patience, but I never saw it. He was always cheerful and happy to help.

The only time I ever saw him truly exasperated was with me, and I deserved it. Andrew was a meticulous soul, sometimes to the point of not being able to take yes for an answer. We had been emailing each other most of the day about a project, and I agreed it was possible and just wanted to let it drop. But Andrew had more questions, and until he understood, he wasn’t going to give up. Feeling cranky, I said, “I’m going to start charging a dollar an email as a penalty.” Andrew took out a $5 bill and said, “This should cover it.” I laughed, obviously didn’t accept the money, and took a deep breath. Andrew smiled and we restarted. In the end, we got it done.

Everyone at my agency is sad about this news. Andrew regularly worked with board members and high-ups at other agencies; the office has been swamped with condolences. Everyone recognized how remarkable Andrew was.

Andrew’s wife, Caitlin, seems to have a strong support group. Siblings and parents have immediately come to town to help, and for the time being, they seem as supported as possible. With the gifts of technology, a food train has been organized and gift card donations have been arranged. OWEB is putting together stories for Henry about his father and will present the book to the family before the holidays.

This post is my initial “draft” for that letter. I have some more photos to find. And I’d like to find an inspirational message to share; but downhearted and profound are rarely located together.