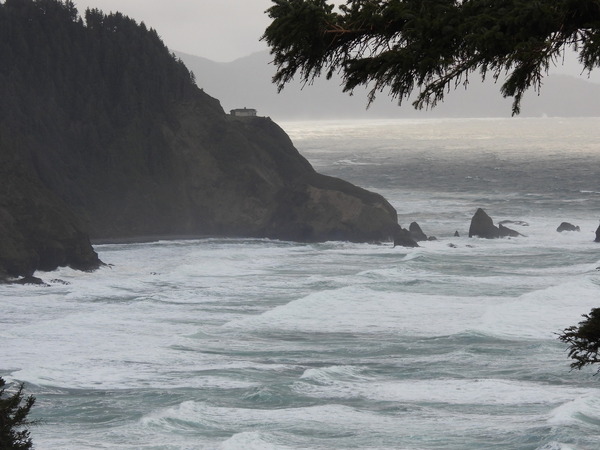 In the 52 years the beach house has been standing, and the (insert less than 52 value…) I’ve been hanging around in this location, I’ve seen snow here a handful of times. But it never fails to elicit a sense of nervous wonder. It’s not supposed to snow at sea level in Oregon. 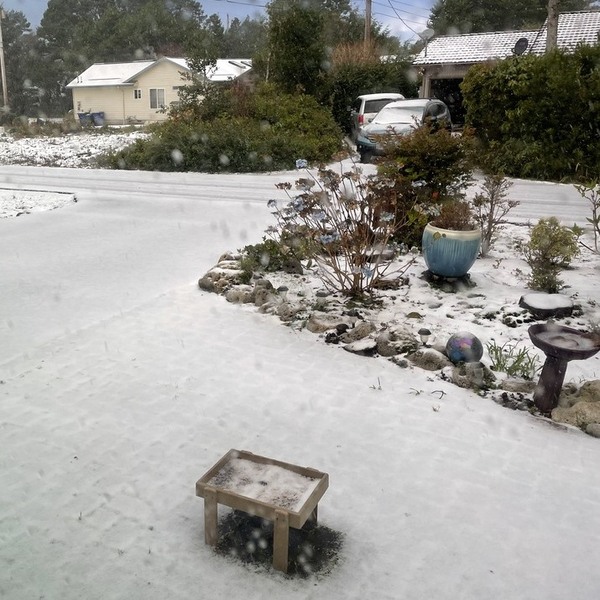 We headed to the coast last Sunday, after some doctor’s appointments on Friday and visiting a friend in Portland on Saturday. We arrived and unpacked and started up the fireplace, which was necessary! The last week has been a wet, windy, and cold experience. One thing about the coast is that you can count on new weather pretty often. This last week hasn’t been new so much as a continuing progression of worse weather.

There were a few sun (or moon) breaks, but going down to view the ocean required a serious clothing commitment because of the FIERCE wind chill factor.

So, we burrowed next the fire and let the rain, hail, sleet, snow, wind, and fog do its thing.

I took the dog out exploring on Friday. I decided to visit Cape Meares, which is about an hour north of the house. For some reason I had never visited there (or at least I didn’t remember it.) I was very interested in visiting Bayocean Peninsula Park, which I had seen on maps, but had never been able to find. This time, I found it, and about a 100 Brant, which is probably my favorite species of geese. 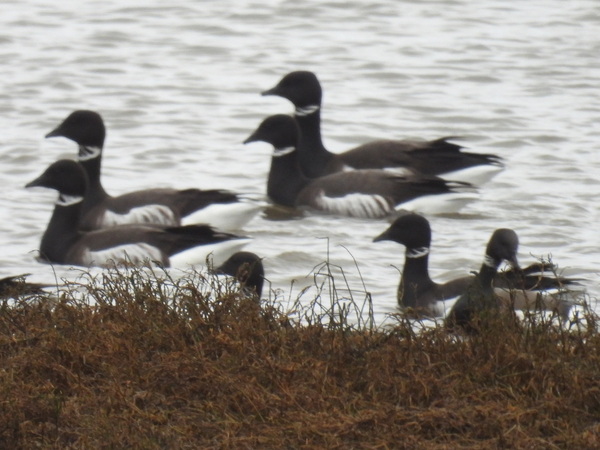 However, the weather was so cold and windy that all sensible birds had found shelter inland. Even these geese were in the lee of a spit of land. I’d like to go out again in the spring.

Next we headed for Cape Meares. I eventually found it, but by then the wind and rain was just… incredible. It’s a dramatic place and another I’ll try to visit again.

Returning home, we settled into holiday activities like seeing family, eating too much, and having a good time.

Originally, I intended to stay down here for a couple of weeks, but I decided to take the crew back to Salem today because snow and cold weather was being forecast later in the week and I wanted to be home so we’d have the best chance possible of making the nosework trial on Wednesday. But either I misunderstood the weather forecast or the weather got here a day early, because there was snow on the ground here (see first picture), six inches in the valley, and the pass between here and there required chains. So, I’m staying put. I’m hoping for enough of a weather break to get home, but this may be an occasion where common sense needs to outweigh taking the dog to a fun time.

In spite of all this staying home in front of the fire, my art output has been nonexistent. I just haven’t been in the mood. But I have been thinking about 2022 goals, so those posts will be coming out in the next week.

Happy holidays to all!