Today was the Clackamas River float and barbeque put on by the director of our agency. It’s just a fun trip she puts on based out of her home and I’ve really been looking forward to it. I was even more excited when I learned I was going to be in my very own little kayak-type boat for the ride.

After extensive preparation, we gathered for a safety talk and some pictures.

Then off we went.

We had been warned that the day could be rainy, and it started off overcast, but did move into full-blown rain as the day went on.

As they say, the worst day on the water is better than the best day at work, but there were a few minutes there when we were all a little too cold and wet for real happiness.

Unfortunately, I, in particular, struggled.

Now these are not the kind of rapids you see in the movies. They were mostly fast little places in the water. Think of the walkways at the airport: if you just stand on them they are so slow, but if you walk on them it feels SO fast. These rapids were like walking on the walkways. A little exciting, but nothing too challenging.

I’ve read a few books that have rafting in them. I’ve heard the basics: If you fall out, don’t panic. Put your feet downstream and just ride them out. We were all wearing life jackets. I didn’t feel too apprehensive.

The first three rapids went well. I would always be backwards at the end of the riffle, but I was upright and happy so all seemed well.

Then we got to the fourth little rapids. This, I was told, was “the most technical.” I listened to the instructions, but honestly I’m not sure what happened and found myself in the water. I pointed my feet downriver and prepared to ride it out. Then I hit a rock and got under the water. And the trouble began.

I couldn’t seem to get situated and started hyperventilating. I knew I was doing it, but I couldn’t seem to stop. A nice calm voice in my head was saying, “Point your feet downstream. You’re wearing a life vest. If your face gets a little wet, you won’t drown. Don’t fight. Let the water and the vest do the work.”

And a smaller but fiercer voice said,

I can’t say that I was under control, but I was just getting to a point that I wasn’t getting sucked down as consistently when a lovely, calm voice said, “Tara look at me.”

It was co-worker John. He was an experience water person in a big raft he had rented for his family for the day. 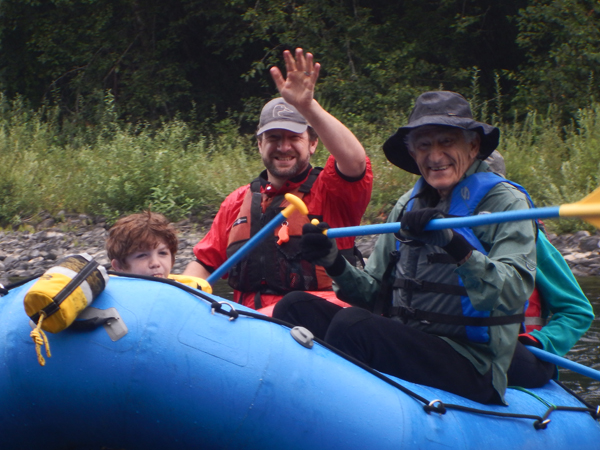 In the front of this picture you can see a little yellow bag. That’s a life line. He threw it to me, I grabbed it, and he dragged me in where I could grab onto the raft and ride it to shore.

Of course, everyone asked if I was okay and was concerned. I was still hyperventilating, but really embarrassed and feeling physically sore and a little sick to my stomach from sucking in so much of the river. Fortunately we had planned a little rest here, so the group took out and we had some snacks. However, this was at a point where it was really raining, so it was a short break.

Various groups offered to let me ride in the bigger rafts, which were generally reserved for families with younger children and I didn’t want to break that up. Also, I didn’t want to let the boat scare me, so I got back in.

Things went okay until the next rapid. This was was very shallow. This time I know what happened: my boat high sided and got turned sideways, and I went in. This time everything went according to plan and I just floated (feet first) down to calmer water. Everyone said I looked like a pro by now.

There was one last rapid before we put out, and I was determined to end the day on a high note. And I’m proud to say I made it.

It was a great group and I had a lot of fun.

We also saw a nice variety of birds: turkey vultures, bald eagles, osprey, red-tailed hawk, kestrel, blue heron, common merganser, cliff and barn swallows. The swallows were so much fun to watch skimming along the water, right next to us.

But I’m sore tonight, and not just from my dunks in the river. That paddling is hard work. And I skinned my knees several times.

I am so proud of myself for trying this. And so ashamed and embarrassed about all my tumbles and rescues. I know, intellectually, that someone always falls out. But I wish it hadn’t been me.

Will I go next year? I don’t know. I hope to have lost some more weight. Maybe I’ll rent (or own) something a little more stable for myself, or even take lessons. We’ll just have to see.