The random day that helps you with perspective

Warning, right up front. This post is about weight loss, medical stuff, and emotions. Stop reading now if you’re in it for the humor or the art.

I had two doctor’s appointments today. I also had to go to work early to work around one of those appointments. A stapler in my office caused me to have a meltdown. My dog was attacked by a cat as we were out taking a walk (multiple times because the cat just kept attacking until I picked Key up.) Tonight I have to wear a strange medical device to test how I sleep.

Why did that help with perspective?

So with that day behind me, I opened the dog food container to feed the beasts. They had EXACTLY one more serving left. Normally, I go to the pet food store on Weight Watchers night, which has moved from Monday to Wednesday and then to Tuesday. So, I had a choice. I could let them go hungry in the morning (not really an option), I could go and get food for them and take my chances going to Weight Watchers tomorrow (knowing that the last two weeks I haven’t stayed for the meeting), or I could change my plans and go get food and attend a meeting.

Something about having the day I had made me realize just how close to giving up living a better lifestyle I am. I knew I was close. I’m tired, nothing fits, I feel awful, and did I mention I was tired? Sunday I went to the grocery store for the first time in a couple of weeks; I bought the right stuff, but I hadn’t prepped it.

I am not breathing well. In the last six weeks there have been tests for my heart, lungs, blood, liver, head, digestion, and I’m sure if there was some other part of me that would have been tested too. My main complaint is that I can’t draw a deep breath. Every breath feels like my lungs are a balloon that wants to expand but that is trapped inside a too-small glass jar. In addition, I’m having bad heartburn and occasional heart palpitations. The doctors are taking things seriously, but it’s a process. A long, frustrating process.

Every time I go to the doctor, I come back upset and frustrated. I’m frighted that I’m going to have to give up another pet. I’m also frightened that they are going to tell me it’s all because I’m fat. I’ll own that last one, and I’m 100% sure that if I lost weight everything would be easier. But I still believe something isn’t right. The whole thing ends up being a Catch 22; I go to the doctor hoping to feel better, I end up feeling worse, so I eat which exacerbates the whole thing.

So, I went. And had a good meeting (for once, I’m not liking the leader, but tonight she was okay).

And when I came home I decided to be good to myself and prep my food. 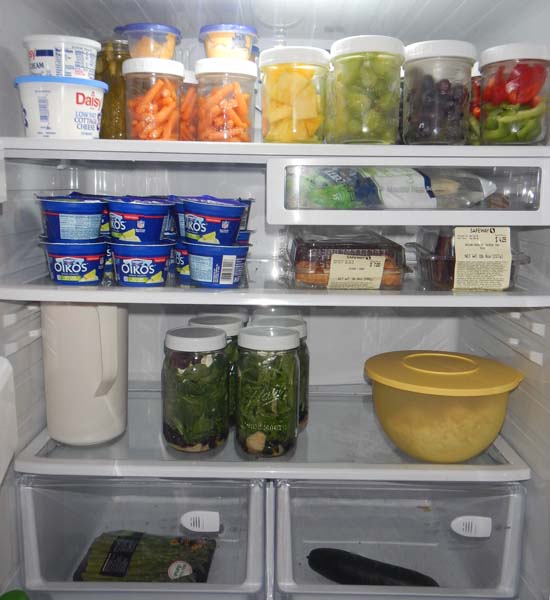 I’m not gonna lie. I’m not sure how committed I am. But it’s been two years. I’ve lost 95 pounds; I’ve regained 75 pounds. But I have nothing to gain by throwing in the towel. I might as well keep trying.

2 thoughts on “The random day that helps you with perspective”