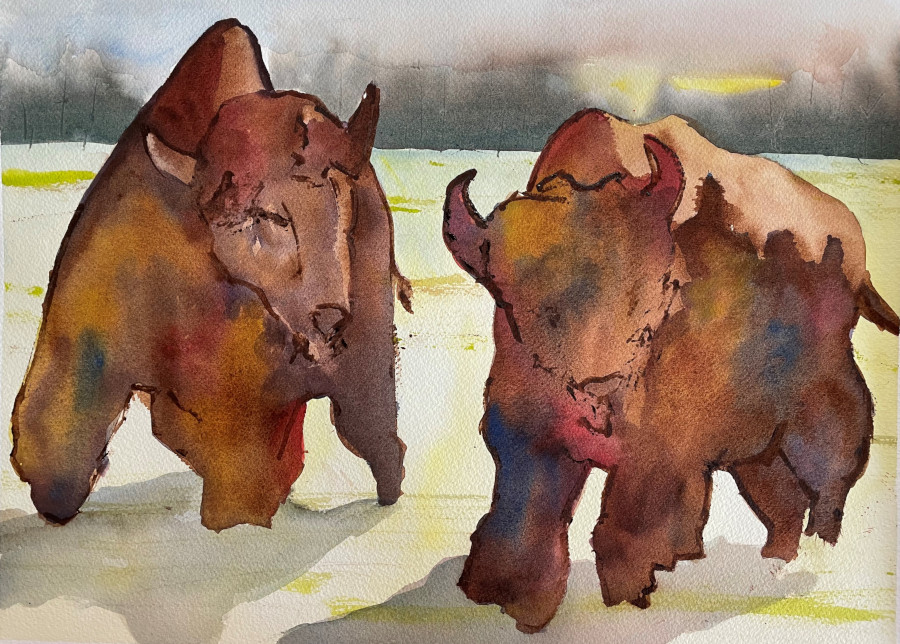 For those of you who were worried about my sanity because of the recent influx of dancing animals, you will be relieved to know that this post does not showcase any NEW dancing animals projects.

Yellowstone Dancers – the pause before commitment

I am still working through my ideas around Yellowstone Dancers. I think I’ve landed on a plan, but there are a few details that I’m working through. Here’s a recap of the six directions I am toying with.

I’d love to hear what you guys think the most effective study is.

As I’m not ready to struggle with the full sheet that Yellowstone Dancers will become, I started two new paintings while contemplating my options.

There are things I am liking about each, though they have a long way to go. The reference photos are from this summer’s trip when I stopped at Sand Wash Basin to see the mustangs.

The following is a personal  recap. If you like the art stuff, stop here. There are no pictures or fun things below.

In other news, I am headed back to the doctor. I don’t want to, but things are not heading in the right direction. I’m on a total of 18 medications (including vitamins, etc.) and I’m still struggling with this list of issues:

This seems like too big of a list to keep ignoring. Saturday I felt awful; I slept 8 hours the night before, took 2 naps during the day, took the dog for 1 walk, sat around on the couch the rest of the time, and then slept 9 hours the next night. Sunday (today) I do feel better, but it’s a relatively low bar.

I feel so bad that a lot of the time, I don’t want to eat. You would think that would help my blood sugar or help me loose weight, but it doesn’t seem to. And when I do eat, things don’t seem to sit well. A friend posted about a condition called mast cell activation syndrome (MCAS) and so many of the symptoms fit that I sort of wonder. I am pretty sure that’s not the cause, but the point is, something isn’t right and I need to stop using “ignoring it” as the treatment option.

I don’t usually write about my job; it’s sort of boring and I wouldn’t want to hurt anyone’s feelings with a poorly-thought-out comment, but this has been one of those weeks that I need to recap, just so I can look back on it and hopefully be in a better place.

In late August, the Executive Director of my agency announced she was moving on to a new position. While this was professionally irksome, I think everyone was excited to personally wish her well. Then came the second announcement. The gal who was our deputy director, and who would have been the logical person to take the ED’s place, had decided to “step back”. In other words, she wanted to go from being a cheese to a cracker. Fair enough, but it meant that a whole new person would be heading our executive team and we’d be dealing with at least two new managers (of a total of 4.) It seemed like a lot.

Then my co-worker died, which hit everyone hard. The memorial was last weekend, and while it was a lovely service, I think it was harder than any of us gave it credit for.

The cherry on our personal sundae was announced a few weeks ago; my agency had finally gotten permission from the head office to move into a smaller footprint, meaning we would give up individual cubicles in favor of extended work-at-home allowances and in-office stations that you check out for the day. That move would be happening in early November. We’d been making some changes to prepare, but with a deadline in hand, my team would have to put it in high gear.

By the time I went into the office on Thursday to help with the move, I had cried each of the preceding days of the week. This week had quite a few items on it, and they were the kind of items you don’t do very often, but are really important and time-consuming. With the changes listed above, many of the people I work with on these projects were either gone, new, or overwhelmed. It wasn’t a good scene. Then Thursday I went into the office to help with the move, had an epic low-blood-sugar meltdown, and was unable to help for the entire day. It made the score 0-4 for crying.

I went down to the beach this weekend, and did very little, partially because I did feel so poorly. Intellectually, I know that we have to give ourselves space. But things do seem pretty overwhelming right now.

Continuing along the theme of “ignoring it” is not the best option, my therapist retired last month and I have yet to find a new one. She made several recommendations, but I hate doctor shopping and haven’t dealt with the issue (what’s new). But with all the above, I may need to hurry up and find someone who can provide some guidance. You know… just to make sure the painted animals are the only ones dancing in my world.

2 thoughts on “No (new) dancing animals”