A smorgasbord of art

A few of you may have noticed that I didn’t post last week. My intentions were good, and it certainly wasn’t from any lack of inspiration. Time was the limiting factor. Today, I still have a lot to do, so this post will have a random flavor that’s necessary to recap that last two weeks.

After work, I tuned into the monthly demo/lecture from Ruth Armitage as part of the Roaring 20’s mentorship workshop. April’s featured element is color, and she took us through some exciting artists I had never seen before, including Israeli artist Yael Maimon. Later, while admiring some of her work, I stumbled across another pastel artist, Merle Bishop. I really fell in love with his titles and symbolism.

It was my Friday off, so I spent a little time viewing an online demo from talent local pastel artist Marla Bagetta. I also spent time working on the Spring Convention for the Watercolor Society of Oregon. We had a digital convention, and I was working to get all the video tutorials up and referenced as well as the various notifications that were necessary to everyone could view what they were supposed to view.

I had signed up for four breakout sessions through WSO, and I spent the majority of this day working through some of those videos and answering help emails and phone calls from other WSO-ers who were trying to view the videos.

What videos did I watch?

All the videos were excellent, especially considering they were created by amateurs using the various tools at their disposal. I have yet to view the video with Rene (next on my list), and the first two were lectures rather than paint-alongs. But I whipped out my own reference photos of Tumalo Falls to work on during Harold’s session.

That evening the awards were announced, which was another thing I worked on. The powers that be wanted the video and posts scheduled to go up at the right time. My painting wasn’t among the award winners, but it looks like a great show anyway! I’m going to try to go up next weekend to see it in person!

In addition to the technical challenges of website and YouTube I agreed to help with for the convention, I was invited to moderate the Sunday juror demos as well as the Monday-Tuesday workshop.

While moderating, I didn’t have a lot of opportunity to follow along the whole way, but I did have an opportunity to make some quick sketches with their techniques.

Our jurors were Stephanie and Ken Goldman, and Monday was Stephanie’s day. As you can see, while each artist has their own style, both work a great deal with the human figure. Stephanie emphasized the power of studies, toned paper, and the power of value.

Again, with all the various issues, I only had a few moments to follow along. I used an old photo of my grandmother with her sisters, a piece of scratch paper, and a sharpie and white gel pen to do the sketches below. 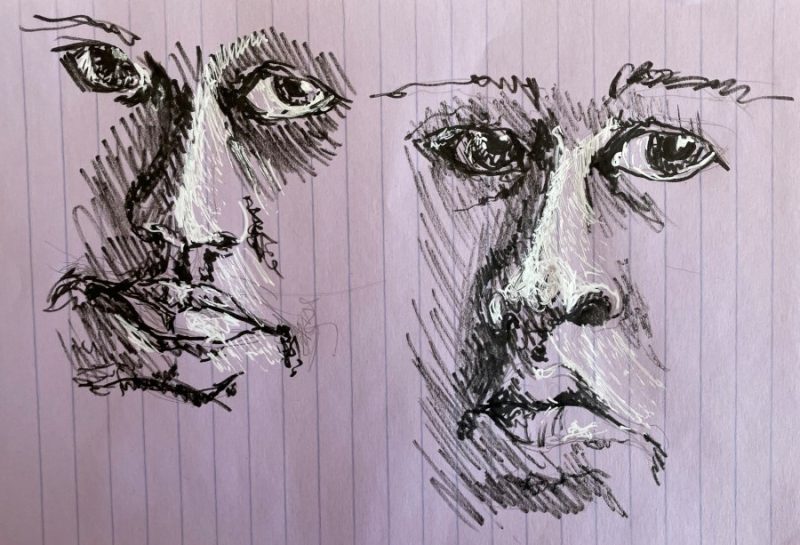 The next day we switched to Ken. He focused on the face as a whole and loose, fast figure studies. Everyone was getting tired, so I had some time to follow along while he was doing the portrait. I didn’t care for his reference photo, so I again chose a reference photo from my recently scanned archival collection.

I have rarely done humans, and I wasn’t expecting great things. I was pleasantly surprise that the result turned out even this well. 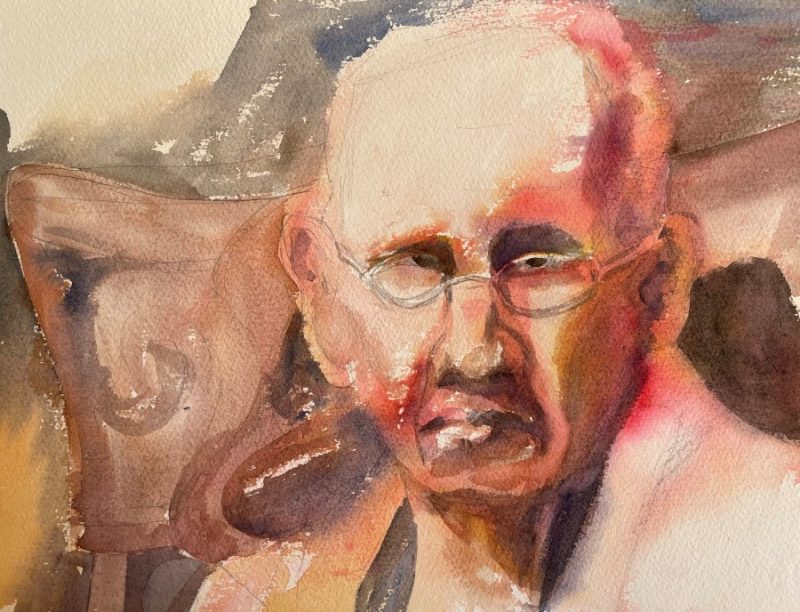 After the workshop, I asked Ken about it the painting and about how to paint non-model humans (i.e. humans with big ears, no hair, or large noses… just to pick an example.) Here is his critique:

My answer would be that you do it just like you did color-wise because I like your colors very much. But as regards the other part of your question, you did make mistakes (the viewer would be correct in this case.) The mouth looks good. The chin should have been longer, the space between the nose-base and top of lip longer, the nose and forehead shorter, and the ears set lower with the small ear made a little bigger. Then the charm would come through without reservation, especially if painted as nicely as you did on this version. Try again.

In order to see the things I mentioned good enough to draw them correctly, you should really enlarge the head so it will be easier to see and understand the subtleties of placement.

Remember how I started in the center on my portrait demo and made a lot of construction lines while moving outward? You could do the same by starting with the shape of the glasses, the eye shapes inside of them and the bottom of the glasses nearly sitting on the wings of the nose. That is how you can be sure the nose does not get too long. From there, move up for the shapes of brows and forehead and also move down for the shape of upper lip and chin. Do the outside of the head and ears last after the features are placed correctly. Hope this helps.

I wasn’t interested incompletely starting over, but I did make some of his adjustments, just for fun, as well as adding some more color. 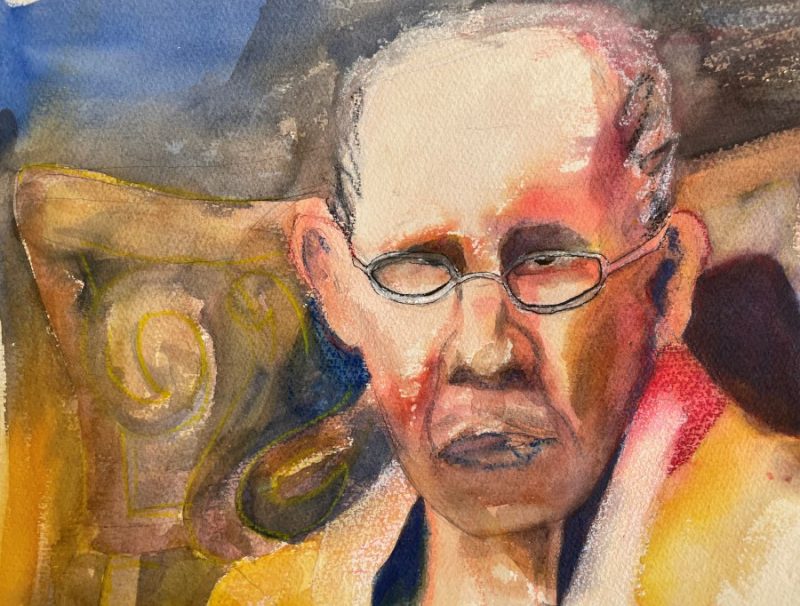 All-in-all, this was a great exercise, though I don’t see human portraits as being a huge part of my repertoire.

What did stick with me of the course of both workshops is the power of observation as well as the importance of confidence. I can see myself using a few of the ideas on other projects.

After the workshop, I worked half the day on Monday, but Tuesday I had a doctor’s appointment, so that day was a waste. Then Wednesday through Friday I had to do my regular job. After work I would “rush home” (log off one computer, log onto another) and finished editing and posting the records of the Sunday demo as well as the Monday and Tuesday workshops. By Thursday, I was feeling tired of all things art, generally, and WSO, in particular.

I took the day “off” and did a run out to Basket Slough, then over to a nursery to pick up the final plants I needed for the revamp of my front garden. I spent some time planting my purchases, then headed indoors. We’ve been hit with unseasonably warm temperatures, to the point where I turned on the air conditioning so I could get to sleep.

By the end of the day I was feeling relaxed enough to do a few final touches on the paintings of the week before (you’ve seen the “final” versions above) and then start a new puzzle. The puzzle is “The Kiss” by Gustav Klimt, and while this is not one of my favorite works, I picked out the puzzle to spend some time getting to know his color theory. I’m already blown away by how much color is actually in the painting.

Which brings us to today. In a few minutes I’m going to view the Western Federation of Watercolor Societies Exhibition with a friend, and then, my friends, I’m going to relax.

One thought on “A smorgasbord of art”