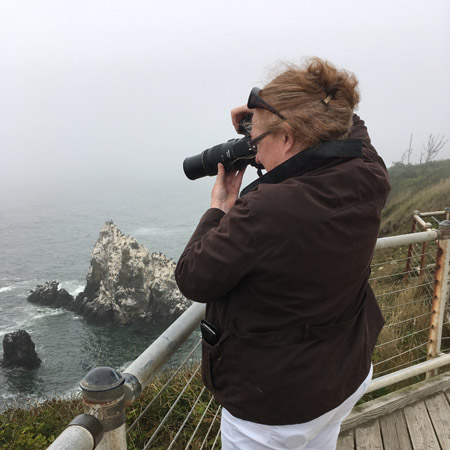 For the last week I have been a blissful combination of artist and tour guide as I gathered Ruth Buchanan up at the airport and showed off Oregon (in between making her teach a class at the fabulous Oregon Society of Artists (OSA) in Portland.) More about the class tomorrow.

I collected Ruth much more smoothly than last year (inside joke there) and took her to downtown Portland to see OSA and then swing by Blicks for workshop supplies, before taking her to a restaurant I have wanted to try for a long time, Portland City Grill.

Portland City Grill is on the 30th floor of the US Bancorp building. The food was good (pricey, not terribly generous, but good), but the views are what people come for.

Even though the fire smoke obscured the best views, you can see what it was like!

Since reading “Timberline Lodge: The History, Art, and Craft of an American Icon” I have been wanting to go up Mt. Hood to see Timberline, a place I have visited many times as a child, but never as an artist.

I think Ruth liked Timberline, but she had told me from the beginning she wanted to see Multnomah Falls.

Her wish is my command.

To pay for all my tour guide services, I forced Ruth to teach a workshop on drawing from Saturday to Monday.

It was AWESOME (I swear, more tomorrow). But after, we were off again.

Tuesday was not a day that we moved quickly. I started out with an elaborate plan about going up to Astoria and then driving down to Lincoln City (where we had a place to stay), but common sense prevailed. Instead, we took it slow, got off late, and sort of eased our way west.

We hit Basket Slough where I tried to pique her interest in birding.

As punishment, I am assigned to paint this. 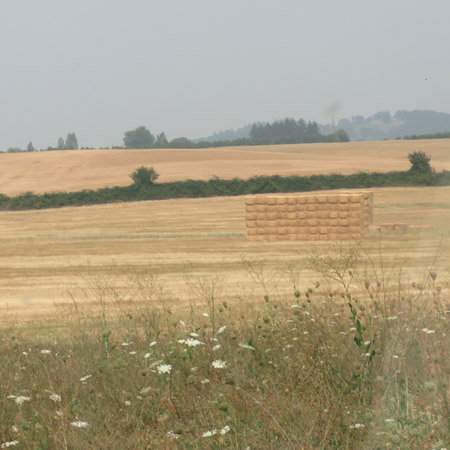 When we hit Lincoln City, though, Ruth started to get into the groove. 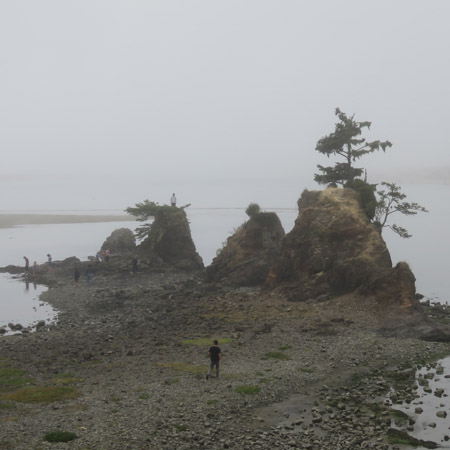 We stopped at one of my favorite places, Alder House Glass, and watched a vase being made.

Then we headed to Yaquina Head Lighthouse and Outstanding Natural Area via Cape Foulweather and Devil’s Punchbowl.

We capped off the day with dinner at Tidal Waves before soaking in the best hot tub in town at Hotel Maggie.

Wednesday – No to the whales, but yes to elk

My plan was to take Ruth out to see the whales via Whale Research Eco Excursions, but the picturesque marine layer just turned into dense fog overnight and the boats didn’t go out. We stopped a little in Depoe Bay because Ruth’s partner is a film camera operator and I had shown her the nearby Oregon State Hospital which is featured in the film One Flew Over a Cuckoo’s Nest. Anyone who has seen the movie will know that Depoe Bay is also featured.

From there we travel south through the fog, our goal Cape Perpetua. We stopped at Earthworks Gallery in Yachats to admire the work of Bev Jozwiak, Harold Walkup, and Sarah Bowsama.

Because of the fog, Cape Perpetua was atmospheric but not necessarily farsighted.

Still, the wildlife ended up making up for it. As if to make up for the lack of views, I was able to show off a bald eagle, a pair of barred owl youngsters, and a fairly large herd of cow elk.

We returned to Salem to pack up, make the final arrangements, and do the rest. Ruth boarded the plane this morning to head back to England (via Reno). But we’ve already started to plot what we’re going to do the next time she comes back.

1 thought on “Showing off my state”