During what the press is calling “Women’s Weekend” I attended the Salem WomXn’s March to mark the anniversary of the epic 2017 Women’s March. Note: I am not going into what I think about the name change.

The signage standard , already  high last year, was even higher this year. While I opted for my low impact, simple sign (I will not consent to hate) and wore my pussy hat again, many others took it big and stayed out!

I did a very bad job of capturing signs this year, though.

The march took place in MISERABLE weather, but was surprisingly well attended in the end.

But my favorite items of the day were knitting related. 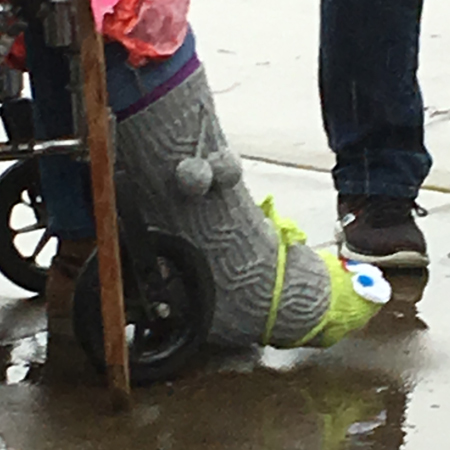 I thought this was just a cool sock to decorate the cast (cast swag, if you will)… but it’s really just a foot warmer.

This little unicorn also caught my attention. I  may need once of these hats for myself…

I started out with the fun stuff up front because I didn’t want to scare anyone. If you have gotten this far, be warned; I’m going serious.

Last year I wrote several posts about the “current” situation, and I’m pretty proud of them.  But the one about having an action plan was one that I thought could use a revisit. So here’s my 2018 Action Plan: