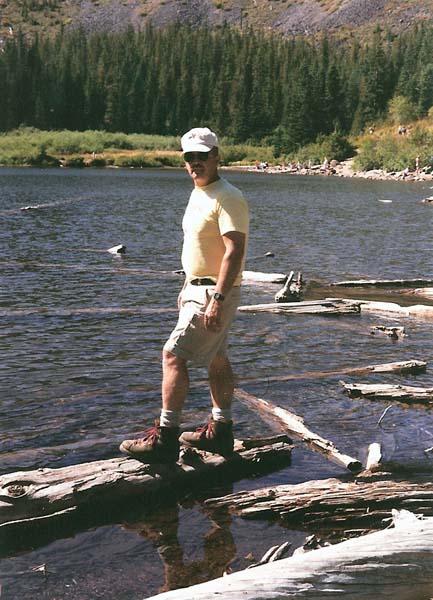 Today Mom and I moved Dad into a memory care facility. 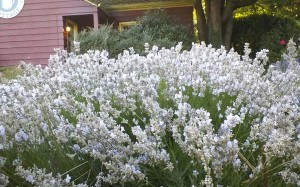 I took the day off work and drove down to Lincoln City first thing to help Mom. I figured if nothing else, I could be a pack mule. On the drive I stopped at a little coffee shop; it had the most beautiful white lavendar in front of it. I need to find some of this!

Upon arrival, my first job was taking Dad to NESS to hang out for the day while Mom and I got his room in order. When I got back, Mom’s friend had taken the load of heavy stuff, so we loaded up the last of the lighter stuff and headed out.

When we got to Dad’s new residence, the day unfolded as I expected. One person after another came to Mom to ask questions about Dad’s care, abilities, and routine; I played pack mule and general dog’s body.

While I was tired when it was finally time to go get Dad, the emotional part of the day was really just beginning.

Just so you know, this is how I see my dad. This is Dad.

In the last few years I’ve seen my dad in several hospitals, struggling to walk, and sleeping a lot. That’s not Dad.

While we were setting up his room, in a complex surrounded by other residents, it was disheartening to recognize my “new dad” in a lot of those behaviors: the trembling hands, the slurred speech, the hallucinations, People who haven’t dealt with dementia/Alzheimer’s think of this disease as memory lost. That’s really not what it’s about.

I will never see my dad again; he helped me roof my first house, catch fish, and learn to garden. Instead I will watch “new dad” sink further into immobility, confusion, and dependence.

While this is hard on me–and Dad–I know it’s even harder on Mom. She has done her level best to keep him at home and has given up so much of her life to keep him at home. But it’s like a scale; there comes a point when you can no longer give enough of yourself to keep the scales even. I know of at least two 911 calls because Dad had fallen and she couldn’t get him up. I don’t know how many tons of laundry she’s done in recent years for him. I don’t know how many times she’s explained that the cats and dogs and rabbits he sees around the house aren’t really there. I don’t know how many things she’s purchased to try to make his life a little better. “I said for better or worse,” she says.

When Mom finally went to pick up Dad from NESS and bring him to his new home, I watch him walk into the complex. It has a security code that he won’t ever figure out, even though it’s printed right underneath the keypad. The windows only go up about three inches for security. It’s a little like prison (though a nice, clean, and friendly one.)

I asked Dad how he was doing, and he responded, “Tara, to tell you truly, I’m confused.” And he went into his room and sat down and basically refused to answer more questions or accept our help.

The next few weeks are going to be tough and I hope everyone survives.

Before we left, we walked Dad out to get him set up for dinner. He told mom he didn’t like it and wasn’t going to get used to it, and an expression crossed his face that was just heartbreaking.

If only I had a magic wand.