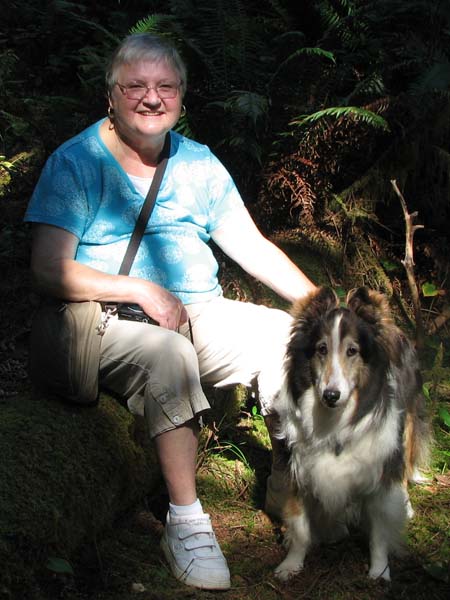 Dad has been in the memory care facility for about a month now, so I marked my calendar for a quick day trip down to Lincoln City to meet up with Mom and have a little visit with Dad.

Mom and I originally chose today because the Audubon Society of Lincoln City was having a fiend trip, but the excursion was up in Tillamook, we decided to do a little exploring closer to home and took a trail down the road from Dad’s facility.

While we didn’t see many birds (a few chickadees, a pair of brown creepers, lots of Stellar Jays, a couple of unidentified wrens, and a squirrel) it was a lovely and relaxing walk. I took Finn down for the day so he could visit Dad and enjoy the hike.

Mom and I had fun with our cameras and took some pictures of each other as well as Finn. We went out to lunch and also did a quick trip down to the beach at Land’s End, but it was too windy for more than a quick jaunt in the sand.

I saw Dad when I first arrived, after our hike, and after lunch. I am delighted to say that I don’t think his physical condition has changed too much; in fact he has lost some weight (16lbs according to Mom) which is a good thing.

His physical condition–in the traditional sense–is really not the problem.

When Dad was living at home, he had a routine. He got up, ate, sat in his chair, ate, took a nap, ate, and went to bed. His world was small and predicable and he had a lot of time to adapt to this environment; as he got less cognitively able to understand things, he had muscle memory to guide him. Additionally, Mom could actively supervise things like dressing and bathroom habits.

In his new home, which is classified as a memory care wing of an assisted living facility, everything is new and he has a lot less supervision. This has resulted in (almost) a never-ending string of falls. Since arriving, the longest period of time he has gone without falling is three days. Mom has purchased a new (non swivelling) chair for him. He had changed from a cane to a walk and they are strongly urging Mom to get him a wheelchair (though the doctor does not want to do this yet as he feels this would remove all incentive for activity.)

At his formal one-month review, the staff hinted to Mom that he was beyond the scope of their abilities. He is big enough that they have had to call the paramedics several times to help him get up and they are not staffed to deal with the kind of supervision he seems to need. For example, today after lunch we came back and Dad had decided to undress and get ready for a shower. Except he wasn’t scheduled to have a shower, so essentially he was unclothed for no reason. When Mom inquired to the orderlies about the situation, they were completely unconcerned and unresponsive, leaving Mom to get him redressed. After that, he wanted to sit in his chair, but he was unable to understand how to get across the room and turn to sit down. Mom and I helped him (and by helped I mean we physically lifted him, because he doesn’t have the muscle strength) in and out of his chair four times before he was satisfied with his positioning.

Friday Mom and Dad went to see the doctor, who ordered physical therapy in hopes this would help with some of the falls and improve other task-based skills. The doctor also told Mom that he thought it was time to take Dad off some of his medications; for example, Dad probably won’t live long enough for the cholesterol medication to effect his life in any real way. Also, they have decided to take Dad off warfarin because if he continues to fall, the increase possibility for bleeding could be an issue.

As I left, I told Mom that I didn’t think Dad looked physically worse, but that I could see that he needed more care than he was receiving there. Mom admitted she was researching nursing homes (a higher level of care.) There are not any that she is comfortable with near her at the beach, so Dad may be moving back to my area with Mom living with me at least part time for the foreseeable future. I’m fine with that, though it’s clearly one more stressor for Mom, who is looking and feeling a little worn.

When I arrived home, I crashed for a nap, worn out from the day. I can’t imagine how Mom is feeling.

A few hours later Mom called and told me that the facility had called and that Dad had taken a fall and this time said he hit his head; he went to the hospital where he had a CT scan, but it appears that nothing is wrong with him (other than the normal) so hopefully he will be back “at home” before the evening is out. The facility called Mom to see what she wanted them to do, partially because they are required to call her and partially because they couldn’t find anyone else to tell them what to do (being the weekend, they couldn’t get in contact with any supervisors.) Mom admitted that she find this confusing; she is 30 minutes away and can’t lift him… what are they expecting her to do?

At the end of the conversation, she told me that she thought his move might be happening sooner rather than later.

2 thoughts on “The Fact Check Mission”