Sorting is any process of arranging items systematically, and has two common, yet distinct meanings: ordering: arranging items in a sequence ordered by some criterion; categorizing: grouping items with similar properties. 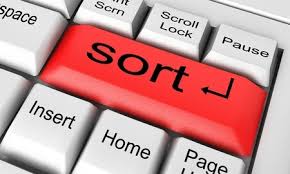 Last weekend’s Open Studios of Beavercreek went well, with a couple more paintings (including Thunderbird, a favorite of mine) finding new homes. Unfortunately, on Sunday I could tell I was coming down with a cold, and I’ve spent the last couple of days sleeping (which I needed), worrying (which I didn’t), or working on projects that I never seem to have the time to do.

The reason for the worrying is that it is inspection time in the world of house selling / buying. On my house, we went into it knowing a couple things would show up: a 40-year old furnace and an electric panel that has always worked well, but for some bizarre reason lenders don’t like. I was SHOCKED, however, when some mold showed up in my attic crawl space. Fortunately, no one was scared off and we have again come to agreement.

On “my” house in Salem, my inspection turned up a few repair issues (significant, but not terribly spendy) and a foundation issue which really worried me. It has taken a week, but the seller has agreed to fix it all; thus it appears the move is on.

This is good because it’s time, according to various timelines, I should be making some serious headway. I have been collecting boxes. I reserved a “pod” to be delivered to the house. I’ve started contacting utilities. And Saturday I have a “de-packing” party scheduled; a de-packing party is something I made up. The idea is that I feed my friends and they help me sort through stuff and help me decide what to take and what can go.

The (admittedly vague) plan is to tackle a room a weekend over the next five weekends. Hopefully, at the end, we’ll load up the dog, cats, and a few unpacked essentials and go. It’s unclear now if the closing in Salem will happen soon after the closing in Oregon City, so I’m trying to keep options open/

What is interesting about this is that I see this whole process as a way to refine the next stage of my life.  I’m hoping to get rid of some baggage (physical and emotional) so that when I’m eventually down in Salem, I’ll have less clutter to deal with.

Bringing this back to art, that issue of clutter is one that resonates with me. Last weekend at Open Studios, I thought a lot about what I wanted to continue down in Salem. In the last few months I’ve given up several positions in organizations, and there is only one commitment still on my plate.

Right now I belong to:

In the future, Open Studios of Beavercreek will only be possible occasionally because of my new location, and the Oregon Society of Artists (based in Portland) will be difficult to interact with regularly. I will keep up my membership in Three Rivers Artist Guild through 2016 because they are helping with the fall WSO convention, but I will not be able to do much more than pay dues. This leaves the Fall 2016 convention for WSO, and then 2017 will be commitment free.

I think I do better not taking on so much, and I’m going to try to to remember that adding commitments is time clutter; time clutter makes it hard to focus on art.

And art is something I definitely want to sort into the “take with me” pile for my new home in Salem.

I’ve decided to use one of the downstairs bedrooms to create a working studio (separate from an office.) With the arrangement of the doors and things, I am hopeful that this space could even be used as an “Open Studio” or other public space to show my art.

But I’m also trying to back burner this plot and work on simply getting moved. Pinterest, however, is an appealing (and somewhat scary) option. Especially when I’ve been stuck for a couple days at home, sick.