Six months ago I was checking out my Facebook feed, which is typically filled with birds, horses, dogs, and art. One of my favorite artists, Ruth Buchanan, posted about lining up her 2017 workshop schedule. I took a chance and contacted her to ask if she ever did workshops in America, thinking if given enough time I might be able to attend one. She hadn’t done an American workshop yet, she told me, but it just so happened she was coming to the States in July. Would I be interested in setting one up?

Thus, a watercolor workshop on horses in Keizer, Oregon, was born.

I hit up my friends and everyone else I could think of to get the break-even eight people. Ruth did her own promo, and by June, we head 10 eager artists to fill up the workshop. Ruth was generous enough to consent to staying with me to keep costs down, which meant a little more work on my end, but I couldn’t have been more excited.

Last Thursday was finally the great day and I went to the airport to pick up Ruth. I felt a lot of pressure on this one portion of the process; either we’d meet up without a hassle and make our way down to Salem… or we’d cruise the airport, missing each other until midnight when we were the only two people there.

I forgot about texting. After miserable traffic made me a little late, Ruth texted me her location and we were together. Things were off to a good start, and she didn’t even make a face when I had to ask the information kiosk how to get back to the parking lot.

There was more traffic back down to Salem, but now we had important matters such as pigments, paper, and workshop business to discuss. We got home a little later than I had originally hoped, but it wasn’t long before we were fed, medicated, and in bed.

The original plan was for me to work for a half day to give Ruth some extra rest, then come back and run a few errands before heading out for the optional photo reference day at Lazy Dog Ranch. It turned out a few more errands were necessary, so I ended up taking the whole day off.

About half the class chose to come down and meet Ruth and head out for pictures of “pushing” cows. Ruth briefly talked to us about the importance of sketching from life and looking for lines of movement. Then the Lazy Dog crew gave us a show.

I had never met the Lazy Dog crew before, just admired them on Facebook. I asked them not to do anything special, and they told me this was just some general work to move cows around, do a small medical procedure on one calf, and then some roping practice. If they had really put on a show, I’m not sure my heart would have withstood the excitement!

I ended up taking over 1000 photos. Ruth says she took 28. She spent her time looking, asking questions, and eventually…

We stayed until nearly 9, two hours after the rest of the class left. I was wondering at this point if I had made a tactical error… maybe I should have put the live horses AFTER the painting.

But Ruth was a professional and Saturday morning got up, prepared to teach and paint. Almost no begging to go back to play with the horses. (It was clear she has more control than I.)

After we got through the first bumps of making coffee, getting set up, and actually starting, Ruth gave an opening lecture full of technical information on painting, value sketches, and horses and then started a demo piece.

She called this start a “grisaille”; she was adding in background color of lights and darks to build upon, but even more interestingly, she was adding gestural marks and “lines” to indicate movement and painting focus. 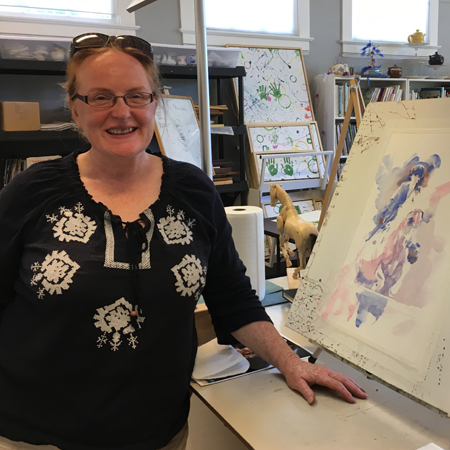 One thing I had requested was a demonstration on tack. I can’t seem to make tack “sit” on the horses; it always looks (forgive me) painted on. I was surprised when she covered this the first day, before adding body color or other details.

These are my notes from this process. I have a LOT to think about.

After the tack demo, Ruth set us our first painting exercise. Three pears were set up and we were to paint them; however, one pear was to be in a single color, one pear to be in two, and the remaining pear was to use three colors.

As usual, I got a little overexcited…

After we were done, we took pictures of our pears and turned them into monotone paintings through the wonders of phone cameras. The point of this was to judge our comfort with color and value. As you can see, on my paintings the 3-color-pears are the darkest while the 1-color-pears are the lightest. I’m not doing a bad job with any, but it emphasizes my distraction with color.

My eventual homework comes back to this exercise.

It must be mentioned, at this point, that Ruth and I hit local restaurants for our sustenance. Of course, the most famous local restaurant is Word of Mouth and Sunday morning we got up early in hopes of getting there when they opened for the first round of tables. We arrived at 6:45 to find the restaurant that opened at 7 already had a 30 minute wait. We decided to stick it out, and this is what that decision netted.

In a food coma, we waddled back to the Keizer Art Association for day two.

Ruth’s second demo was starting two versions of the same painting side by side. The one of the left is a figurative start where the one on the right is an “abstract” start. This was to show the group that you can have similar messages with different effects. 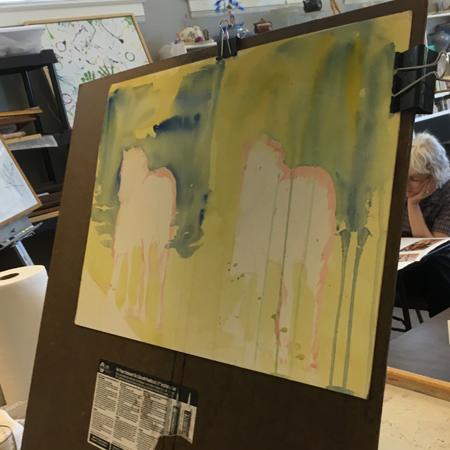 As Ruth emphasized, this was a painting workshop. After a lecture, she made us take those words to heart with a twenty-minute exercise focusing on brushwork, gestural marks, and pushing boundaries. Ruth popped up a reference photo and told us to start painting. She made us change colors, grips, and even paintings with our neighbors.

The point of all this was to emphasize this point: Let the painting BE a painting. There’s a difference between drawing, coloring-in, and painting.Use gestural marks as part of the process. Find the lyrical quality of what you are creating, not just the technical mechanics of copying a subject. She quoted a teacher of her own when she said, “Overworking detail is like public masterbation.” It’s a good reminder for me when I get too down on myself for not recreating every, single detail.

Ruth also gave a passionate lecture on the power of music and warm ups as part of the process. For me, this is a reminder of other artists’ lectures on their warm up routines. In fact, the workshop as a whole emphasized what I have been working on since the Franceso Fontana workshop last September: Value, brush work, and color.

Day three was when it was all supposed to come together. After another brief technical lecture, Ruth concentrated her demo on adding color to the horse’s body in the day one painting.

One thing I liked was that Ruth allowed us to watch or do exercises, so I started the day’s task, which was to do a “3 Rules Painting” from one of her reference photos.

Again, I got over excited and did two 1/4 sheet paintings. One I tried to keep to her reference photo (it was her horse, Atlas) and the other I changed (and messed) up.

However, I took a significant pause once Ruth started applying color to her demo. Another thing I had been excited about seeing was how she was applying paint to get the amazing musculature evident in her paintings. What became evident was that Ruth uses tonal values to drive musculature. Mind blown. Not sure I’m ready for that, but it was amazing to watch.

The last event was for Ruth to take a look at our work over the last three days, including our “3 Rules Paintings”, and do a critique. It was here that it became apparently that there was method to everything she had asked us to do. We had started out where we were (day 1), had been asked to embrace painting (day 2), and then had been asked to pull it together (day 3). I know I wasn’t the only one with a lot to think about on the way home.

After class ended, Ruth and I came back home, she packed up, we had a celebratory glass of wine (half a glass for me, the driver), and then we took her to an airport hotel so she could catch her early more Tuesday flight easily.

On the drive back, I had even more to think about than the rest of the class.

Ruth told me this: “You told me on the first day that you get distracted by color. I want you do do a week of painting in two colors, and then add three colors. Send me a timeline of your work and we’ll go over it.”

As I’ve wandered around the house today, doing chores and errands, my mind has going over this. And I’m still not sure what’s going to happen with this.

Frankly, I’m tempted to leave that as my conclusion because I think it gives a good feel for how amazing the workshop was. It was exactly what I needed and gives me a push to figure out my next steps.

But what’s even more amazing is that Ruth connected, I think, on that same level with everyone in the class. While she set boundaries, the most obvious that this was a painting class, not a drawing class, she had something personal and helpful to say to each person. I was surprised that several people chose to attend, but these were the people who told me what a great class it was. Everyone said that when I invite Ruth back to let them know because they’ll come back.