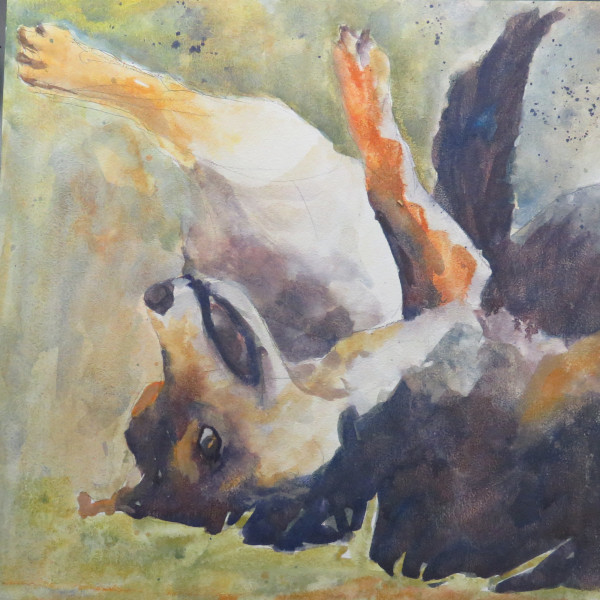 Two weeks ago when I posted, I was feeling nervous. My show was in just over a month and it felt like there was a ton to do. The promo (provided by Salem Art Association) wasn’t finished and they wanted more paintings than we originally talked about. Salem Reads was coming up as well as two nosework trials which would keep me out of town on two critical weekends.

In the last two weeks, I met with the Gallery Director, David Wilson, and he picked out 14 paintings he wanted to add to the “Dogs of Minto Brown” series. In other words, this show will have 26 of my paintings. Gulp. But the promo still isn’t ready (apparently, people go on vacation!) Salem Reads has started and is going full swing. And the less said about the first of the nosework trials, the better.

And I’ve worked a ton on my paintings.

You’ll note that there are 17 paintings. The goal is 12. While many are not completely finished, I feel comfortable enough with the quality that having a few extra gives me a feeling of security. Also, a few paintings have been “taken back” a stage. If I have a chance, I’ll rework them. But it’s getting close enough now that I’m having to budget time.

On that note, I’ve decided not to start any more paintings and concentrate solely on finishing. Next weekend is another dog trial, and the weekend after that I have set aside for sealing and wiring for hanging. Then it’s delivery time.

It’s hard, though. Every artists gets asked the question, when do you know you’re done? The best answer I’ve heard is when there is nothing left that will enhance the work. Not improve or change, but enhance.

1 thought on “When is enough, Enough?”