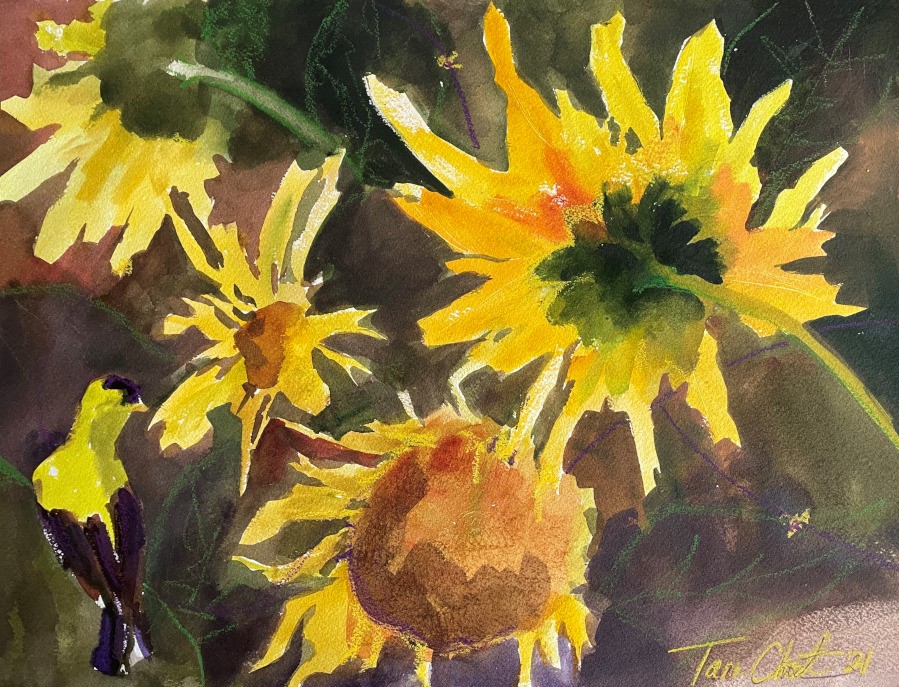 This week I was talking to a friend about COVID-19. And I admitted to her that I am finding this “stage” of this–group project?– to be the hardest yet. She agreed and admitted she was struggling, too. As if the gods were listening, the next day the WSO convention–the first in-person convention in two years–was changed to virtual.

I’m going to pout now. I may even take revenge by shaving my head again in six weeks. We’ll see.

So, without this bright spot on the horizon, I spent most of the weekend cowering in the house away from germs (I’m already sick enough, thank you.) This means that a few things were done. A very few, but I’m going to count them in the win column!

Yesterday I sat down at my easel for the first time in several weeks. I contemplated starting a completely new painting, but I decided to clean up the general workspace area first, which led to deciding to finish (or at least change) these paintings.

On the gull painting, I added a wash of a new metallic paint I picked up. Extra fun!

When going through the images above, I realized I had never shown these paintings, so they must be fairly recent.

On the “Sunflowers” painting, I tried a new technique. Inspired by Leslie Humphrey I “pushed” the paint into shapes instead of trying to paint the objects. I like the effect and think I’ll work on it a little more.

This morning I took Key to nosework class (second week in a row, I am feeling better) and we stopped at Finley. The shorebird migration is going to start soon, and I was hoping to catch some of these hard to ID birds. Well, I didn’t catch them, but I did see some other birds that aren’t always easy to find!

And with that report, I’ll go back to life as usual. Sitting here at home. Doing nothing….