Since I got my car four years ago, I have been unsure about it being gray. I mean… gray? After a red car and two blue cars… Gray?

Today a solution presented itself.

I’d rather go back to gray.

So this morning I had a dentist appointment. It was first thing, but it still meant I left home about 15 minutes later than normal.

As I walked to the car I tossed Finn his treat, got in the car, and backed out of the garage.

As I was backing up I saw that Finn (dorfy dog) had got his treat stuck in his upper palette and was shaking his head and pawing at his teeth frantically.

I turned off the car, hopped out, and hurried over to save him. At which point he ran into the back yard. I caught up with him and fixed the problem, but not before stepping in dog doo.

It took a few extra second to wipe that off, but when I came back through the garage to get back into my car…

There was no car.

I variety of things about thieves, candid camera, and being crazy flickered through my mind.

Then my gaze drifted upward ever so slightly.

Across the street, millimeters from my neighbor’s little red car, my little gray car sat.

My car had drifted across my driveway, across the street, and into their driveway, somehow missing their car by the narrowest margin you can possibly imagine.

In fact, the distance was so minuscule the though of candid camera again crossed my mind.

I walked across the street, dreading what I would see. It seemed impossible my car has missed theirs. But it had.

Then my heart stopped again. My car must have been stopped by their house! They have children! Oh my gosh.

I looked. The car was about six inches from the house.

Next I looked at the tree on the other side of the car, thinking my car must have been stopped by the tree.

The car had missed the tree.

Yes, the car had somehow managed to perfectly park itself between the bushes in front, red car on left, house in back, and tree on right.

I got in, hardly believing it.

The car had broken off a branch of the tree, and a couple of those push in solar lights were the worse for wear (broken), but it seemed that was the extent of the damage.

I would have liked to knock on the door of my neighbor’s house and explain, but all the lights were out and I know they have kids.

I’d apologize in the evening and offer to pay any damages.

So I drove off to the dentist.

All along the way I kept thinking, “Gosh, traffic is noisy today.” But that was all.

I got to the dentist and made my appointment. No cavities.

As I was walking back out to my car I finally saw it. The little window was broken. 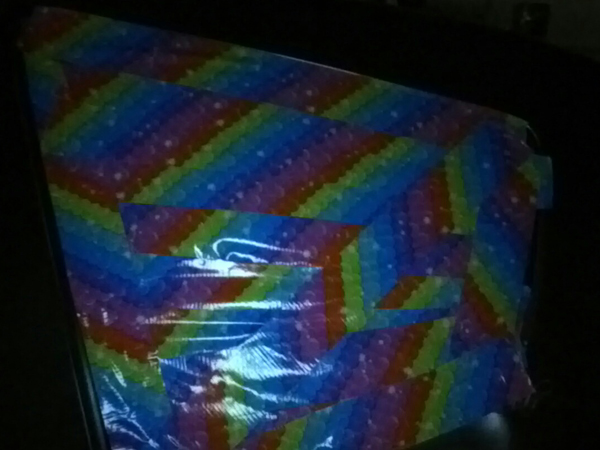 And thus, my technicolor window is born.

To get it un-technicolored will cost $230.

But someone suggested that maybe I should go buy a lottery ticket because I did get off pretty easy.

Oh, last part of the story.

When I got home in the evening, I went over an apologized to my neighbors. They said they were glad to know the story, because they could tell something happened. But they said the lamps had been free from their dad and the branch was just a branch and didn’t want anything. 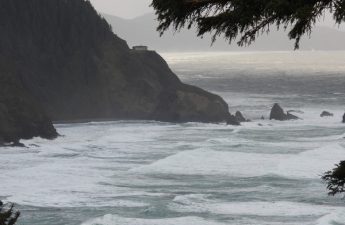