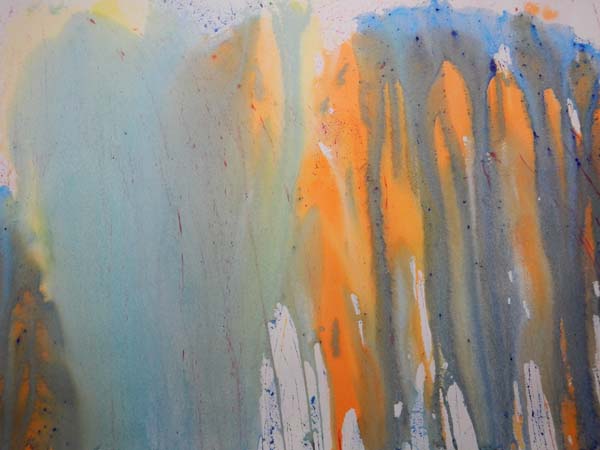 Last night I got ally my paint and paper ready for another round of ice painting. I was so happy with Friday night’s work that I had some ideas for a few more paintings.

What I didn’t realize that was (according to the records) it was only 33 degrees (I thought it felt warmer.) Comp[are that to 19 degrees the night before.

The results do show the difference. While I got some good results, they are essentially just “pours” not real ice painting.

Apparently up in Portland it’s remained a little cooler because several of my Facebook friends went out this morning and got good results. Among ourselves we have a few more tips to share.

I think that’s the end of this round of Oregon ice painting. This whole episode has not helped with my goal of finishing paintings by the end of the year, but there’s a saying about making hay while the sun is shinning that seems applicable here.

Here are the results of last night’s session.

I started this painting a while ago and just got stuck. I hoped adding some texture would help.

Other than having very little texture, I like start on this.

Well… I can’t actually show you, now can I?

This one is going to be another painting about horse shoes and legs. Though I was hoping for more texture, I like the way the start came out.

Orange Start 2 – Closer to the Goal

I think that’s all for this storm. I’ll have to work hard to finish these starts so if there is another storm this winter, I’ll be ready to go.