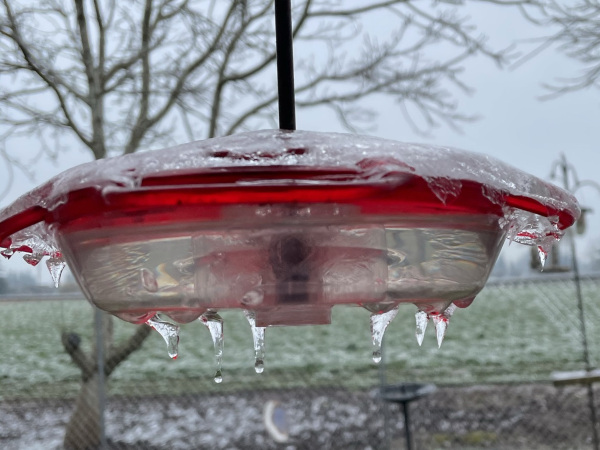 With the President’s Day holiday, this will be a four-day weekend for me. I hadn’t been down to the beach house for a while, but a weather event was heading our way and it made the decision more difficult. I haven’t been able to do any ice painting for more than five years. As a reminder, this is when an artist takes advantage of extremely cold weather to apply paint to paper in hopes of getting the paint to crystalize and create texture. It needs to be really cold for ice painting to work, and while a storm system was coming, the temperatures were all predicted to be high 20’s-low 30’s. With this in mind, I decided to leave for the beach Wednesday night and take advantage of some quality time for painting. I worked Thursday, then got up Friday to go to the South Jetty in Newport. There had been reports of snow buntings and snowy plover, and the birding is always excellent.

While my target species did not appear, when I drove in, I did get a surprise.

In addition the pleasure of seeing elk, these photos really show how wet and miserable it was. It was cold with a wind and raining in the kind of soaking manner that gets into and on everything. Any two of these conditions are doable, but all three created a truly heinous combination. Though we did go down the jetty, it wasn’t long before we were back in the card with the heat on and the defrosters fighting to kill the humidity.

We did some car birding for the rest of the morning and had some really nice spots.

We drove around the north Yaquina Bay to Toledo, which has some of my favorite marsh views.

Cold and wet, we returned to the beach fireplace and I tried to decide what to work on. My friend, Sandra Pearce, has been working on Yupo lately, and it’s probably because of this and the weather that I felt drawn to finishing two images that had started out as ice painting experiments on Yupo.

I was so pleased with this, I took out another start and played with it.

Flushed with success, I decided to try the inspiring coastal marshes from earlier. 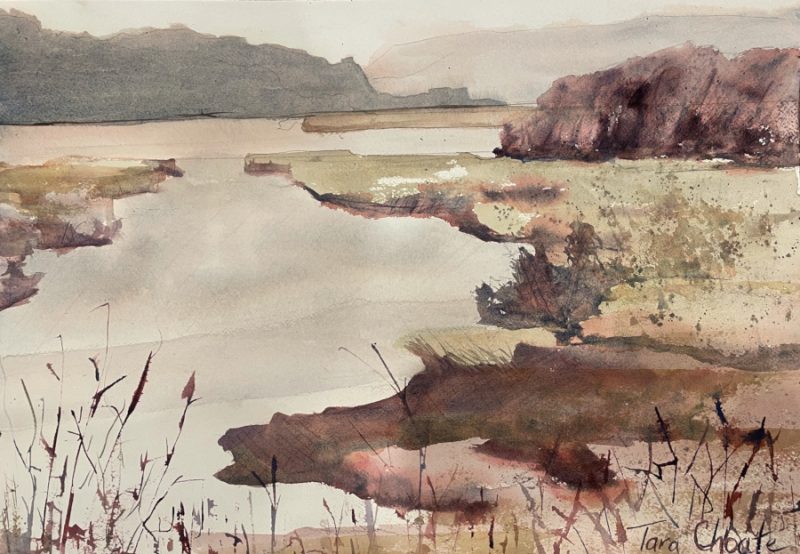 While this is not finished, and there are things I like, I don’t think I will count this as a tremendous success for one simple reason: I forgot about design. I’ll put it on my board and ponder it for a while.

I decided to go back to playing, so I took out some newly purchased Sumi ink.

I hadn’t used this before. There is something luscious about putting down the ink and also about getting such a dark line.

I had intended to return to Keizer on Saturday evening, but the Van Duzer corridor was closed and the weather indicated that the trip once I got over the mountains would be in freezing to near-freezing temperatures. I decided to wait until the morning. So, I got up this morning, checked the conditions, and hit the road. Because the Van Duzer was still closed, I had to go south through Corvallis before coming north up I-5. The weather was 38° clear through Corvallis, but once I started north, began to gradually lower. When I hit Salem, the ice was fully visible and the temperature was 33°. As I drove through the neighborhoods to home, the trees looked as though an angry giant had stepped on them. They were crushed, bent and broken. When I arrived home, I was relieved to find my power on and no big damage. My neighbor, however, wasn’t so lucky.

A little while after we arrived home, the city of Keizer came and removed the tree from the road, but they just pushed everything to the side. He’s still going to have to deal with the debris. I’d feel bad, but with our history, I’m afraid I don’t. 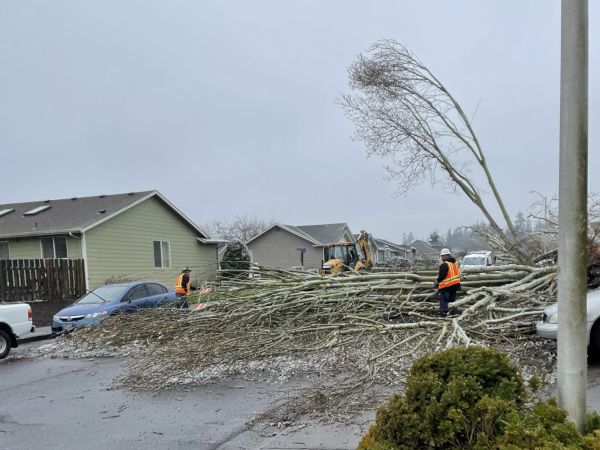 Everything is covered in ice. Up in Portland, they got eight inches of snow, but here, it’s all ice. The weight combined with the cold and wet and the wind was just more than the trees and bushes can handle.

Sometime over the last few days, we lost power, but it’s up again now. I have several Salem-area friends who have been without power for a couple days. I offered to let them come over and partake of the heat, but so far, they are staying home. I hope, where ever you are, you are able to stay home, stay warm, and stay safe.