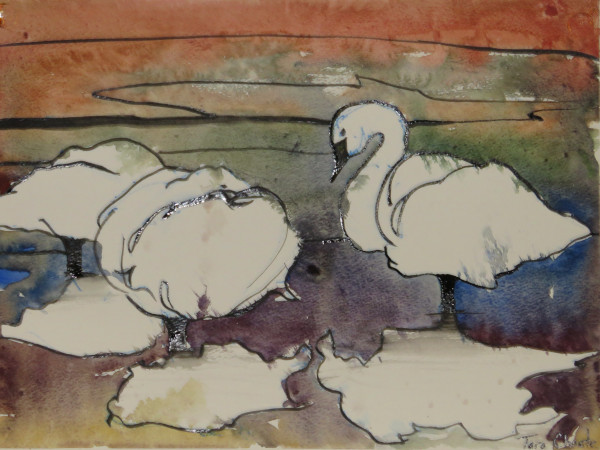 What a week! I had tummy trouble, neighbor shenanigans, and a phone uprising. After all that, what’s there to do but apply paint?

This happened to be my three-day weekend, so I actually did other stuff. Friday I took the dog for a hike and went to a variety of appointments and errands.

Saturday morning I got up and went to bird Ankeny. All the Willamette Valley NWRs are great this time of year, and it’s sometimes hard to choose, so I tend to migrate between them. I didn’t find anything earth-shattering, but I did get photos of an unusually cooperative heron and a Canvasback (only second time I’ve spotted that one, anywhere.)

Sunday, the early-morning fog stymied me, so I settled for a nice backyard feeder watching session.

Even this nice bout of birdwatching couldn’t get me completely over my funk. What I felt like doing was just applying paint to paper. I didn’t want to draw. I didn’t want to plan a painting. I wanted to put the bright paint onto the white paper. That was it.

As such, this was my work over the weekend.

Nothing show-worthy, but I had a good time. Gonna call that a success.

We make our friends; we make our enemies; but God makes our next door neighbor. ~ G. K. Chesterton

I’ve always been pretty fortunate with neighbors. Yes, a few have been loud. A few haven’t kept their houses up. A few just generally made me question reproduction criteria. But, generally, it’s been okay. As you know, I moved here about six months ago, and the neighborhood has proven to be tidy and quiet.

The first neighbor to great me was my neighbor to the west. As I was moving in, he came over, introduced himself, asked if I was an owner or a renter, grunted at my answer, and left. And that’s all I’ve heard from him in six months. I’ve waved a few times when I’ve seen him.

Actually, I’d like to add to that statement. I did speak to him one other time. Over the summer, Key spotted a racoon one night about 3am and ran out to guard the joint. He made A LOT of noise. The next night, the same racoon was back. I grabbed Key after a bark or two, dragged him into the house, and locked us all in. The next morning, the neighbor came over to ask me to please not let my dog bark at three in the morning “every night.” I apologized profusely, explained about the racoon, and I’ve kept the doggie door shut at night from then on. He said, and I thought it was a weird comment, “There isn’t a racoon every night,” before stomping off. I was on a Zoom call for work, so I couldn’t really pursue the conversation.

November 20th, I went into the backyard to do a dog cleanup for the yard guy. When I was doing that, I spotted a plastic container filled with green fluid that looked A LOT like antifreeze. It had clearly been slipped under a gap in the fence. I pondered this, but threw it away and made a mental note to repair that second of the fence as soon as possible.

Then November 29, I went outside and spotted this. 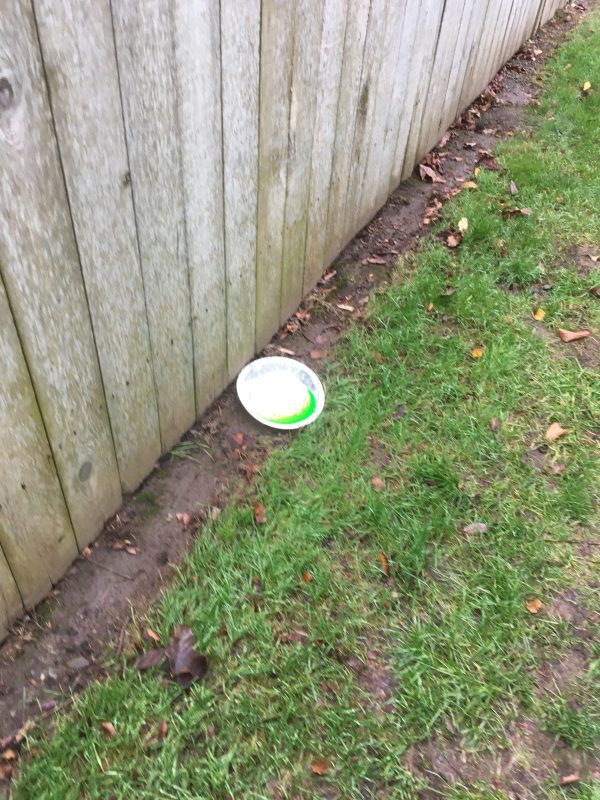 I was stunned. It was the same liquid as before (I think.) But I just couldn’t imagine what was going on. I pushed it back under the fence, went down and bought some fence stakes, and figured I would fix the fence on the first nice day. Later that day, I spotted one of the women who live there and asked her if she knew anything about the plate. She said no.

Wednesday, the weather turned and it was cold and clear. I made arrangements to take a break during the day for fence repair. At “lunch” I went into the backyard and drive stakes every twelve inches along the fence. Then I disassembled a second of the fence where the cross beams had completely rotted away, leaving the slats standing up mostly by habit. This little job had been on my list for a few months (since I had first spotted it), but it hadn’t risen to the top because I didn’t think it was urgent.

When I took down the fence, I found an “anti-bark” device installed on the fence.

Huh. Okay, clearly there was a problem.

I finished the fence repair and went inside to Google what to do and worry. I ended up calling the police (non-emergency number) and talking to them to get advice. Not surprisingly, there isn’t much they can (or at least will) do. They encouraged me to talk to my neighbor, which was the advice of the websites as well.

After sleeping badly, I went over to talk to them at lunch the next day. I had spoken to a friend who is good at mediation and facilitation (she likes that kind of stuff!) about what words to use and I was prepared to ask them to “help me understand” the problem.

When I made my foray, their garage door was open and the same woman as before was inside, smoking. I had been hoping to talk to the older gentleman that I had first met, but I would take who I could get.

She confirmed that her dad didn’t like the dog and had put up the barking stuff. But she said she didn’t know about the plates and contended it was just trash. She also said she didn’t think the dog barked at all anymore, though he did in the first few weeks. I don’t know about “at all” but this generally agrees with what I think, especially as I’m working from home so much. I begged her to please let me know if there was a problem. If they have a concern, I will try to fix it. And went home.

The next day I saw the gentleman while I was taking Key for a walk. I made a point of saying hello. He said hello back, but it was a pretty bland exchange. I noticed that day that the anti-bark device had been reinstalled on the fence.

I am not sure I can do more. I have a reminder for myself to check the yard before letting Key out. The kittens are 100% indoor all the time.

I posted this basic story on Facebook during the week (partially for documentation purposes), and the outpouring of care and concern was a real balm for my soul. Thank you, friends. 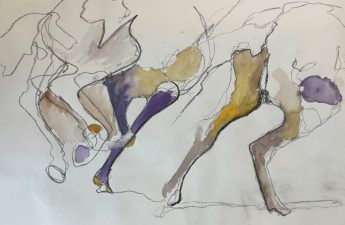 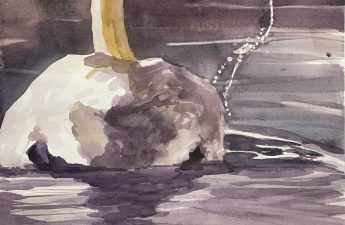