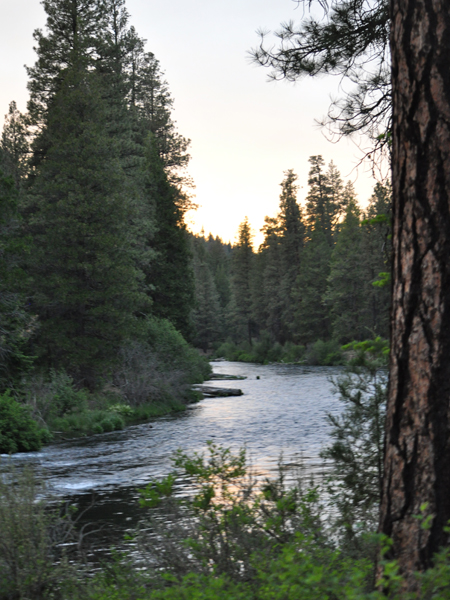 For the last few years it’s been on my goal list to go camping, but with one thing and the next, summer has come to an end without the camping gear breaking out of its box. When I saw the East Cascade Audubon Society was having their birding festival (Dean Hale Woodpecker Festival) the first weekend in June, something inspired me to log onto Recreation.gov and find a camping spot.

We drove over to Sisters Friday night and after a few false starts, found Allen Springs Campground. 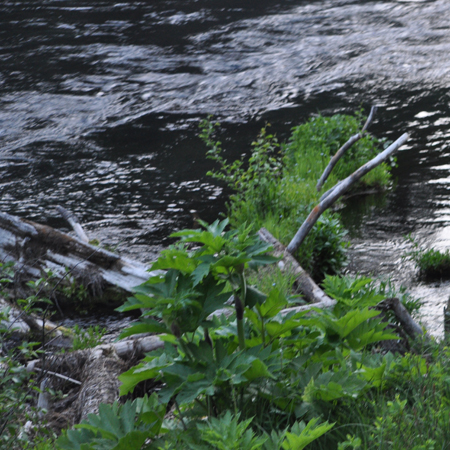 My photograph of the camping spot didn’t turn out because I had the camera settings wrong, but it was GORGEOUS. Every spot had a river view and there was a lovely short hike just outside of camp. The site is along the Metolius and only fly fishing was allowed. 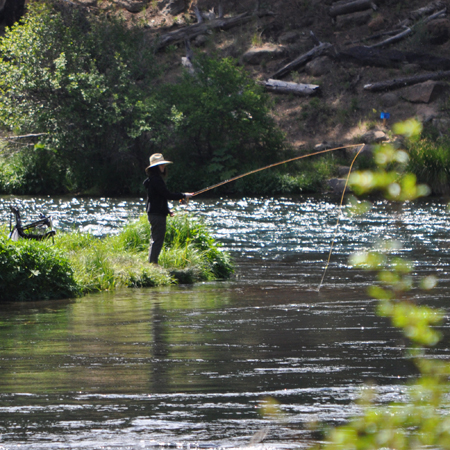 After we got the tent set up, we took the hike. Just a few hundred yards down the path we found the remains of a deer. It was fascinating because all that was left was this spine and the hair. That was IT! 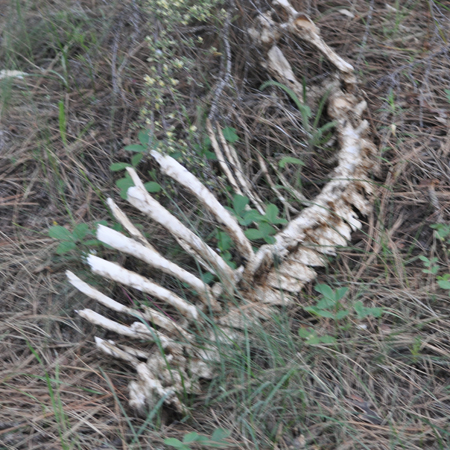 There were also these knarly cocoon things around that had both bugs and caterpillars. 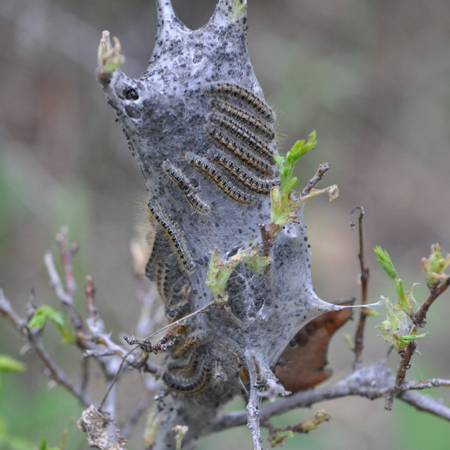 The wildflowers were blooming, including the sage.

After we got back from the hiking, we settled down to watch the river and veg out. 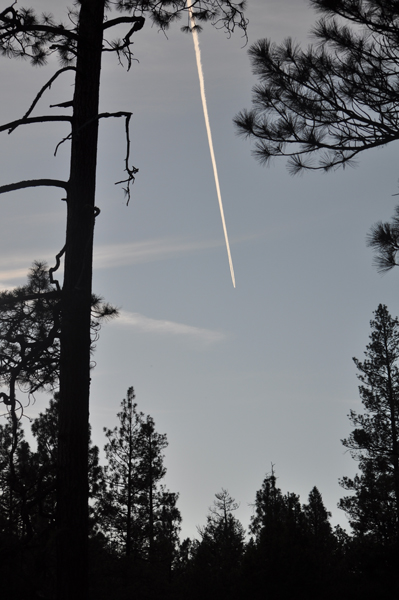 Saturday morning we got up early and headed to a couple of spots the Audubon Society had listed. Deer were everywhere at this time of day, including the parking lot of the coffee shop!

My real goal was to spot woodpeckers. I’ll save you the suspense; the only woodpecker I saw was a Northern flicker. Still, I wasn’t completely skunked. I saw a Calliope Hummingbird, a Red Crossbill, and a Western Tanager as well as few birds I’ve seen around here, but I still enjoy seeing.

After birding for a while, it got too hot, so I decided to drive through Whychus Canyon (a preservation site) and then ended up basically lost and down by The Cove Palisades State Park. This meant to get home we had to drive down the rocky canyons to get back over to Redmond and then back to our campground.

Along the drive I came across this awesome blue roan draft horse. He was friendly and let me pet him as well as photograph him.

As far as birding, it hadn’t been a great day. Most of the birds I had seen, I wouldn’t have seen if I hadn’t come across an Audubon group and tagged after them for a while. Because I had Key, I assumed wouldn’t have been welcome, but they were very gracious and invited us along for a while.

Speaking of Key, he had a blast and garnered a new title. Key was in dog heaver because there were squirrels, chipmunks, and other rodents EVERYWHERE. 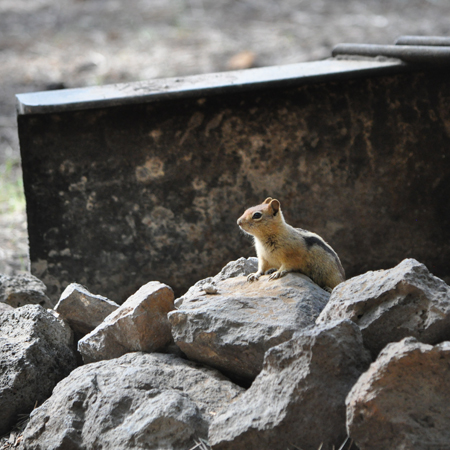 Key spent a lot of time explaining the dangers of this. 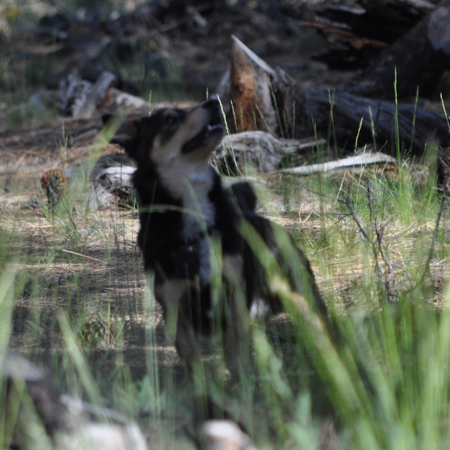 But I remained disappointingly unmoved and found these visitors charming. 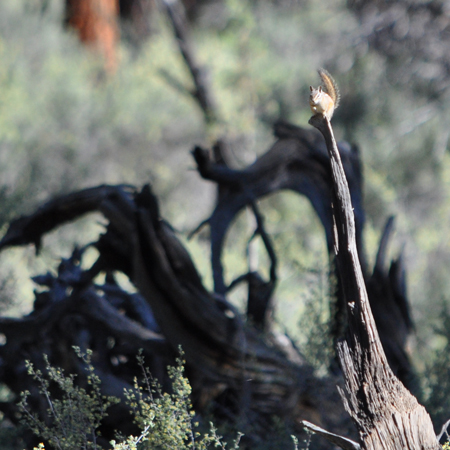 Then… the incident occurred. After returning the camp, I put Key onto the long line and let him out of the car. He DARTED toward the tent and I thought, “How cute, he knows where he is” and did some unpacking. A few minutes later I realized I hadn’t heard back from my companion and followed the line to where Key was staring at… a dead squirrel in our tent. The tent was basically okay, but Key’s dog food bag had a big hole in it where the squirrel had helped himself. Obviously, this was too much for Key. He had dispatched the intruder and was now wagging his tail, proud of his accomplishment. I was less impressed and after disposing of the body took Key on another hike.

All this activity had the desired effect, and Key was tired at the end of the day. 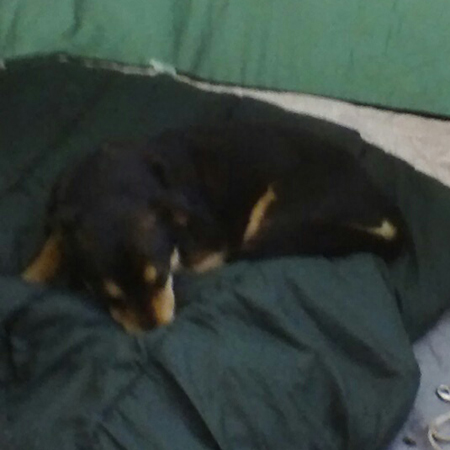 Sunday morning we woke up and broke camp after another hike. These pictures are various pictures of the area around our site over the three days, but you get the idea. I wished so many times for my painting gear, but I assumed that with the birding I wouldn’t have time (I was right, but I always thing I can do everything.)

I’m getting back on Reserve America to see when I can go back! This time I’m taking my painting gear!

3 thoughts on “The camping gear escaped”