They say that the unexpected adventures are part of the joy of travel. It’s possible, but I don’t think that’s going to do much to persuade me that today was worth it.

Today was the final day of the Peggy Judy workshop, and Peggy had arranged for us to have a “cowboy” photo shoot at a ranch down in the Dominguez-Escalante canyon. 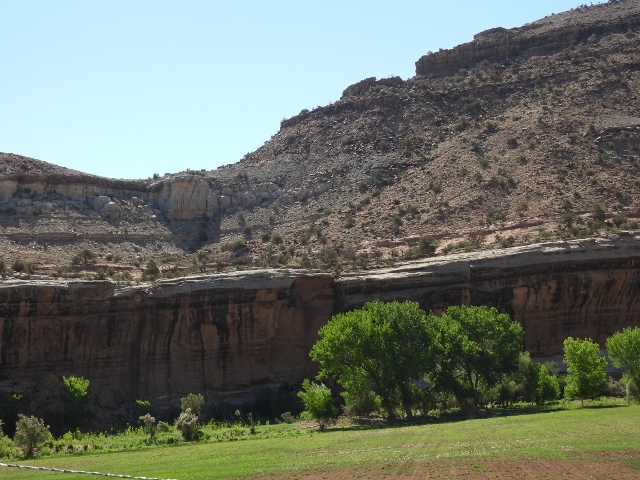 Now, imagine this. You are at the bottom of a deep canyon. There is no cell service. No internet. You are at the back of convoy that is going someplace you don’t know. You feel honor-bound to get your passenger to the destination, but the logical and sensible voice in you is saying, “Okay, slow down. Let’s think about this.”

Fortunately, my passenger was a good sport. When we found a little campground/pullout, I pulled in and eventually arranged the car so we could see the road when someone from the convoy came back for us. I took a deep breath and prepared myself to do what I intellectually knew I could do, but had only ever done in a controlled situation: change a tire.

In an AMAZING stroke of good luck, two young guys who were camping came RUNNING over and offered to change my tire. Now, frankly, I was tempted to stand on my honor as an independent woman and insist on doing it myself. But…

And such, the heroes of the adventure arrive. I only managed to get a picture of one of my heroes (and forgot the name of both, unfortunately) but trust me… they had capes!!!!!!!! 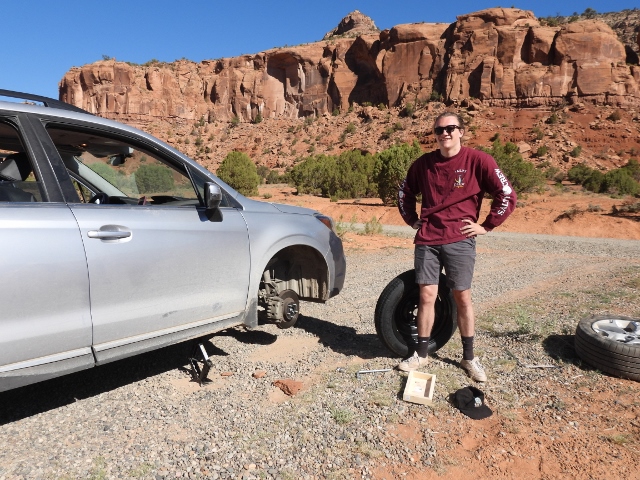 The guys finished and we were just getting back in the car when Peggy came back for us. I explained the situation, transferred my human passenger over to her car so she could partake of the photo shoot, and limped my way out of the canyon and back to town. Now that I could take (and did) a  more leisurely pace, the scenery was stunning.

I even saw some wildlife on my way out.

Once out of the canyon and back to town, I used my phone to find a tire solution. Being Sunday DID NOT help my cause, but Walmart was open. Their team was awesome and Key and I waited in a shady parking lot island with a lot of water until a new tire was purchased and put on. Yes, the tire was dead. I’ll be talking to Les Schwab when I get back home!

At this point, my car was a mess because I had rearranged it to get a passenger and (now) a useless tire in. We went back to the workshop location and enjoyed some cold water, lunch, and the adventure with the group. But frankly, I was spent. Done. I had used up all my composure and concentration for the day, and I just didn’t have it in me to do more.

So, I chatted and passed around cards with a few of my new friends. Packed up when several other people were also saying goodbye, and then made my way back to the A/C of the hotel. I need to unpack and repack my car to accommodate the (wet) paintings, ruined tire, and the other flotsam accumulated on the trip.

Thursday, I’ll head home. A day ahead of schedule, but I’m good with that. Frankly, earlier today I was debating doing the nearly 18 hour drive on Monday and just ending all this. But I’m trying to not let a single day spoil my mood.

I miss home and the kittens.