A couple of weeks ago, Key and I moved up in the run order and thus got into a nosework trial. I was excited and pleased. The drive was about 2.5 hours (not bad) and Key has been really strong in practice lately. My goals were to watch my dog, look for an alert, and keep my mouth closed otherwise.

The day turned out to be a disaster. I had some sort of anxiety attack, and we ended up leaving the trial after 3.5 (of 6) runs. On the long ride home, I thought about what had just happened. I had the best dog in the world and I had let him down.

But… well, I felt there was more to it than that. In my opinion, the trial pathways had been laid out exceedingly poorly. There were certainly dogs who would have been okay, but I have to watch him very carefully and keep an appropriate distance from other dogs. And there were certainly people who would have been okay, but having so much going on in a small area had affected me. I got home and called a friend, who was a good listener (hello, L).

That evening I woke up around 2am and all I could think about was writing a letter explaining that what had happened at the trial was not acceptable. When I got up the next morning, I did the minimal amount of morning things, then sat down to write a letter.

To whom it may concern:

My name is Tara Choate and I have a dog, Key. We enjoy doing nose work. Key is a dog who has come a long way; I am his fourth owner. He has problems with reactivity , both to dogs and humans, as well as a general terrier-like attitude about the world. He also has separation anxiety, so we walk a fine line.

I am a human who also has come a ways, but I have a long way to go. I have social anxiety and struggle with my mental health. Things with a lot of people tend to be challenging for me. If I were younger, I might have been diagnosed “on the spectrum”, but that’s just speculation.

I want to emphasize that the point of this letter is not to complain or blame anyone; I am simply hoping that some elements of trials can be improved.

On ***, 2022, Key and I went to the ***, Oregon trial. It is a lovely site. The weather was cold but beautiful. In case you are not familiar with the trial site, I am placing some screen shots taken from Google below. 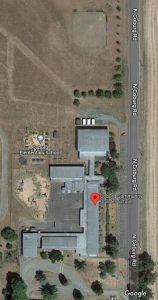 Everything should have been right in my world, but I had a bad mental health day. 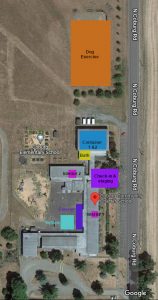 My first trigger happened before the trial started. After arriving, parking, and using the bathroom, I wanted to take my dog out to exercise. As you can see by the photos above, the sidewalk area is very narrow. All dogs had to go down the sidewalk to get to the potty area at the end and there were a lot of dogs out and about. Just before we got to the potty area, there was a group of people who were exercising their dogs in a way that made it very difficult to get past them and to the official area. One we got to the potty area, I settled down again. We were able to navigate in back of the cars (though close to the road) returning to the car. 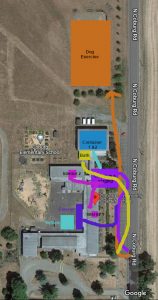 My second trigger was the briefing.* Trying to get in past all the people who chose to stand in the doorway, not allowing anyone else to enter, triggered my anxiety. I spent most of the briefing doing breathing exercises and trying to settle myself down. The corridor was very small and quarters tight. COVID concerns aside, there were the usual problems with people complaining about not being able to hear.

My third trigger was the first run of our day. We were #17. One group started at #1 and another group started at #12. The second group had some problems getting started and it became apparent to me that our number might be called sooner rather than later. Sure enough, 12 went, then they called 13-16. #16 was a golden retriever who promptly went past the number flippers. The volunteers called for #17, so we went up. Then dogs #13-15 came and were put back into the run order in front of us. At this point, there were two to three dogs from group 1 and four dogs from group 2, in addition to Key and I. Additionally, volunteers and the people using the bathroom were moving through the area. On the edge of all this, dogs and handlers wanting to move by to use the potty area. Quarters were too tight!**

The same basic thing happened when our number was called for the second run of the day. Numbers 13-15 were late, then inserted into the run order. This time I wised up and just left to go back to my car rather than struggle with the staging area. While Key and I were there, #18 expressed frustration with me because my number was on the flipper. What #18 couldn’t see was that number 13 was “in the box” with 14-16 waiting to go.

During the lunch break, at which time we had run three of the six tests, I left the grounds to go to a nearby park. Key and I walked around, and I gave myself a lecture about relaxing and having fun. I also tried to come up with a way to deal with the staging area, which seemed likely to stay busy, but I can’t claim success.

The final straw came just before our fourth run. There was not the scrum of dogs, so that part had been sorted out. But there was some kind of incident that had #16 waiting at least 10 minutes.*** The staging area was busy, but not overcrowded, but this time there was a Belgian Malinois who was barking.**** I am assuming the dog was about to run, because they didn’t leave the general area. The area did not feel safe to me. Once we got inside and into the “next” position, I was sitting in the chair, fooling around with Key and working on our tricks. Key is very cute, and I was working on shake. A volunteer came by and said, “He’s so cute” and rubbed him on the head without asking. Key gave her a look that in prior situations has meant he is preparing to snap or bark.

When we were called into the search, for the first time that I can remember, Key didn’t want to search. I am 100% sure that he was reacting to me. He wouldn’t “move off” and instead just kept his eyes on me. He has NEVER not searched before. In the third run of the day, we did a blank exterior search and he got first place and was BEAUTIFUL.*****

I called finish in our fourth search when he found something (not before getting our second “no” of the day) even though we hadn’t searched the entire room just so we could end on a high note. I took him back to the car and told the volunteers to cross us off for the rest of the day, then went home.

At home, I thought about the day. The dog was fine, it was me who was a mess. And, yes, I need to work on that. But…

One of the things I have always liked about NACSW was the emphasis you put on keeping the dogs away from each other. The emphasis on giving the dogs the space to do their job, not have to interact with humans and dogs. I understand the searches are designed to mimic real-life situations. Obviously, a police dog can’t get reactive in tight quarters with a bunch of people around. But the basic situation and traffic flow of this trial really seemed off.

I know there are many, many things I don’t know about what is going on behind the scenes. Concerns about sightlines and volunteers and property and stuff. However, I think this would have been a better way to set up the trial site. 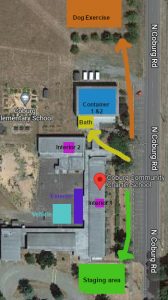 The biggest problem would have been people seeing the flipper numbers, but that was an issue in the original flow anyway.

I know that everyone complains about everything. And I feel bad about complaining about such a lovely site with such nice people. But I needed to express that it doesn’t feel right to ask my dog to work for me, when I can’t be there for him. I let the team down because the environment was too much.

I want to advocate for event planners to think about people like me who find the environment too stimulating and for dogs like Key who have come a long way, but still have to trust their handler to ensure their ultimate safety.

*I am not sure why NASCW is still doing the morning briefing. It seems like topics could be covered in a video briefing. I LOVE the virtual walkthroughs.

** Aren’t we told to keep our dogs in the car unless they are exercising or about to run? Why were there so many dogs around?

*** I would actually guess 20, but I’m trying not to exaggerate.

**** It seemed like at Key, but it could have just been in excitement,

***** He deserves a much better handler than me, but I think he’s stuck with the one he’s got.