About a year ago I went out to the Woodburn Tulip festival with my family. We had a good time, but they wanted to do more shopping than I did, so I staked out a nice shady spot and people watched for a while.

People watching is a delightful sport. It’s a lot like watching clouds for shapes or the waves for horses; the stories are only limited by your imagination. 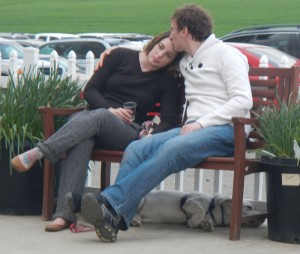 During this period my imagination was captured by this couple and their dog. I particularly liked the dog who showed various levels of contempt for all the lounging about by his humans, but stretched out under the bench for a good nap.

I took some reference shots and then concocted a story.

In my (imaginary) story the man and woman were in a new relationship and the dog was disgruntled because of all the attention his human paid to the new hotsy-totsy girl.

I started to wonder… could I portray this story visually?

My first attempt got distracted by the tulips, which initially were the most interesting thing to paint. Once I realized that I was more interested in the tulips than my story, and that neither was coming together, I abandoned the attempt. Unfortunately, I cannot find the abandoned painting to show you. 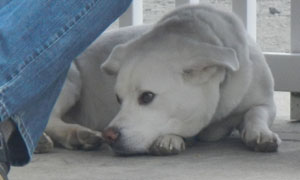 After taking Beth Verhayden’s class I was inspired again to try to paint the story in my head.

For this attempt I abandoned the tulips and started with a neutral-to-green base, thinking that green with jealously might be the way to go.

I’ve labored long and hard over this painting and there are things about it I like. I like the background. I’m pleased with the tenderness I see between the couple. I love the jeans and shoes on the man.

But the story hasn’t emerged for me. I could live with this, but I find myself also disliking the painting for its morbid tone. I’m more used to painting bright colors and this painting feels subdued to the point of death.

One thing I didn’t do that I wish I had is that I painted my background over everything instead of saving certain areas for purer color. The result is definitely a certain color consistency, but it’s also a result that doesn’t match what’s in my head.

I’m ready to accept this painting as a failure, but I’ll put it on the shelf for a few months and then take another look. Occasionally things change with time, but usually when I’m this unhappy the only real solution is to start over.

I’m not sure I have the strength. This just may be a story that goes untold.

I’m trying to console myself that I did the best I could and that I was trying something new with this painting.