This weekend I ran away from home to Redmond, in eastern Oregon. As usual (at least for me) where I was going was a different place than I thought, but the great news is that I found it okay and got settled on Friday night in time to go exploring (more about this in tomorrow’s post).

Saturday dawned and I headed out bright and early to greet it. The rules of this painting competition gave all the painters from 8am-1pm to start, finish, and frame their painting. After turning in the painting, the paintings were judged, award winners selected, and the top 25 finished paintings selected to go to a show at the Redmond Airport.

One of the things I was excited about on this journey was the opportunity to see nesting Golden Eagles. While I did see several of their ten nests (only one is occupied each year, the others are territorial markers), of course no Golden Eagles showed up to pose for me. Just so you know, each nest is about the size of a mattress. 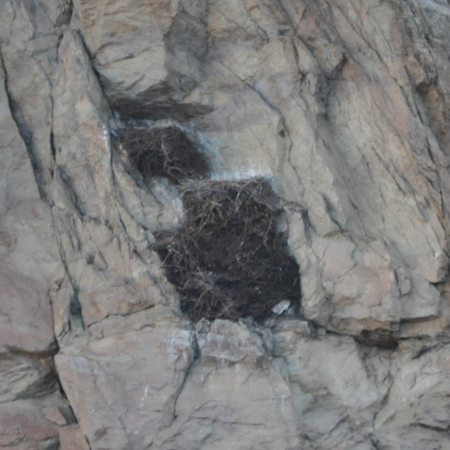 I selected my painting view for the day, hoping to see the elusive eagles. I wore my hiking boots (good choice), lots of water (another point), and even dragged out my shade tent (worth it, even thought it was a very pleasant day). On the demerit side, I left my paper at the stamping station to set all this up (they don’t stamp until 8:00am so no one gets a head start) and someone inadvertently walked off with it. So, in spite of getting up early and diligently setting up, I still didn’t get started painting for 45 minutes after the start.

With some effort, I shook it off and began work on four pieces. It’s typical of me to work on multiple pieces at once, though most painters will concentrate on one (or two) pieces. My fellow WSO-ers Jayne Ferlisch and Kim Smith worked on one full sheet piece for their painting. I worked on four quarter sheets. And felt like getting one up and framed was pretty good.

Below I have arranged each one as a progression so you can see my process.

I blocked out this piece first. I added the vultures toward the end to add interested to the big open area.

This is the second piece I blocked out. I think I got a little more handle on the composition at this point.

One of the notable things about the early morning is that there were no clouds. Then airplanes started going over, adding a little interest. It was amazing watching how fast those clouds moved, though. I was trying to capture that.

When painting en plein air (outdoors) the light changes very rapidly. With this piece I was trying to re-concentrate on the rocks and the shadows.

So, which one do you think I ended up choosing to enter in the show?

And I’m delighted to report… 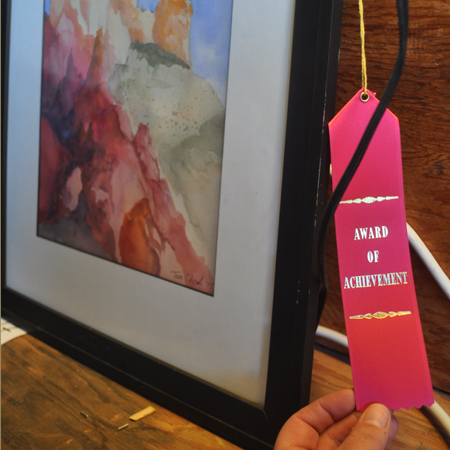 That ribbon means that my painting made the top 25 and is selected to go into the show.

Fellow WSO-ers Jayne and Kim also made it into the show, with Kim even winning third place with her full-sheet piece.

Proving that you should always read the directions for these things, however, I soon found out that to actually BE in the show, I would have to retrieve my painting and turn it to the Redmond Airport on Monday. Luckily the AWESOME Jayne (who not only paints, but plays bagpipes (how awesome is she)) saved my bacon and offered to take my painting.

This is a great event and I’m already thinking about doing it next year.

P.S. More over the next three days about what I saw and pictures I took while on this little break.