It’s been an intense few months. And I’ve been burning the candle at both ends. So on April 26 I started a ten day vacation that was arranged around a workshop by Skip Lawrence. This workshop was organized and put on by the frequently admired Ruth Armitage, who counts Mr. Lawrence  as one of her greatest influences. Over the years, I  have heard a great deal about his workshops and I had resolved to attend one if at all possible.

If you look at Mr. Lawrence’s website, you might be surprised I have this ambition. I will admit, his current painting style does not fill me with admiration, though I do think it has a very modern aesthetic that is currently fashionable in high art circles and museums. What I was wanting to gain from the workshop, and indeed what I heard his workshops excelled at, was help in taking “your” paintings to the next level. Again and again, I  had heard people talk about how good his composition instruction was and how he pushed artists out of their box to try new things.

I knew this wouldn’t be a workshop about new techniques and subject, but about why I was doing art and how I could improve. I thought this would be a good time to take the workshop; artistically I’ve reached the point where I can exhibit basic competence with paint and design, it’s the development of ideas that is challenging. My summary: Experimenting with ideas and stuck on composition issues.

Bright and early on Monday morning I got up and headed for exotic Wilsonville (30 minutes away). The class was full with 25 students of various abilities hauling in equipment and ideas. I saw many people I had never met before, but a few I knew (hi, Janey). After introductions, it became clear this was quite a workshop, with artists from as far away as Salt Lake City, Seattle, and southern California. Luckily, there was another gal from Salem (Kathy) and we decided to ride back and forth together, which added a fun element and allowed some processing time in the car. In spite of the geographic distance between some of the participants, it quickly became clear that all of us were looking for about the same thing I was: a push in the right direction.

After introductions, Mr. Lawrence gave us his first lecture on the importance of MOSTLY.

Ask yourself, this painting is MOSTLY… select the obvious dominant element.

With that laid out, Skip asked us to work on our ideas, paying attention to UNIFYING a painting through DOMINANCE. In spite of my expectations, he was quite dismissive of the idea of composition, feeling that was all about design tricks. Unity and Dominance were what to work on this week.

He also gave us these studio rules from Wolf Kahn:

During the introductions and lecture, I  had worked on a variety of value sketches and eventually moved onto painting.

With the idea of focusing on dominance, I worked on these paintings for the rest of the day.

Yes, they are hideous. And in most cases I can’t even say there is a dominance. So, I ended the day by starting on this painting. 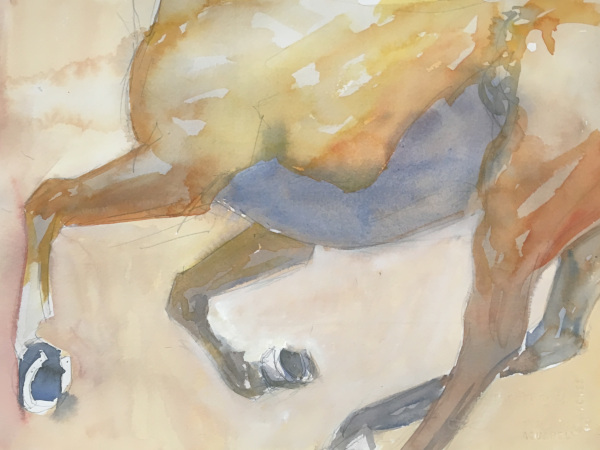 Thank goodness for going home. That night I gave myself a pep talk. First of all, workshops are a BAD place to expect good art. In fact, it’s probably more productive to come out with hideous pieces because then at least you are trying something new.

Also, it was a chance to reconcile that this would be a class with a lot of “free” time to work on your own ideas. Some workshops have a lot of “parts” and “exercises”; other’s don’t. As this was clearly the later, it was better to work on a known idea such as my horse legs series rather than try something new.

With that in mind, when Mr. Lawrence told us the day’s focus was, “Thinking about contrasting things OTHER THAN VALUE”, I set out some parameters and went to work. Each set of paintings is on a single sheet separated by tape. 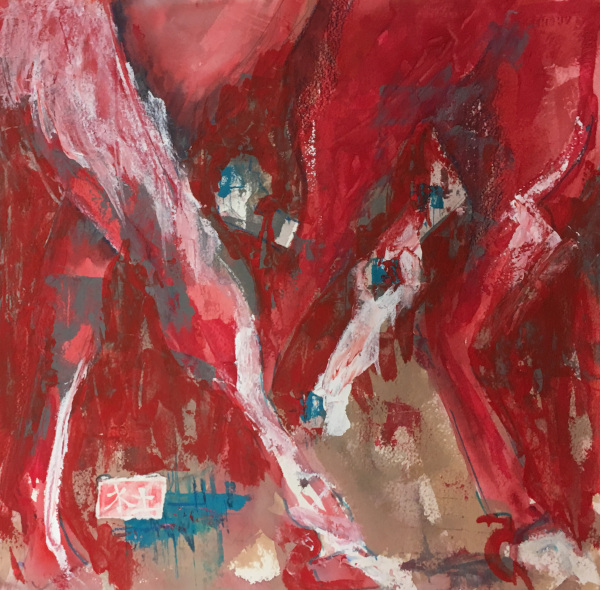 In the afternoon, Mr. Lawrence gave a lecture on contrast using some of the following artists as reference.

Ending with this enjoyable quote by Michael Lewis:

“At some point during John Richardson’s superb biography of Picasso you begin to feel grateful to Art, not for the pleasure it affords the consumer, but for the outlet it offers the psychopath.”

At some point during the day, I also finished this, though I can’t remember where it came from. 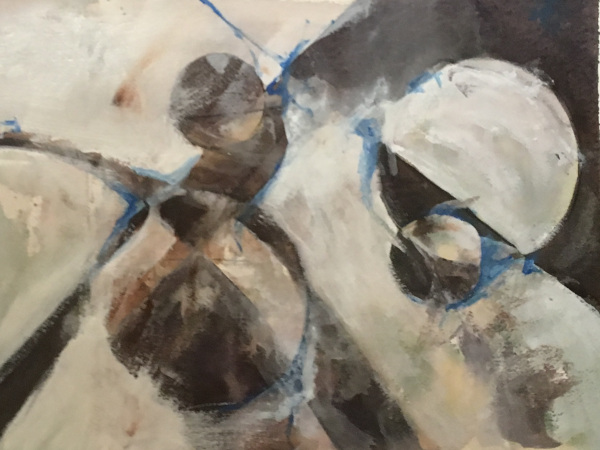 Day 3 started with a critique where Mr. Lawrence told us, he would not be playing “painting doctor” but challenging us to talk about the bigger concept of your work. The idea of unification (dominance) again came up. He pressed us to think about having a unified painting with variety as the thing that makes it interesting.

I showed this yellow series from day 2. He liked the little parts better than the big part, telling mere there too much purple in it. He showed a crop (far right above) so I could see what he meant.

One intriguing idea for the day was the idea that painters either paint environments (think of Jackson Pollack) or objects. I am clearly in the later category, but I did wonder what it would take for me to move to the former.

This was also the day I had my individual meeting with Mr. Lawrence. From day 1, he had been spending 15-30 minutes (occasionally longer) with each workshop participant to talk about their goals for their painting and what they need to work on. My unique issues were a lack of dominance coupled with negative shapes been repetitive and undefined, though my “object” was always lovely.

At the end of the day, I was starting to feel a little punch drunk and in something of an existential crisis. WHY was I painting? WHAT did I want to say?

So I did this painting. 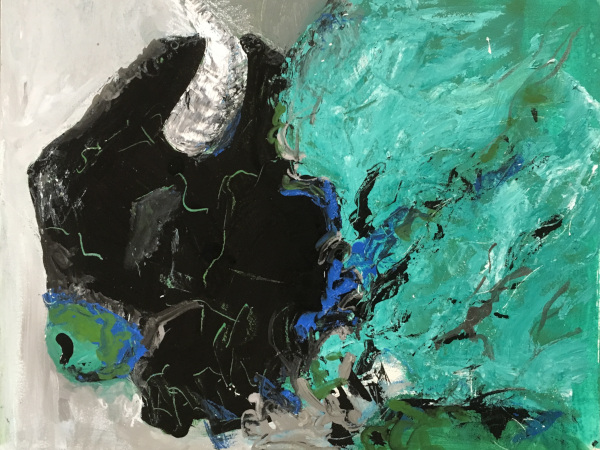 Wednesdays in a three day workshop are notorious for tears, hysterics, and a variety of other crisis. But I foolishly thought that since I had got past that big day, I could just plow on. Ha.

Mr. Lawrence announced in the beginning of class that today was SHAPE DAY and lectured on great shape makers.

Great shapes should have two DIFFERENT dimensions: longer than wide, taller than wide. Great shapes have interlocking edges with ACTIVE and PASSIVE edges. LOOK AT EDGES, he implored. Vary edges for visual interest. A hard edge will stop the eye, while a soft edge will transport the viewer.

This day I had decided to move away from horse legs because I felt like I wasn’t getting the results I was looking for. I decided to cut out some swan shapes and place them to create four different compositions. I arbitrarily decided color scheme, dominance, contrast, and an idea to each. While I did write these down on the edges of the tape, when I ripped the tape off, much of my memory went with them.

Most of the class had had their individual consultations by this time and Mr. Lawrence was alternately going around the room and answering participant requests to take a look at something. So, I asked him to take a look at these, because I was in the familiar stuck spot that we had discussed at our consultation the day before. He took one look at them and said, “I love the other three but I had that pink one.” That had been my favorite. “Those black things just stick out like a bug.”

Do you ever feel the little rubber band that holds you together just snap? Mine did. Because he was absolutely correct. We discussed a few other ideas, then I went outside and just sat around breathing for the next hour. I was DONE painting. Meltdown had occurred.

It was probably fortunate that Kathy had driven this day, because I was not able to pick up my toys and go home. I eventually came back where Mr. Lawrence gave a delightful little lecture on how to do simple and compelling figures and faces. While I was done painting, I was willing to apply paint to paper, so I whipped out some scraps and went to work.

I suspect I was not the only one teetering on the edge of a breakdown, because Mr. Lawrence continued in the morning with more figure demonstrations in addition to a short lecture.

I worked on these simple faces (6 brush marks to get started…) during this period.

A final critique would be held in the afternoon where we would present one painting that you are working on today and one that you liked. We would also announce what we would work on at home.

As I mentioned, I had stopped painting, though I was willing to apply paint. So, I worked on covering this piece of paper, which turned out to be so drippy that I couldn’t do anything except that first layer.

Then I worked on some more figures, adding paint to change the mood per Mr. Lawrence’s demo.

One of these inspired me enough that I decided to try for a final painting (though, remember, I was DONE painting.)

It was this final painting and the gray legs painting from day 2 that I put up for the final review. As far as what I would be working on when I got home: drinking. You can see the link to the critique here: https://youtu.be/AyyfbHpihGU (Please note: At this point the group had had five pretty intense days together. I was not offended by anything that was said.)

This was an intense week. And frankly, well, I missed Mom. She would have listened to all stresses and breakthroughs of all the days. Without her, I felt a little bereft.

I walked away with less of a direction for my painting than I had originally hoped. But the thing is… I’m really the only person who can decide what I want to paint.

I did come away with these thoughts.

Over the last couple days, as I have puttered around the house, enjoying my last days of vacation, a few more thoughts have drifted in; however, I think I will save them for another post. I want to go watch Game of Thrones now…