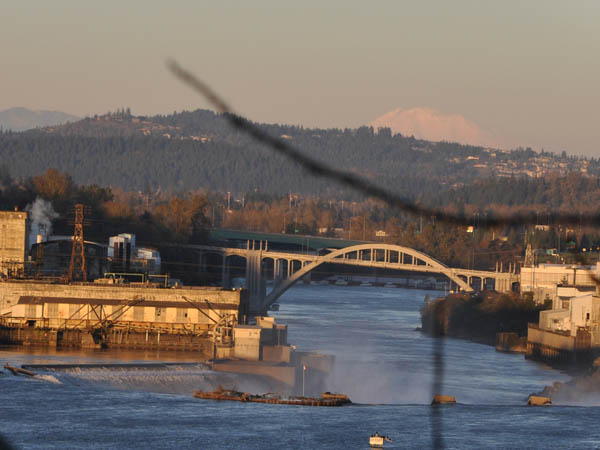 Dad’s memorial was yesterday, and after that… well, frankly I just felt like going into hibernation. While I loved all the support and was touched that so many showed up to remember Dad and support Mom and I, I was absolutely wiped out.

After the food was consumed and Mom left for the beach, I took Finn out for a hike to Canemah. I haven’t been out since the big storm hit the area, and several trees were down. The first tree was at the entrance of the park; it was an unhealthy tree that I’m surprised lasted this long. Other than it blocking the path, it wasn’t a big deal.

However, a little further down a big oak tree had been toppled by it’s roots. I wasn’t able to get a good picture of the root system, but what I found fascinating was that this large tree had grown over a bunch of boulders. It wasn’t able to develop a deep root system, so when the latest storm came along, the roots were unable to keep it up.

In addition to storms, it has been very cold this last week. There was still frost in shaded areas at various spots along the path. 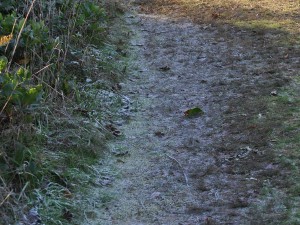 Cedar waxwings are still in the area and were busy harvesting the last of the madrona leaves.

Weeds are starting to take on the artist crispiness that I like in the winter. Birds are out again. And even common paths feel a little magical with the fall carpet of leaves. As I was leaving, I looked to the north and admired the falls, Mt. St. Helens, and the paper mill.

I saw that Willamette Falls was putting up a good spray and decided to swing down and take some pictures.

Hundreds of cormorants were lined up next to the falls.

I’ll have to go back and see if I can get some more shots of the cormorants. Another painting?