Last Friday (Dec. 20), I took off on an epic trip to Monterey, California, and back. 1500+ miles of driving in 8 days. The main goal was to a) avoid the holidays, and b) see birds. I managed to do a spectacular job at both. 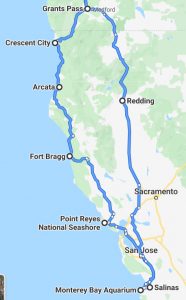 This day the goal was to cover miles. According to Google Maps, it was a 7 hour drive to Redding. When planning the trip, I did not know if the Siskiyou Pass would be in good condition, but things looked good on Trip Check, so I took off. As a companion I had my beloved dog, Key, and the book “Freeway Birding” by Harry G. Fuller. Thanks to this book, I was able to spot two new birds at the Collier rest stop just inside California.

It was more than I was expecting on the first day!

According to the map, the next leg of the drive was 4.5 hours (liar) so I thought I would take some time at the Sacramento National Wildlife Refuge in the morning. Though the day ended up being absurdly long and the worst part of the driving happened in the dark, it was still a great stop.

I started with the northern Red Bluff site, where I saw a great variety.

But the central unit really took my breath away.

The snowy egret got me really excited!

I had rushed down south to make an 8-hour whale watching trip through Monterey Bay Whale Watch. Unfortunately, a few days before I left, they cancelled that, but booked me on the morning tour. But when I arrived, it was windy and raining and they weren’t going out. I booked for the next day, hoped for the best, and went down the street to the famous Monterey Bay Aquarium.

I had high hopes for the aquarium, and they were met. It was a Sunday, so it was crowded, and frankly so many children was a little oppressive after a while. Also, many of the exhibits were exclusively (or so they thought…) for children. Nothing stops me, and I had a great time, with the highlight being petting the bat rays who would come up and cuddle (not kidding) on the side begging for food and accepting a scratch.

Birding in the area was good as well, and I added a few animals to my list. I have chosen not to include the animals in the aquarium, but, as I said, I enjoyed them.

I had high hopes for seeing a grand variety of sea life on this section, but I cautioned myself that everything depended on the animals.

A young, male otter was hanging out in the harbor when I arrived. Number 205 according to his tag. He was completely charming.

The harbor exit was full of fun as well.

The day started out well, with us finding a large pod of Risso’s Dolphins right off the bat.

But the money shot, was…

I got a lot of photos, but my camera decided it was out of battery life about halfway through the encounter, so I was reduced to my cell phone. I got some fun videos.

Here’s what MBWW had to say about the encounter (from their Facebook page):

We spent the day today with the CA51A’s, 49C, and 50B – it was an incredible experience! This morning and afternoon the Orcas were extremely playful and displayed some amazing behaviors–they were breaching, tail-throwing, rolling, and kelping! We suspect they were teaching their 3 month old calf about hunting, as they killed a bird in addition to whatever else they were hunting this morning. After we put our boat in neutral two of the Orcas swam directly towards us, both belly-side up, and went underneath the boat (video posted earlier today). We also saw a Gray Whale as we were heading back out to the Orcas this afternoon, which made the day that much more special!

And that was the end. While the orcas were AWESOME, I as a little disappointed not to see more. The next day, they reported:

One of my concerns about this trip was that I did not have a good sense of distance. This day I left my friends in Salinas (thanks, Devon!) and started the return trip along the coast. I elected to travel through San Francisco, which wasn’t as bad as I was afraid of; I got to go over the Golden Gate Bridge!

Once through San Francisco, I stopped at a couple of parks.

Including this mystery bird; anyone want to volunteer an ID? 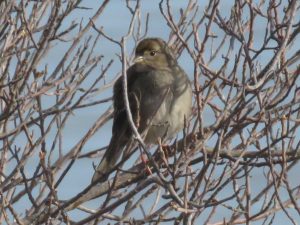 I headed south east after that because I wanted to see Point Reyes Park. This turned out to be quite a bit more driving than I expected, though it was lovely.

Unfortunately, what I didn’t realize was that after Point Reyes, I had a couple more hours of windy road driving to get to my hotel in Fort Bragg. In the dark, this was no fun.

Wet set out bright an early and within a few minutes had seen a lot of spectacular shoreline.

And the birds were nice, too.

But when we finally got up to Humboldt Bay, my mind was blown.

I spent over four hours just on the south spit. The variety was intense.

At dark, we moved along to the hotel and called it a day.

Humboldt Bay & Arcata/Eureka were one of the places I most looked forward to visiting. I had originally toyed with the idea of spending the whole vacation here. And I totally could have. Having explored (as much as time allowed) the south bay the day before, I concentrated on the north bay. 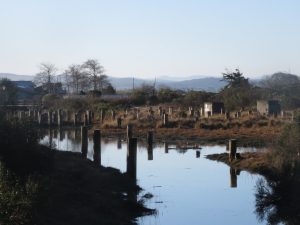 Key and I took a long walk (dogs were allowed, on leash) around the Arcata Marsh Interpretive Center. It was amazing. LOTS of wildlife as well as well-groomed trails, parking, and an interpretive center. If you are ever in the area, spend some time there!

When we finished here, about 10am (started at 7am), we did some driving around the area. The best bit was a rather unassuming park where we saw one of my favorite things in the world! 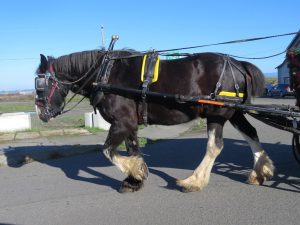 And some nice birds, too.

This is the part where I admit that, well, home is the best place. We drove from Arcata up to Crescent City, but the drive was shorter than expected and we hit town about 1pm. I seriously though about cancelling my hotel reservation and just heading home. It would be a long day, but the part in the dark would be I-5. This is what stopped me.

Now, if you were paying attention, you will note that I saw these the day before. But I didn’t recognize them. This time I did, and so I stuck around, enjoying the show.

We got up early and hit the road. 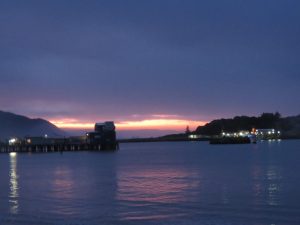 We stopped for a walk on the beach, enjoying some last sightings.

But the lure of home kept me focused. I drove through the last point on my itinerary, the Jedediah Smith Redwoods State Park, but didn’t explore much. We made it home around 1 and then my stressed out dog and me collapsed in our chair.