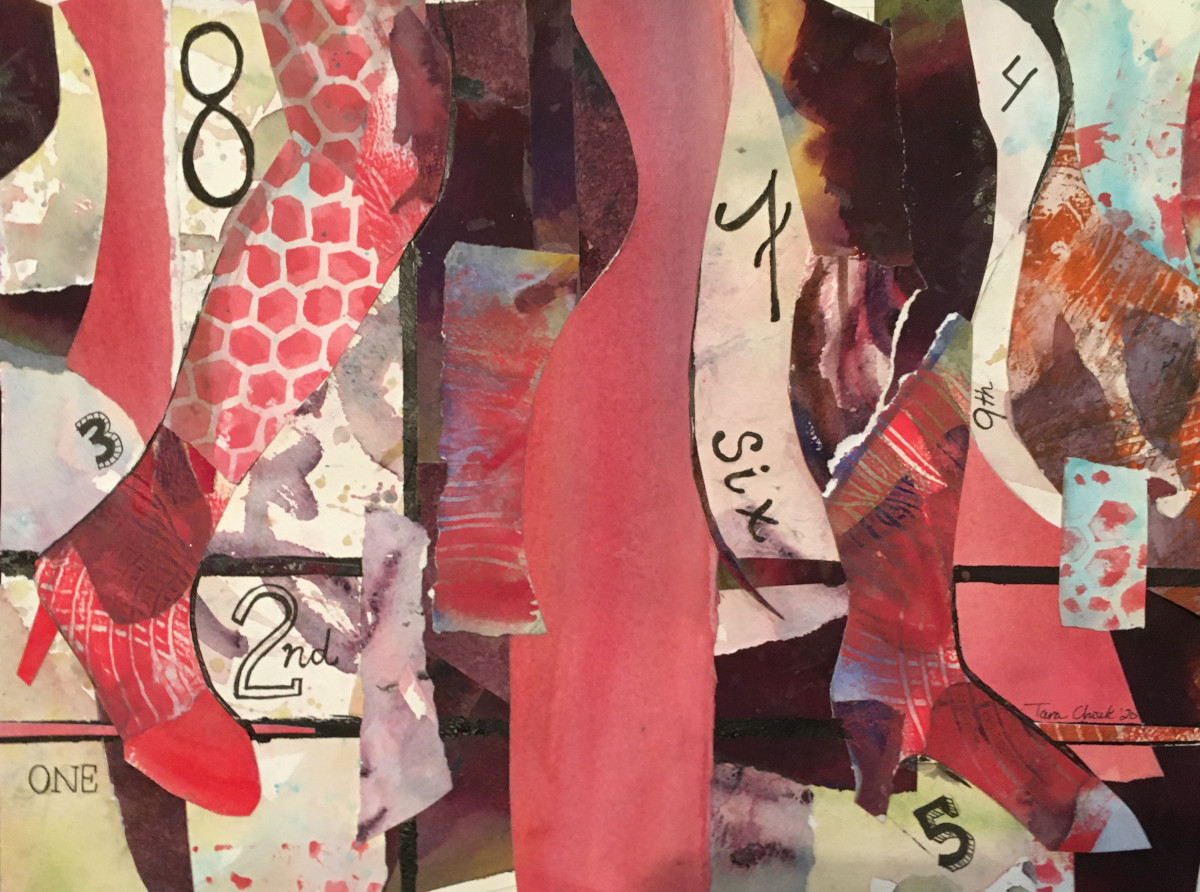 Thank you to Ruth Armitage who used this as a blog post title. I’ve had it written down ever since!

meraki [may-rah-kee] Meraki is a Greek word that describes doing something with love, creativity and pure soul. It means leaving a little piece of yourself in your creative work, whatever your work may be.

A few weeks ago, I posted an almost finished painting on Facebook and asked for title suggestions. I got more than 60 comments and a bunch of good names. But in the end, I selected “I Feel Pretty”. Here is the final (probably) version. (Note: I need to retake this photo because it looks blown-out to me.)

I thought the jewelry would be enough, but when someone suggested a pink feather boa… well, she just had to have it.

Believe it or not, while my solo show at the Salem Art Association is looming large, it isn’t my next event. The Salem Reads reception is February 5 and this weekend I took my painting down to get framed.

Keen observers may notice that I added the numbers to the painting since I last posted it. I think it really gave it the finishing touch. I hope you’ll consider reading the book, attending some events, and especially showing up at the reception!

Saturday I did a variety of errands before settling down to my (what feels like) real job. One of those errands was swinging by the Salem Art Association to attend a sale and to take a look at the gallery space where my show will be (reception March 6).

I went in and gulped. I remembered the space being a tiny little room. In a strict sense, that is still what it was, but suddenly it looked HUGE! The Gallery Director I have been working with, a nice man named David Wilson, was there and we chatted about the space. He offered for the second (or third…) time to come to my house to help me pick out pieces for the show.

Now, I should mention some back story here. This week David and I have been going back and forth about my artists statement and pieces for the promo. Toward the end of the week, he asked me if I had any landscape work to add to the show; I think he was cottoning on to the fact that what I was proposing was not enough. After seeing the space, I’m getting that.

I’m going to take him up on his offer and we’ll see what this show looks like after that meeting. In the meantime, I’m still working hard on my Minto Brown series. Some of the paintings may look the same as last week, but all of them have changed.

If you haven’t already, mark your calendars for March 6. I have a feeling I’ll need all the moral support I can get!