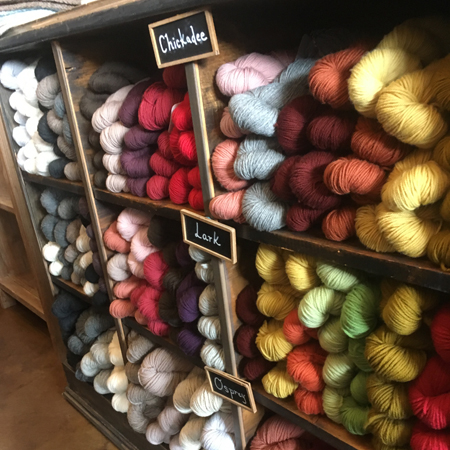 A couple of months ago I decided I need a vacation from attending the Watercolor Society of Oregon conventions (twice a year in April and October.) After putting one on, I was tired. I didn’t get a painting into this show, and I knew it would be extra big and fancy because it was combined with the Western Federation show. I figured I wouldn’t be missed, so I signed up for my friend JJ’s Sheepish in Seattle 2017: The Shee-peat from The Traveling Ewe. 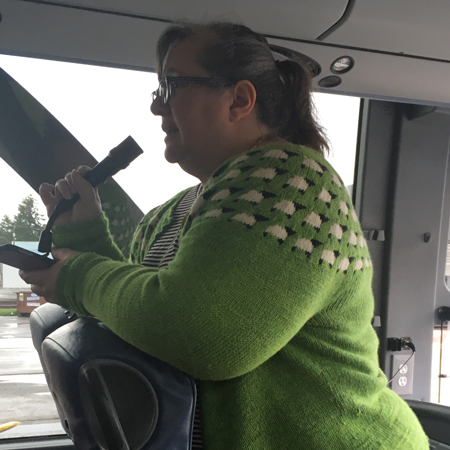 We go on the bus Saturday morning, and I’ll tell you, I all but melted into that seat. It was so relaxing… a little knitting, a little reading, a little nap. All with occasional interruptions to go into fabulous stores and shop for yarn!

Our first stop was in Chehalis, Washington at a charming little store and bistro called Ewe and I. 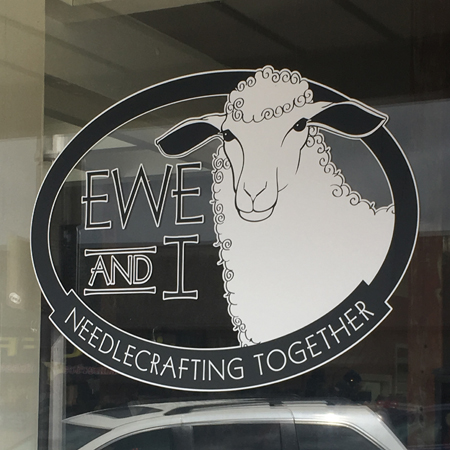 While I managed to resist purchasing the entire store, the lunch was nothing short of gourmet with the best cheesecake I’ve ever had. Apparently, the secret is the sheep of one of the owners of the shop; those sheep give milk and wool!

Next we took a westerly route through some lovely beach country to the island of Bainbridge and Churchmouse Yarns and Teas. 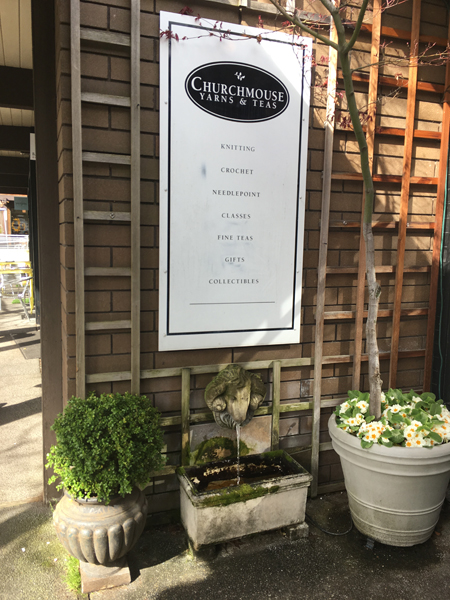 This shop has nothing short of a cult following, and after seeing their lovely shop, I can see why.

While I managed to resist going into more debt over this store’s offerings, I did enjoy a nearby bakery and ice cream shop.

From there, we boarded the ferry to get over to Seattle.

I am sure you won’t faint in shock when I tell you that I fell down on my photography duties at Bad Woman Yarns because I was distracted by cupcakes.

But I finally broke out my wallet to purchase a charming little cheese slicer… though admittedly from a nearby shop.

In the Glow of the Needle

We were on our own for dinner, and in spite of my attempts to go out with some other knitters, hunger and loud noises eventually separated us and I ended up dinning in a little Thai restaurant on Tilikum Place.

A statue of Chief Seattle stands above a fountain in this tiny plaza whose name means “welcome.” – Google

After that, I headed back to my hotel room at the Best Western Executive Inn and watched darkness overtake the Space Needle. 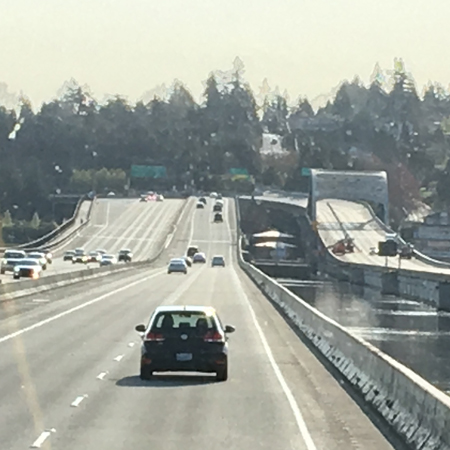 Sunday morning founds us back on the bus to hit Serial Knitters Yarn Shop (who graciously opened early for us). Unfortunately, this sign just did not lend itself well to artistic photography, which completely belies the charm of this store, the first to capture some yarn money. 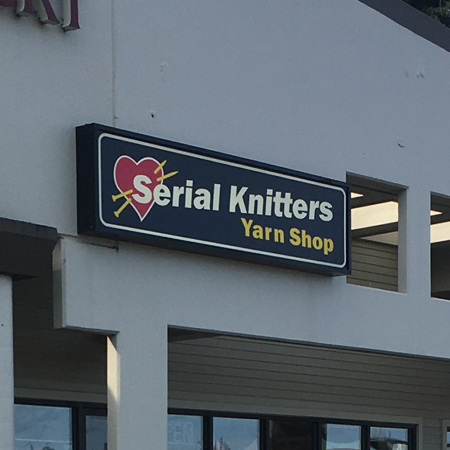 It was also across from a Starbucks, a benefit not to be underrated. 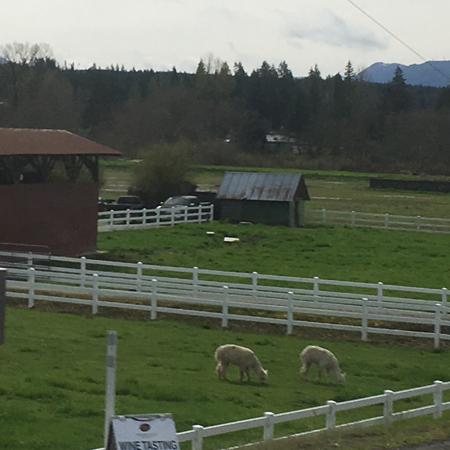 From there we headed to charming Carnation, Washington, and the lovely shop, Tolt.

This shop is another with a following, and it was hard to deny the charm of this rustic country meets industrial shop.

They carried  Quince and Company yarns, which names each “line” after birds. It would have been all too easy to go down some very expensive holes in this area. I was brave and stalwart with only one TINY slip (I really did NEED that basket…)

Last, but far from least, was the Skacel bastion of Maker’s Mercantile. 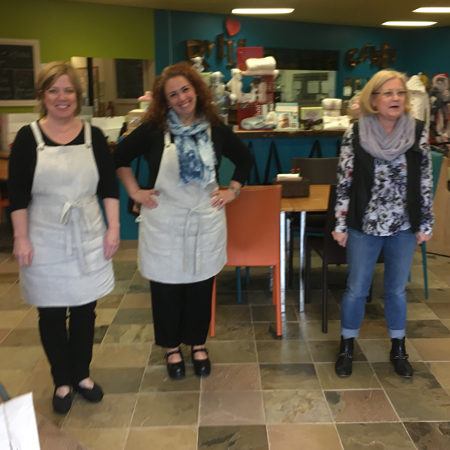 Here we had lunch, admired the decor, and I’m sure I’m not the only one to admin that my budget for the weekend was finally broken.

The worker’s little jig as we left I think adequately demonstrates the joy a bus of 43 knitters brought to their hearts.

Over the course of the weekend, I saw all three of the big mountains…

And was recharged and inspired.

A pretty good result for any weekend. 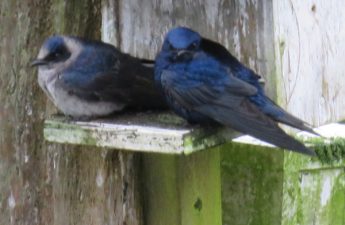 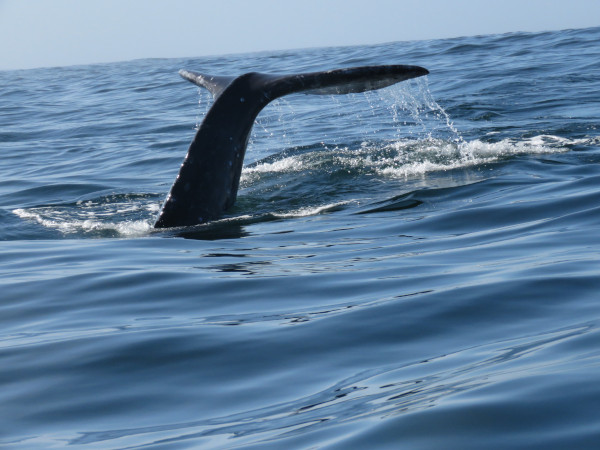 The camera got a workout