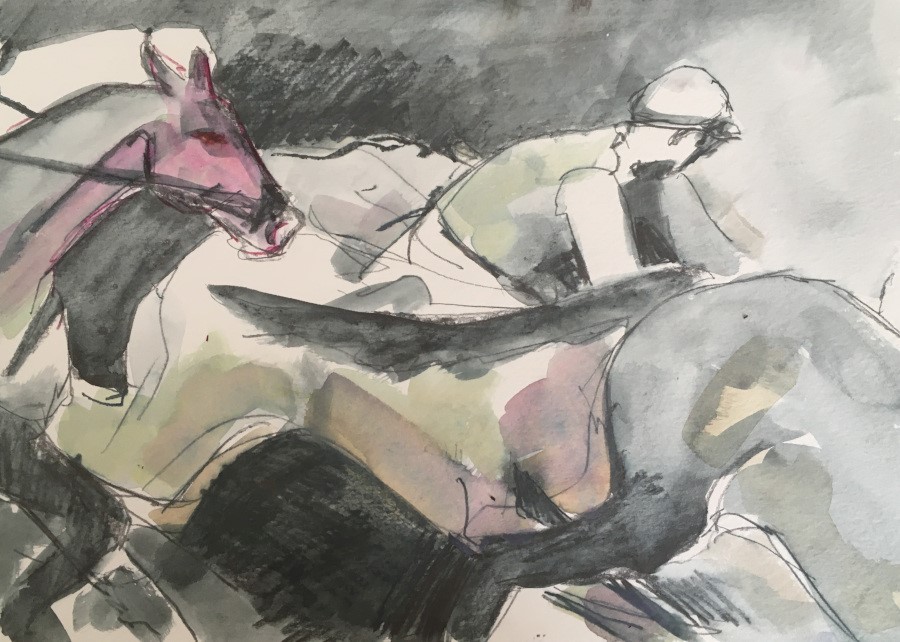 When starting Ruth Armitage‘s Roaring 20’s mentorship program, I filled out a little questionnaire about my goals. One of the questions was about how much painting I did and if that was enough or if I wanted to do more. I answered that I painted from 1-4 hours a week, and that felt like enough. This weekend was a “1-hour”.

It was a long week. It started with a carefully crafted email explaining to a co-worker that I was not perfect, progressed to a 6-hour all-staff Zoom call, and was capped off with two (minor) doctor things.

I was so tired, I  thought about heading down to the beach house and just sleeping, but I had a few errands to run and some chores to do, so I stayed here in town. I’m not sure what happened to Saturday, but today has been a couple of dog walks, a nice long nap, and a very small amount of painting.

I’m not sure why things seem so hard right now, and I’ve been fretting about it. Yes, there is a global pandemic (haven’t your heard?) And, yes, at work we are being deluged with budget cuts, co-workers leaving, and the resulting chaos. But, I am all moved. I like it here. Both me and the dog are okay. I feel like I should be handling things better.

On my dry erase calendar, I have a copy of this illustration. 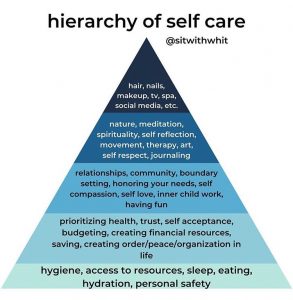 I was examining it this morning and it feels like the items at the base (personal safety and health specifically) are just not there. I read an article about how all the new decisions around COVID-19 are taking a toll on our mental state. It’s a factor; I’ve started avoiding Facebook because I’m just so tired of the ugliness of people. Watching people I care about repost hurtful inaccuracies, traumatic video clips of protests, and dramatic health stories feels like more than I can take.

All of this is to justify (to myself) why, in 48-hours, I only sat down at my easel once.

Friday was the 2nd cohort meeting of the Roaring 20’s mentorship. The four of us submitted images and Ruth went through them with us and suggested enhancements and next goals.

I submitted my painting, “Transition” for the critique.

Ruth loaded the image into Procreate and showed me that adding pink to “lead the eye” around the painting would enhance the painting just enough to call it done.

I took most of her suggestions, signed it, and sent it off to the NWWS show. Fingers crossed it gets in (I also sent “I Feel Pretty”.)

My goals for the month are:

Sunday afternoon I finally sat down at the easel. I decided to work on finishing this painting. 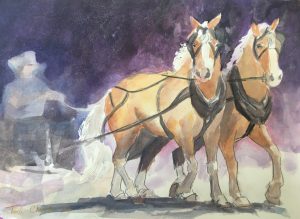 I’m toying with the idea of calling it “Girl Power” instead of “Feed Bag Racers”. It’s not done yet, so I have a little more time.

Then I worked on some starting some ideas around my next project.

In March of 2008 I took the trip of a lifetime to England. There, I toured London, then went to the Crufts Dog Show. I meandered south to Cheltenham for the Festival and the Gold Cup before returning to London and coming home.

Thank goodness digital cameras were common, because I came home with thousands of photos.

The first two races of my first day were steeplechases (I found out that steeplechases are not a description of any race where horses go over jumps; jumpers start with a “bumper”, graduate to a “hurdle”, and from there go to the full-fledged “chase”.) The size of the jumps was magnificent. The distance and spread of the race was awe inspiring. And when all the runners went over that first jump as a pack, my breath caught. Ever since then I have wanted to paint from those photos. And now, it’s time.

Like last month, my goal is to do several versions and/or sketches before doing a larger piece. I’m not ashamed to admit that sitting down with the photos and trying to begin was hard. Have you ever wanted to do something SO BADLY but at the same time worried about screwing it up?

And then I made the first marks, concentrating only on the shapes. 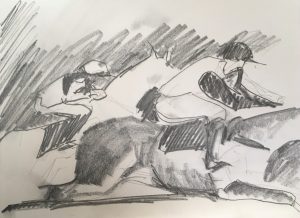 I took out a new toy, water-soluble graphite pencils. Fun! 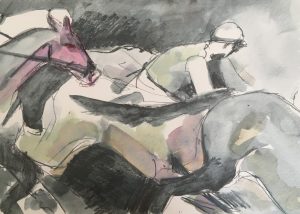 I added some watercolor and gouache (notice the pink head, that was my nod to the week’s goal of having a clear focus of the painting; I like how it turned out!)

But, as I said, I’m tired, so I stopped there. In my graphics program, I combined the two images, seeking something bigger but also a shape to fit the paper.

If I added one more “down” layer I think it would work (I added the horse head between the images in my graphics program. It leaves something to be desired.)

I have a lot to think about for next week’s painting session!