A friend pointed out this week that I had not posted for more than a month.  I’m working on apologizing less, so I would like to say thank you for any remaining readers I may have. I can’t promise to be any better in the next few weeks, but please know that I have started many posts in my head and have rejected them for a variety of reasons, most of the revolving around the dark nature of my thoughts or the old adage “write it and regret it.”

March 9-10 I went down to the beach again and spent more time working on Mom’s house. In some ways, it’s nice to go down, but in other ways, I end up very tired and worn out. It’s not really like a vacation… it’s just more work.

The next weekend, March 15-17 (one of my three-days) I stayed here and did exciting things like taxes and housework. Then on Sunday Key went to a nose work trial and got his Interior 2 title. That was the end of a little rush of nose work trials and now we have to wait a while before more come along.

At this point, I was feeling pretty good. I could see some progress on Mom’s house and I was feeling a little more cheerful. Then I let the medical professionals in.

My knee has been bothering me and I have been having some more breathing problems. So, it’s been a while since I had seen the doctors, so I decided to go in and see what could be done. It was one of the worst appointments I have ever had. The details are just too much for me to recount, but I was given another medication and a very serious lecture.

Then a few days later I came down with a cold which I have been unable to shake since (I feel sure I picked up the cold in the doctor’s office). So the weekend of March 23-24 I stayed at home and was sick.

The following weekend (obviously, you know I’m going to work on all the in between days, right?) was a big weekend, the first of four consecutive intense weekends that may end up being the end of what I can take.

I met with professional genealogist and friend, Roxanne Cummings-Basey, to tackle the mountain of photos and genealogy materials left to my mom from my aunt Carol. (See my post about the first time I went back to the beach house after Mom died.)

Aunt Carol was an avid amateur genealogist in the 80’s and 90’s when records were still mailed to family and friends and EVERYTHING was done a word processor (not a computer). Over the years, Aunt Carol and Uncle Jack took quite a few genealogy related trips and self published many tomes of family stories and records. They distributed these to EVERYONE. And over the years many have filtered down to me, as first my grandparents, then my aunt, then my mom died.

The agony of having all this is that I have all but no interest in it, but I was concerned that there was information that was “important.” That’s when Roxanne stepped in. While I sorted the boxes for pictures, she went through the paperwork, sorting through what was basic information versus actual ancestry information. 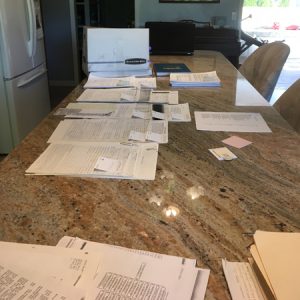 In the end, we went from 10 bankers boxes to 1 bankers box of ancestral information. Even that information, Roxanne felt, while possibly personally priceless, was not terribly “valuable” as so much of it was not cited and sourced. It is probably readily available on the internet.

The piles of duplicates and discards were awesome, and of course had to be hauled home where I have recycling service.  In a lot of ways, it was a fun weekend. While Roxanne and I worked a lot, we also watched TV and talk, went out dinner, looked at the ocean, and knitted a little. However, by Sunday I was ready to be finished, not the least because Aunt Carol was a smoker and all the smoky paperwork was making me feel terrible.

Once back home, I scanned the information in the one remaining bankers box and I have put it on CDs which I will give to my cousins and Roxanne (she may do something with some of the information having to do with her professional development, but I don’t really understand.) However, I am confident that everything is as preserved as it’s going to get and that responsibility is off my shoulders.

Finally, this weekend was the Watercolor Society of Oregon spring convention where I was pleased that this painting was accepted. I plan to write another post about that tomorrow. (We’ll see if I do…)

I also found out this week that my painting, “Page 1” was accepted into the Emerald Art Center Exhibition later this month. That’s always very pleasant.

Next weekend is Mom’s memorial and to say I’m wound up is an understatement. The following weekend is the garage sale at Mom’s house (part of the Great Oregon Coast Garage Sale). I wish I could learn not to turn my life into some kind of extreme endurance sport.