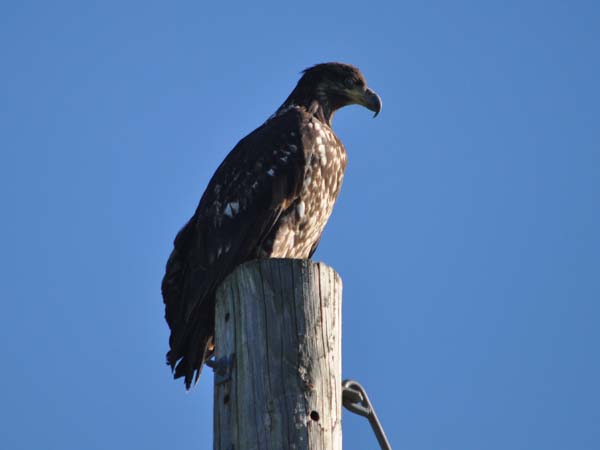 Happy Thanksgiving to all I have not wished these sentiments to in person. I hope your holiday was as enjoyable as mine.

I went to visit my mom, and though I didn’t stay for as long as I originally planned, I had a very good time. Unfortunately, bad planning caught up with me and I had to return home the same day (instead of an overnight trip) because I had overlooked that my elderly cat can no longer eat dry food and I was reluctant to leave him without food for 48 hours. And I wasn’t smart enough to line up a cat sitter…

In spite of the fast turnaround, I enjoyed my visit with my mom and even got in some bird watching. My mom has cornered the market on pine siskins at her feeder.

Friday morning I got up and decided to explore another portion of the Willamette Valley Birding Trail. This time I decided to do the “Santiam Loop.” I am very excited to report I saw a pair of horned larks (a first for me), though my only photos are of this juvenile bald eagle (look at that beak) and an ordinary red tail hawk. 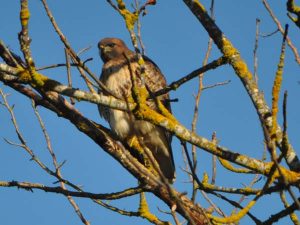 Saturday I got up and did the same thing, though I had a slightly  more defined goal of hitting the E.E. Wilson Wildlife area and the Philomath “Poo Ponds.” E.E. Wilson was nice, but I probably won’t be in a hurry to go back. We visited the Jackson-Frazier Wetland, which was absolutely gorgeous, as well as parts of Finley, but never did find the famous triple P.

Again, my photography skills were sadly lacking. I only dragged out the camera for this handsome egret.

All things considered, I am glad I was around this weekend. I had fun birding, but life at home was filled with a variety of near disasters (most of which were confined to Friday.)

As I said, Friday morning I got up and decided to go birding. I loaded up, including the dog who enjoys any kind of adventure, turned on the car and… my tires were low. Now, I had done some birding on my way to visit my mom at the beach and at one stop I had heard one of my tires fizz, so I checked to make sure no tires were flat and headed to Les Schwab. Les Schwab checked the pressure, added a little air, and assured me all was well. But by Sunday, the light was back on, so that story may be ongoing.

The second miss of the day was when I stopped on the Foster Dam to admire a merlin (dang hard bird to spot, actually the first one I’ve ever been able to positively ID.)  I got back in my car and continued on my way, but when I decided to close my checklist, my phone was NOT IN THE CAR! I ran back to the dam, and there it was in the middle of the road. (On that particular near miss, I also feel lucky I didn’t have a heart attack.)

By now I’m getting low on gas, but I (foolishly) decided to hit one more spot before I worried about that. Mistake. A couple hours later I was on fumes, but I did make it to the gas station.

The final incident of the day came upon my return home. I noticed that my bike helmet was sitting on my steps. Odd, I thought. How did it get there…? 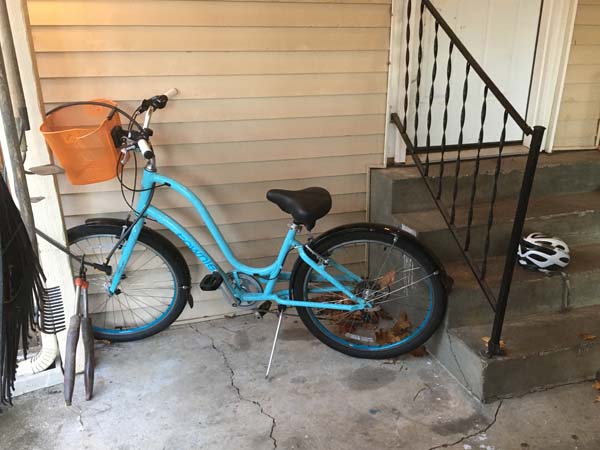 Then I noticed my garden shears were clamped around my bike lock. 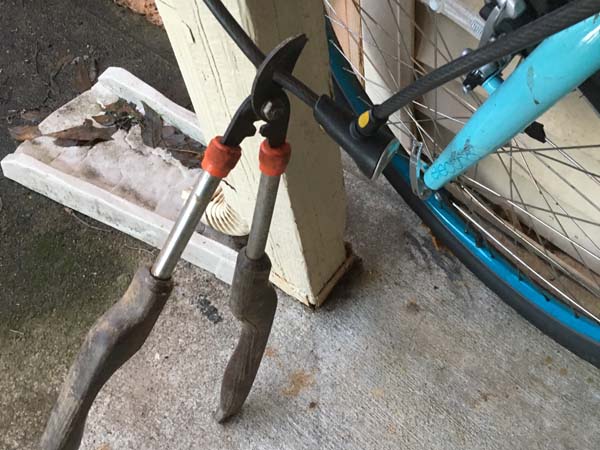 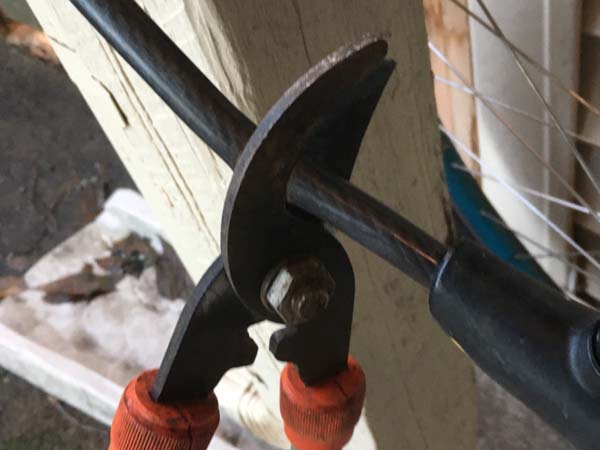 That pair of garden shears is probably not any good any  more.

Of course, I called the police, but they are overworked and nothing happened. It was the catalyst for me getting the “real” bike locks I have been procrastinating about getting. I still claim that even with bad locks, people shouldn’t steal.

In other news, my November NaNoWriMo project is at 45,091 words (goal 50,000.) The problem is that I’m “done” telling the story, so I’m having to back and add some stuff to get the word count up. It’s more editing than I really intended to do at this stage, but I’m SO close to “winning.” Just four more days to go and then maybe I’ll have some actual art to show off.

I did take some of my “stealth” paintings to critique group. Critique group agrees they are all but done, so hopefully more interesting things will be coming soon.

I will end this report with a picture of an upset Bob cat and his return to happiness. Bob is very old and has kidney failure. He barfed on his bed, and expressed his unhappiness at having it washed. But it all turned out okay. I guess even cats have near-misses.