Monday I went on a guided hike of Canemah with Metro naturalist Ashley.

It’s amazing how much difference training can make! Ashley demonstrated some significant geographic features of the area. She answered myriad questions about plants, and showed me birds that I didn’t even know were in the area! 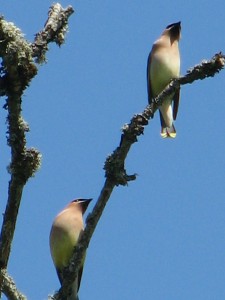 For example, I had no idea that Cedar Waxwings were in the area; I thought the gray/brown birds that I saw eating berries up the in trees were robins. Ashley knew they were Cedar Waxwings by their song! She was also able to identify black headed grossbeaks, marsh wrens, brown creepers, woodpeckers, Anna’s hummingbirds, robins, and towhees the same way!

Ashley also showed the group how to properly focus their binoculars (worth the $6 all by itself). She pointed out trees that I had seen, but I didn’t know they were interesting. I have walked by this Pacific Yew lots of times without knowing what it was or that it was such a big specimen. 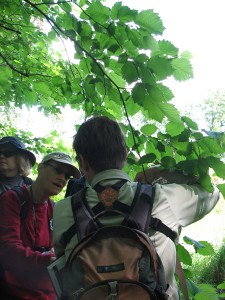 It was really exciting to walk this familiar terrain with someone so knowledgeable, but also with other people just as excited about nature. I will look for more of these Metro walks.

The most exciting part of the walk (at least for me) (and it was all pretty exciting) was that we (probably) saw a great horned owl! We were walking and we saw a large raptor in a heavily forested area. A few minutes later we saw it again. Neither Ashley or I was able to get a good enough view to positively identify it, but based on its size and coloring, and owl is the most likely visitor. At Ashley’s suggestion I will go back and set up camp to look for him again!