Around the state and back again

Some weeks are just too full, and this last week was one of them for me. As I said, I went on the lovely Seattle tour with the Traveling Ewe last weekend, came back for a day, then went back on the road to Eastern Oregon for work.

One of the parts of my job is to provide trainings around the state about the grant program I work for. I enjoy these trainings, but they can be exhausting. I am not a natural “public personality” and the work that goes into and out of these events really drains me.

We saw elk, pronghorn antelope, deer, and coyotes. On the bird front, we saw Osprey, Golden Eagles, and Sandhill Cranes.

The pictures are a little blown out (sorry) because I had my camera settings wrong.

I think that last photo just might be a painting…

The results of “Other Opinions are ‘Out There‘” are officially back.

Including the spring WSO show and the NWWS show, that’s 10%. Actually, that’s not too bad. We’ll see if I can keep the up for the rest of the year and maybe improve for next year!

Warning: This is about politics.

As I have said earlier this year, I am not supportive of the current President of the United States, a feeling that has only intensified as his administration has progressed. This particular month, I have committed to three marches: one regarding the failure of Mr. Trump to release his tax returns and allow us to watch for conflicts of interest; one regarding the attack on science, particularly around global warming; and one billed as the People’s Climate Movement.

The first of these marches was the Tax Day March this weekend up in Portland. I was not excited about it, but I felt like it was my civic duty to protest the lack of transparency the current President embraces.

Like the first march I attended, there was a lot of amusement to be had in the signs and costumes.

My sign was pretty boring, but I won’t do anything to make fun of the President and I don’t care about how much he does or does not make. I’m only interested in the potential for conflicts of interest.

This  march was slightly more sophisticated than my first protest, with chants and a marching band. Still, the basic concept is the same. 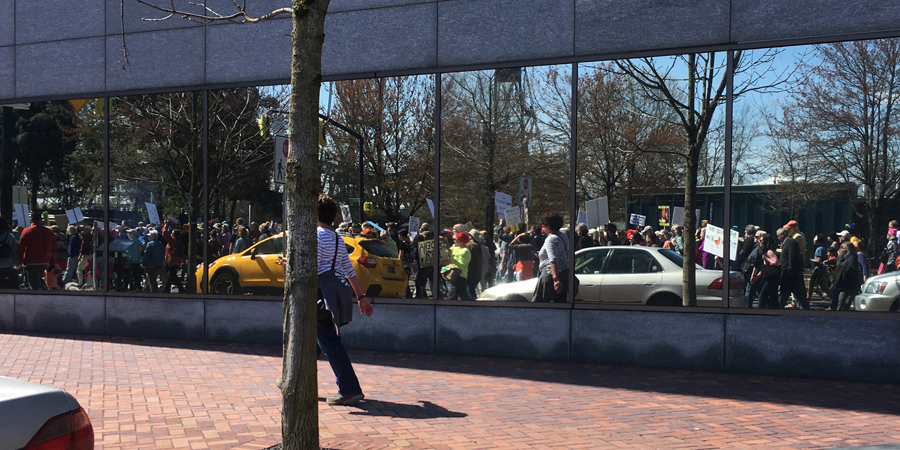 Apparently, Mr. Trump responded in his usual fashion, Tweeting (I don’t know the emoji for eye rolling) a reply that completely missed the point and was filled with the usual… whatever.

I just have no words for all this that comply with my goal of a PG site, so I’ll stop here.