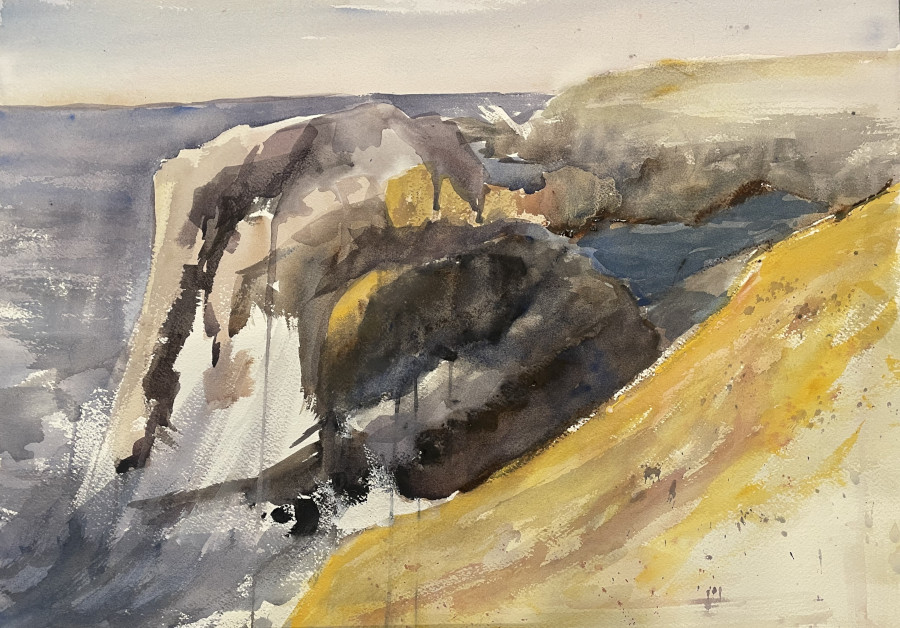 Art shows always seem to come at the same time. Feast or famine. It would be great to have one a month, but it’s more likely you’ll have five in one month and nothing for the next six. Right now, I’m entering the feast stage of the cycle.

Over the next few weeks, I have a variety of art-related opportunities. As usual, I’ve waited until the last minute to finalize things.

Chronologically, one deadline passed yesterday. I delivered my painting “No Dumping” to the Hoffman Center for the Arts in Manzanita as part of their Word & Image show. Saturday is the opening, and I’d love to go up again for the real thing, but I’m not sure time will allow.

A mere five days later is the Watercolor Society of Oregon convention. I’ll be teaching on Saturday (a first for me) and I need to get my presentation to 100% (it’s about 85% now). Three days of playing with friends, then I bounce into a four-day workshop with Linda Kemp.

During this workshop period, I also have to drop off paintings to the Westminster Festival of Fine Art. They’d like to have people volunteer at the show, but I’m not sure I’ll have the stamina!

Finally, my painting “Transitions” will be exhibited in the American Academy of Equine Art Juried Exhibition in Aitken, South Carolina. Other than arranging shipping, I won’t have to do much for that one, though I’m constantly tempted to just hop over for the opening.

And then… nothing. For quite a while.

With all of the above going on, brush buddy Sandra Pearce and I had made plans for her to come down to the beach house last weekend and paint up a storm. I had done a few paintings the weekend before, when the painting window first opened, but I hoped to do some more work while we painted together. Sandra arrived Friday morning and we hit Yaquina Head.

We went out to dinner at the new Pelican Brewery at Siletz (a little pricey, but food was good (other than desserts, which were weird)) then headed home to watch episodes of Landscape Painter of the Year.

The next morning, we got up early and hit Sally’s Bend-LNG before moving on to the South Jetty at Newport, then Brian Booth State Park (otherwise known as Ona Beach.)

Over the course of the weekend, Sandra managed to put together two lovely paintings, which are matted and framed and waiting for transport. Me? Well… I spread a lot of paint, that’s for sure. The problem, though, is one of location. The rules of this plein air event are that all painting must be done on sight with only “minor” changes being allowed back in the studio. That’s really hard. I need time to tiptoe up to the finish. The following are paintings done and “finished” at the site, with the black and white version being the same painting in black and white to get an idea of value.

Not bad. I think there needs to be a little dark connecting the pelicans and the dock.

Unfortunately, the mosquitoes were VICIOUS here and I ended up painting this mostly in the car! Unsure if value pattern balanced.

There are things I really like about these studies, but they were never intended to be submitted.

This one is an “almost”. I think the land needs to be pushed back to create a better focal point.

Again, there are some areas I really like in this painting. But i think the foreground is too dark. Or bright. Or something…. 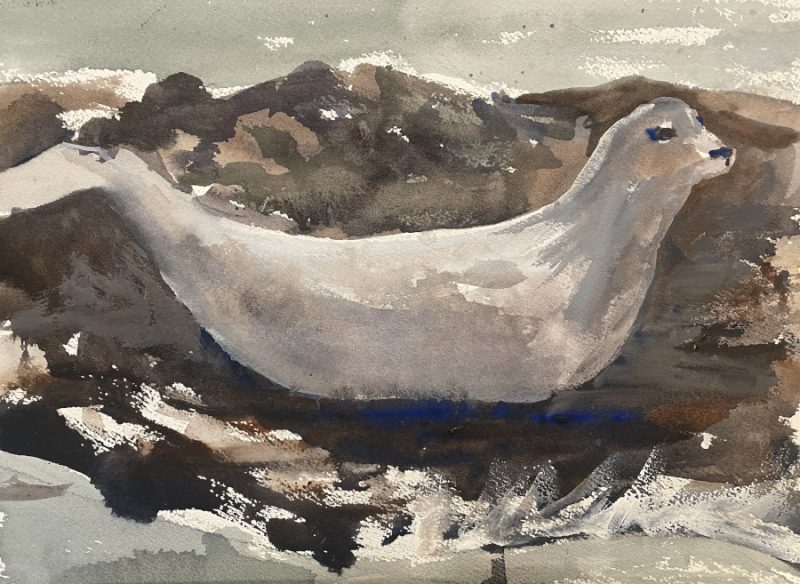 Fun, but not submittable.

Sandra really liked this one. I’m not sure a value study is… enough.

I think there are some good passages in this, but it needs an overhaul to be effective. The front left pushed back, the foggy rocks defined, the trees grounded, etc.

I must be honest. This was painted at Ona Beach while looking at areas that weren’t necessarily adjacent to each other. Artistic license, right? I feel the floodplain doesn’t read correctly and the foreground bushes need more authority.

I like this, but I see some areas I need to add paint and I’d like to make a couple areas just a smidge darker.

Conclusion – Tell me what you think!

So, keeping in mind the rules, which of these would be your choice to frame and send down to the show?

Right now, I’m leaning toward Sandra’s choice (Ona Sentries), Between the Wind, and Yaquina Rocks. Tell me what you think!