About American Mustang 3D
…to create a film that would highlight the issues facing wild horses and spur a national dialogue about how best to protect them. The end result is a film as entertaining as it is compelling, uniquely weaving dramatic documentary footage of horses in the wild with an engaging coming-of-awareness story about a young girl’s growing affection and concern for a newly rescued wild mustang. 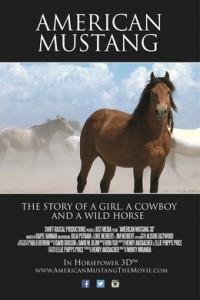 A week ago I went out with a group of fellow SEO volunteers to watch a special 3-D screening of the new documentary “American Mustang.”

I was very excited about this screening. First, I love horses and anything remotely horse-related: movies, books, art, photos. You name it, if you put a horse in or on it, you’ve increased my likelihood of purchase by at least 50%.

Second, the issue of the mustang in American is an interesting and controversial one. I was really looking forward to watching a documentary exploring the issue.

Third, the producers of the movie, have an association with Montgomery Creek Ranch (a private wild horse sanctuary in Northern California), the sanctuary where the SEO horse Nick went to live.

Finally, and not be underestimated, I was going to a horse movie screening with a bunch of horse-crazy friends!

Unfortunately, and I really hate to say this, I was disappointed by American Mustang.

On the pro side it had lovely footage and high production values; frankly, the horse footage alone was worth the ticket. I didn’t care for the 3-D (it made me a little dizzy) but it certainly was a lot of fun.

However, the cons pretty much made this movie a wash for me. The mustang controversy was discussed, but not in any in-depth, meaningful way. It was essentially told from the side of mustang activists with BLM and ranchers as the bad guys. While I am, essentially, in agreement with the mustang activist side of the argument, there is more to this issue than the romantic notion that “wild horses should run free.”

Here are several articles about the mustang roundups that touch on some of the issues; I couldn’t find any truly unbiased articles:

In my opinion, the producers missed a gem of a story in not focusing on the round up and fate of the White Mountain herd. That was the story I wanted to hear.

Instead, the producers spent a lot of time on the “engaging coming-of-awareness story about a young girl’s growing affection and concern for a newly rescued wild mustang” sub plot. I found it overly sweet, but also untrue. Teenagers gentle mustangs all the time! Why did the producers choose a story about a horse being “too wild” for this girl who loved him.

Finally, and perhaps the item that rankled the most, there was almost nothing about natural horse methods and how effective they can be, especially with mustangs. Instead, they showed a more old-fashioned, cowboy-style approach using ropes, a round pen, and a lot of running and bucking. If this image had been included with some explanations, or even worked into a “clash of cultures” story line, I would have more been more receptive. Instead, this method was essentially used to show how mustangs don’t make good riding partners. I believe the quote was, “Occasionally there is a nice one [sic. mustang], but usually they are a lot of work.”

This movie pretty much missed the mark for me; it tried to be a hybrid of documentary and tale and didn’t succeed very well at either. I think the producers let their passion for the free mustang cause over rule the need for a quality documentary on the subject.

My plan today (and the last few days) was to write this review; as if in response, on Facebook a list of the 50 Best Horse Movies appeared. I couldn’t let this pass without a comment (just in case after this review you were jonesing for a horse movie and were swayed from “American Mustang.”

Editor John Wilkinson put together his own horse movie review… “The horse serves as the vehicle to which family relationships are both strained and triumphantly healed, then we all share a good cry.” |Top 10 Horse Movies Ever Made

A few movies didn’t appear on this list that I need to mention:

Buck: BUCK, a richly textured and visually stunning film, follows Brannaman from his abusive childhood to his phenomenally successful approach to horses. A real-life “horse-whisperer”, he eschews the violence of his upbringing and teaches people to communicate with their horses through leadership and sensitivity, not punishment. 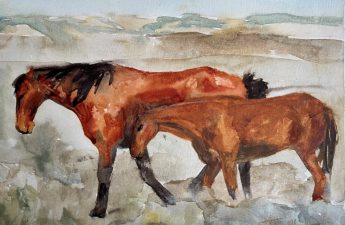