“Painting is easy when you don’t know how, but very difficult when you do.” ~Edgar Degas

“Painting was easy, until I learned how. I have been having such angst about my work. I guess that is a good thing, as it keep me engaged, and growing. But why does it have to be so mentally hard?” ~ Bev Jozwiak

I tend to think of Labor Day weekend as the “real” start of the year. Yes, I make New Year’s Resolutions in January (ad naseum), but fall is when I tend to get a real spurt of inspiration to “Just do it!”

This weekend, partially because I’m dealing with a bad knee, I’ve just kind of puttered around the house. I’ve done some canning, some dog training, some errands. I turned in three paintings to Paint the Town (reception on Wednesday!) and breathed a little sigh of relief that the summer plein air schedule was behind me. Then I did something shocking….

I entered my studio, cleaned off a few surfaces, and whipped out a fresh piece of watercolor paper. After last weekend’s adventure, I had some fresh images just begging to be painted.

That’s when I got into trouble.

In the last several years I have taken about two workshops per year, with 2016 being a very active year. Each one was great, and I would come back all inspired to do new things.

But somewhere along the line, while I learned how to paint, I forgot how to paint like Tara Choate.

When Ruth Buchanan came over in August, she made a comment that my work (both actual painting and some planning pieces I showed her) seemed more tentative.

As the joke goes, “I resemble that.

I am not the only artist who struggles with finding their authentic voice or style. A quick Google search presents books, videos, and articles on this topic. Some of these articles even suggest STOP searching for your authentic voice.

Most 2-D artists use the term “style” rather than “voice”. Looking at Wikipedia’s entry on “Style (visual arts)“:

In the visual arts, style is a “…distinctive manner which permits the grouping of works into related categories” or “…any distinctive, and therefore recognizable, way in which an act is performed or an artifact made or ought to be performed and made”. 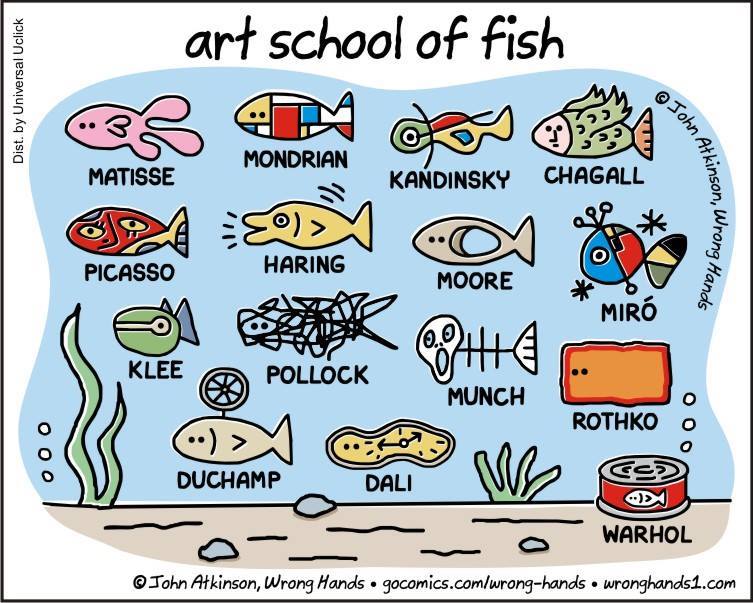 Style is often divided into the general style of a period, country or cultural group, group of artists or art movement, and the individual style of the artist within that group style. Divisions within both types of styles are often made, such as between “early”, “middle” or “late”.

One of my most admired local art goddesses, Margaret Godfrey, recently posted a blog on this subject entitled, “Does and Artist Have to Commit to a Style.” In the blog, she commented on a recent trip to Paris and what she had noted about how many famous painters’ style had evolved. She commented that she felt she was going into a “careful” period.

Personally, I’ve heard artists talk about an artists style being a combination of subjects, themes, forms, lines, color, and texture.

I’ve also heard the theory that an artists style is the mistakes they choose to “lean into”; over time, those mistakes become recognizable choices that everyone can see.

“Real painters do not paint things as they are…They paint them as they themselves feel them to be.” – Vincent van Gogh

Back to that Blank Piece of Paper

So with variation on all of the above (and a few more things) going through my head, I looked an my reference photo (a minor miracle in itself because my printer is… acting up) and thought a version of, “Forget it.” (You might be able to figure out what the real version was.)

I did the drawing and first painting layers on this shot. 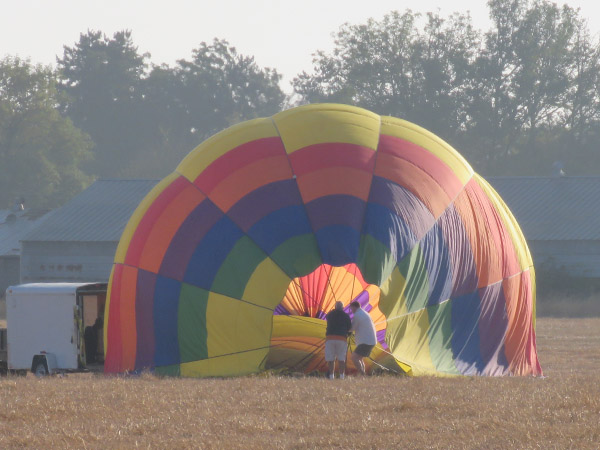 I forgot to take a picture at this stage, but I reentered the studio later and added some more layers to produce this.

I’m not all the way done, but it’s at the stage where I need to think a little more.

Today (for the second day in a row!) I reentered the studio. I wasn’t sure if I wanted to tackle another balloon painting (more about that later) so I brought a simple subject with me.

This was deliberately a simple, quick painting. I like it, though I have some more details to do.

This got me going, so I decided to tackle this. 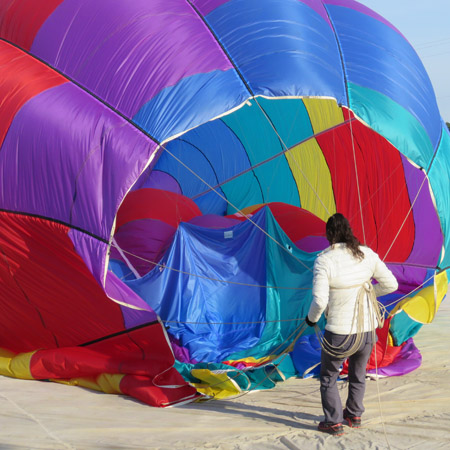 Balloons are hard to do

I don’t know why, but I thought the balloons would be easy to do. Just put down some colors and BAM it’s a balloon.

No. These things are engineered. And when you get in there and start looking, there is a lot that can go long if the lines aren’t just right.

Additionally, I didn’t realize just how hard the color would be; these balloons are shiny, but also translucent, except when they are throwing shade or have wrinkles.

After realizing the difficulties from the first painting, I adjusted the photo to black and white to get an idea about value for the second painting.

Do you see the problem now?

If I was teaching a class I would use this image to teach color mixing and also color value; I guess in a way, it’s my own personal class on those subjects.

As you can see, I’ve changed the light pattern and still have a LONG way to go to darken things up. But I like where it’s going so far.

I suspect that none of these three paintings are destined for shows. When I look at them, I see a lot of overthinking. A lot of choices that other people would make and then I’ve pulled back and painted like me again or (even worse) a third person altogether.

I recently joined three groups on Facebook: American Watercolor Society, Transparent Watercolor Society of American, and Northwest Watercolor Society Members. The lists are active. There is some very good art shown, a lot of very earnest art, and a little bad art (yes, for the record, I believe some art is just bad.) I’ve been studying the entries trying to figure out what I’d label each piece the way I (internally) do.

For very good art, my first reaction is, “Wow!” My next thought is usually along the lines of questioning if I’d hang the piece in my home. If yes, I check my bank balance (always too low). As I usually can’t afford it, I look at what attracts me to the piece. Is it something I want to do myself? Is is something that expresses a feeling I’ve had? Is it just really pretty? If the answer is “No, I don’t want it for my own,” I ponder why not. Sometimes it’s a taste thing. Sometimes it’s a flaw I just can’t live with. Either way, I try to identify if it’s something the artist did deliberately and whether or not that taste or flaw detracts from the piece or if its necessary.

For the earnest art, my reaction tends to be, “I’ve seen it before.” A lot of the pieces I have been seeing art literally without flaw, but they leave me cold. For example, today I studied a painting of an American flag on a porch that was very nicely done. The darks and lights were attractive, the paint well handled, the drawing accurate. I mentally compared that to LaVonne Tarbox-Crone‘s painting, “State of The Nation”; it’s an extremely tattered American flag against an absolutely stark white background. AND IT’S STUNNING. Earnest art tends to have no edge. It’s seen and quickly forgotten.  Almost all art has something going for it (the exception are later), but earnest art tends to be well done but safe. 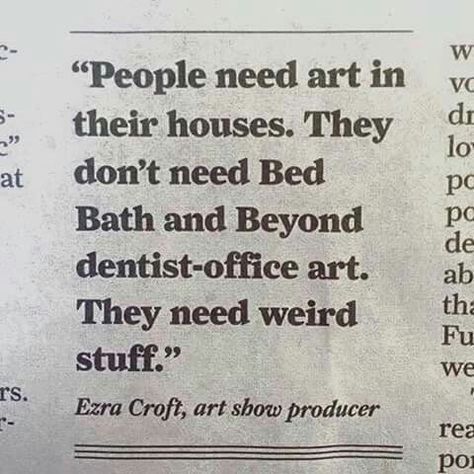 As for bad art, well… my definition is that it’s “art” done without thought. Ikea prints of Audrey Hepburn. Lowe’s canvases of flowers. Anything that’s got blood and guts (or poop) on it. And a shark preserved in formaldehyde is also not art.

All this is to say that I suspect I am in the “earnest” stage after a brief flirtation with the good stage. Rarely does progress come in a straight line. 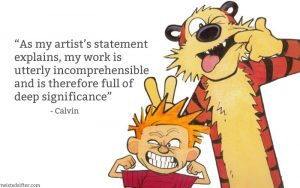 On the other hand… maybe Calvin is onto something!