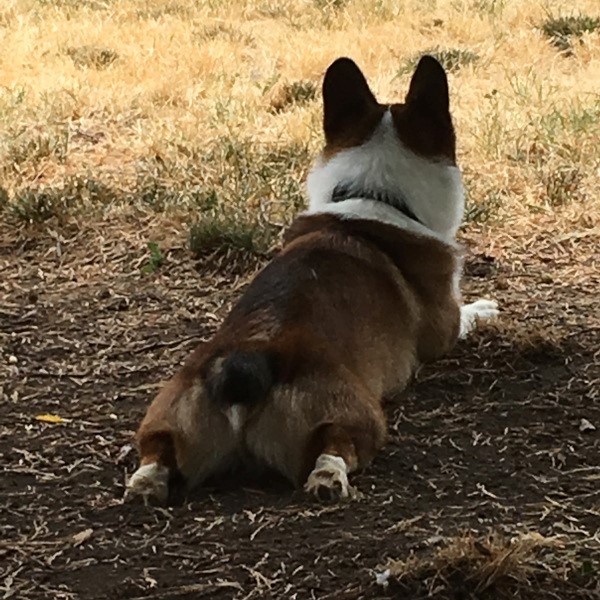 If you walk up to any person who regularly works with animals and ask them, “Do you know about [insert name of animal here]?” they will almost inevitably demur with something that sounds like, “I know a little.” There is a reason for that, and I’m the example.

While I started “late” into dogs (19), it was an intoxicating drug and I’ve spent many hours training, practicing, and basically fooling around with dogs. I did dog agility and even became a judge. I’ve taught agility. I’ve taught a 4-H group. I’m currently into nose work with Key. As a few of you may know, I owned and ran a self-serve pet wash for seven years.

Over the years, I’ve had rescues. I started out with Sean, my lab. Then Pierce, a schipperke;  Ginger, a mix; Finn, a sheltie; and now Key, a mix.

However, I’m no expert. I’m not even a talented amateur. I’m more of a dilettante. When people ask me for dog advice, I refer them to a competent, certified trainer. I am forever recommending taking a dog to some class or other. I’ll even google answers for people.

I am NOT an expert.

I’ve wanted a corgi for years. Essentially since I was 19 and discovering which kinds of breeds might be out there. Recently, I’ve been “liking” a bunch of corgi pages and rescues on Facebook thinking a second dog might be in my future. I’ve also been talking to some breeders, but a puppy is at least 2 years out.

Then the other day, a cute little face filled my screen. It was for a rescue I had not heard of before, Corgipalooza. It said they were looking for a foster home in the Portland area. I went online and filled out a foster application.

(Note: Anything I say next is not a complaint about either Corgipaloosa or the dog, Bandit.)

The very nice founder, “S”, contacted me and after an interview, it sounded like I might be the right foster stop for a dog coming into rescue with possession issues. Bandit had come from across the country and had lost his home for biting a child. It was a typical story, all too familiar to rescue. Bandit needed some time to decompress and get months of being in lockup out of his system.

I cleared my schedule and Sunday drove up to pick him up. And he is ADORABLE. Just the sunniest, cuddliest dog. Totally acts like he wants nothing more than to be your friend and everyone else’s. After we got home, the walks commenced. We got in four walks as well as extensive hanging out in the backyard.

The “trouble” started innocently enough. Bandit picked up a stick and brought it to me. So I thought he might fetch a tennis ball. I went into the house to get one and threw it. Now, Key will bark at the ball. He will run toward it. But fetch? No. However, Bandit LOVES the ball and it was HIS! He went from 0-60 so fast. Honestly. No growling, no warning, just BAM! Key gave up and Bandit STILL went on. I grabbed a house and squirted and that was the end of that. No one was hurt and it seemed like no hard feelings. I went into the house and picked up EVERYTHING that might be a toy or possession.

About 5, Key went into his “dinner time” routine, so I went into the kitchen to prepare food. I took down a can and my next stop was to kennel up Bandit so nothing bad would happen. But before I could get there, BAM! Bandit was on Key and this time made the first look like a squabble. I was able to splash some water from a nearby glass and end it. Bandit went into the kennel. I fed everyone and afterward kept everyone where they were because I needed to do some food prep. Then I noticed Key was bleeding.

While I’m sure Bandit just meant to drum into Key that it was ALL HIS, he had raked Key’s face and opened up a cheek. So, we went to the emergency vet and poor Key has a shaved leg, shaved faced, and three stitches. Sigh.

In both instances, I was very startled by how quickly and quietly Bandit had attacked. It is clear that he has been taught NOT to growl, which is a shame because it’s the first warning for a dog.

The next morning (Monday) I got up and loaded up the kids and we went for a long hike before work. I was a little nervous about leaving everyone together for the day, so I kept them apart for the day, rotating each dog in and out at breaks. When I came home at lunch, I noticed Bandit was fence fighting the next door dogs, which was clearly not as relaxing as I had hoped.

That evening I was unloading the dishwasher (no food) and Bandit again went after Key. Quietly, quickly, and ruthlessly.

I had been in touch with Corgipalooza, but between this incident and the fence fighting, I was very concerned. Not just about Key, but that this might not be a good foster for Bandit, as he needs time to decompress.

This morning (Tuesday) I took the kids for another long walk and also was able to talk to “S” from the rescue. We talked about some ideas, including a basket muzzle, completing banishing Bandit from the kitchen (a hot zone), and allowing Bandit some alone play time. “S” said she could put Bandit in another foster, but she still thought we might be a good fit.

So, this evening I  took Bandit out to a fenced area and chucked the ball for him. And he loved it. The only reason we stopped was because of the heat. 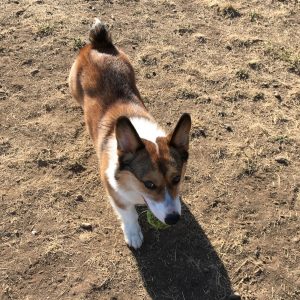 I also got a basket muzzle that he’ll wear when in more unsupervised situations (thinking moving between rooms and getting outside in the morning). And treating the kitchen like boiled lava for him, because it is indeed an area that causes him to harass Key (another small incident this evening, but much shorter).

What gets me about the situation is that I thought I could do this, no problem. Only to find out that I don’t know nearly as much as I thought I did. So, I’m back to training wheels and feeling like an idiot.

So what else is new?