The last couple of years, I have been captivated by the bird cams hosted by the Cornell Lab of Ornithology. The first year it was the Red-Tailed Hawks that caught my fancy, followed by the antics of the Great Blue Herons (with their FIVE babies!)

Last year I mainly watched the Kestrels (with only three babies, the herons were less frantic.)

This year the Red-tailed Hawks (Big Red and Ezra) have already started their brood, with three eggs laid. Three has been their number, so I’m not holding my breath for another egg. 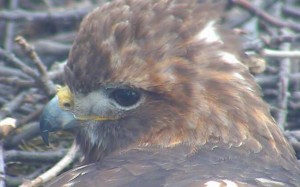 I started watching in earnest today. My favorite moment was toward the end of the day when Ezra flew to the nest to offer Big Red a nice juicy mouse. She deigned to take it and leave, and Ezra settled in for a nice snuggle with his kids, tenderly rolling them before settling down flat to protect them from the wind and rain. About an hour later, BR came back. Ezra wasn’t ready to give up his time, so she came over and stood on him until he gave up.

I’m so easy to amuse.