At the last Open Studios of Beavercreek I hung out at the home of Connie Veenker for Open Studios of Beavercreek. I also shared space with another artist, Larry Baird of Not Too Far From Here Photography. As you might guess, Larry is a photographer and I heard a lot of great stories over the weekend about his photos, his trips to Africa (5), and various camera equipment.

For me, this was a little bittersweet (notice over a month has gone by since Open Studios). Dad was the constant photographer in our family. We have thousands of photos over the years, and 98% of them were taken by Dad.

Along the way, he also seemed to collect cameras. When going through his things recently, we found three antique cameras, four inexpensive digital camera, and his “big” camera. 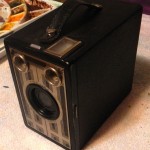 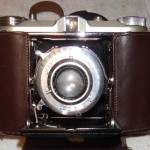 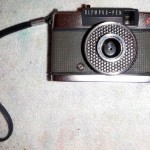 I still remember him getting the “big” camera. He  made a special “gun” type holder and went around for most of the summer, hoping to get a great shot. I remember the first time I was trusted to hold the camera and how special that felt. In subsequent years he only pulled out the “big gun” on special occasions. 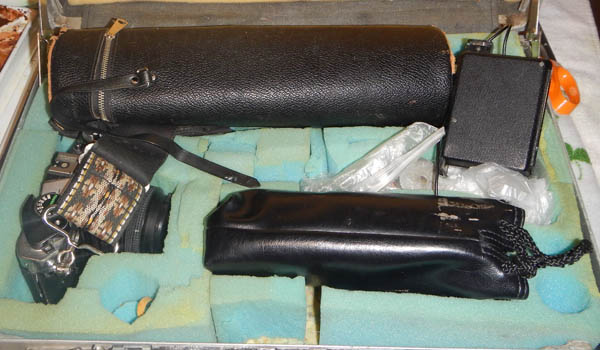 The “big” gun with several lens in its carrying case.

Dad never really transitioned over to the digital age. Computers were not his forte, and the idea of digital editing and all the rest just never caught up to him.

With his passing I have inherited his vast collection of film equipment. Physically, nothing he has is very expensive. Even the “big” camera lens is probably worth less that $50 on ebay.

I’ve asked a few people some questions about whether or not the lenses could be used on a digital camera; the shortest answer is no, with the medium answer being “with difficulty.”

I’ve been pondering if the emotional value of these cameras is worth anything to me. I posted a picture of Dad with his camera a few days ago; that’s the memory that sticks with me. I will never use these cameras again (I can’t imagine going back to film, either from a usage standpoint or a cost standpoint.) And having them cluttering up my office isn’t very exciting either.

So this week I decided to list them on ebay. I’m surprised that all of them already have bids. I hope they go to a good home.