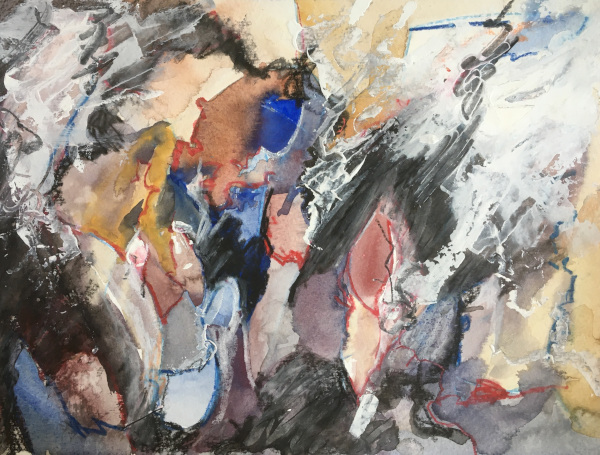 To paraphrase Victor Hugo, some weeks’ function is to serve as a bad example. This was one of those weeks. By Friday, stick a fork in me because I was done.

I sat down in my studio Friday evening and basically destroyed some paper.

I would like to report, that got it out of my system. Maybe it did. Saturday I began work on a new painting, continuing my recent exploration of western equestrianism.

I got the image on paper, and then started looking for masking fluid to preserve a few whites. I discovered that the masking fluid was still down at the beach house. I had a small list of items I needed at the craft store, so I loaded up the dog (Key) and made a Craft Warehouse run. I’ve been to this store many times and I know where things are. I figured the visit would take 10 minutes on the outside. And I was right. Here’s what I didn’t count on.

As I mentioned, I brought Key. My yard still hasn’t been re-fenced, and I’m a little nervous about leaving him until that is accomplished. It was an overcast but warm day, about 72, but not hot like it had been the rest of the week. For a 10 minute wait, I figured he could handle it. If it had been any hotter or if I had been secure about the fence, I would have left him home.

I went into the store (mask on) and grabbed my three items, then stood in line for a few more minutes. As I was standing in line, I heard an employee walk by saying something about, “Of course the dog is barking–” Key has separation anxiety, and I was concerned that he was disturbing people. Jst a few moments later, over the loudspeaker, a voice said, “Would the owner of a gray Subaru come to the front counter…” As I was next in line, I didn’t do anything, but while I was checking out, I asked the cashier why I had been called. “Oh, someone complained that your dog was locked in the car and it was too hot.”

Now, let me pause here. Anyone who has been on any kind of social media any time in the last 10 years knows that pets should not be left in cars on hot days. I agree with this. I think maybe the warning have gotten a little overzealous, but better safe than sorry. 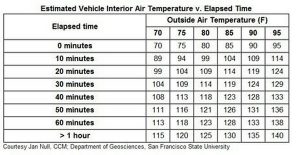 Out of curiosity, I went online to find one of these charts. If we accept the data (and I’m not 100% sure I do here), the temperature would have got to 94 degrees. I don’t know if this calculation takes into account having windows cracked, but mine were, which does help. Finally, the parking spot I selected did not have direct sunlight. In short, I am confident that it was nowhere near 94 degrees.

Resuming my story, I left the store and went back to my car. Key was resting comfortably in the front seat, no panting or showing any signs of distress. He wasn’t even barking. I opened the side door to put in my purchases and give him a quick pet. The car was certainly not 94 degrees. As I was petting him, a woman approached me (more like pounced…)

Now, in this day of social distancing, it’s unusual to have anyone approach anyone. Even odder, she was not wearing a mask. I was a little alarmed. She started talking, “I can tell that you love your dog, but did you know that leaving a dog in a locked car on a hot day can be fatal?” It was not an actual question. Additionally, it’s a rather silly question due to the social media angle (see above.)

Back in the store, I had rehearsed what I  might say. “Thank you for caring about my dog, but the windows were rolled down–” I started.

“Only an inch,” she accused. “I’ve been waiting ten minutes.”

It is worth noting at this point that she had invaded my personal space bubble, which would have been bad even in a no-COVID world. And she was not wearing a mask. I started to feel frightened for a multitude of reasons. I looked at her and realized that there were no words I could utter to defuse the situation, even if I was good at that kind of thing. She was either a crusader or someone who had been triggered into blowing up.

I closed the side door of my car, opened the front door, got in, and closed the door. The woman kept talking, reaching for the door handle. I locked the door. She turned to her friend (who I had not noticed standing there) and started saying, “She doesn’t care. I mean, she doesn’t even care.” I took a deep breath, carefully backed out of the space, and left. I prayed that the unnoticed friend had not been taping the whole interaction for YouTube.

Mood completely ruined, I came home and called a friend. After a while, I finally worked on the painting that sent me out into the (crazy) world. I also did this one.

I’ve really been struggling the last few weeks with the world in general. Facebook feels like a minefield. Nothing we do is normal because of the virus. Social justice protests are everywhere and have inspired me to take on some reading, which is disturbing to say the least. Friends from work are transferring out and even those that remain are visibly stressed. And this move is proving to be more emotionally difficult that I hoped. This week felt like many stresses came bubbling to the fore.

I don’t have a good conclusion to this post. I simply don’t have words to express my discomfort, grief, and anger. I am speechless in the face of extremism and intolerance. In short, I am without voice in a world where everyone is screaming. 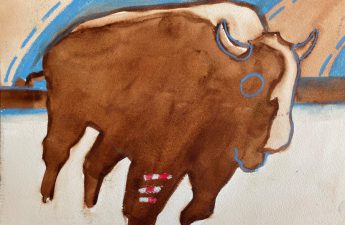 1 thought on “Four paintings and an attack”