For the Seventh Generation

A Community of Coastal Watchers

Our oceans are continually threatened by pollution, coastal development, and over-fishing that taxes these finite systems. Decisions made today are to be mindful of their impact on the environment and on our children, grandchildren, and future generations. Without a strong advocating voice, the ocean’s health will be left at the whim of politics and industry

Goal: To create a one-mile ocean panomural project comprised of images from every mile of the Washington, Oregon and California coasts.

When I applied to “For the Seventh Generation”, I knew I wanted to paint the look out from Coronado Shores, where my parents had had a small home they built themselves (before me.) I knew I would have years of material and memory to paint with this location. This is the first in this series, and it’s about a storm. One year, when I was small, we were down at the beach for the Thanksgiving break. The barometer dropped, and my dad became really excited. That evening, he bundled me up into this enormous old army-green raincoat and we walked down to look at the storm. I don’t remember anything except how wet, and cold, and windy it was. But I knew I was safe with Dad. In later years, Dad would tell the story about the barometer drop and say how I was “nearly blown away” by the storm. 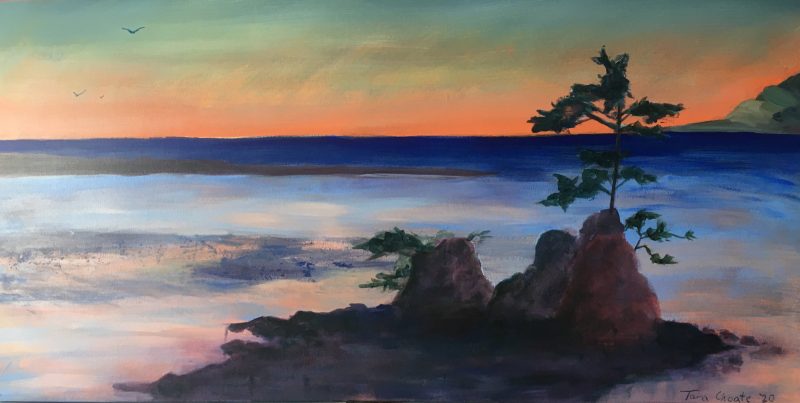 this is a gentler image. These rocks are a familiar sight to those who know the Lincoln City area. A few years ago, I had a guest from England, and the sun went down just as I was showing off the bay. We stopped and snapped dozens of reference photos. I liked not painting the brothers with their traditional spacing as you look at them from the north; rather this image is from the west, and you can see that the even spacing is just an illusion.

These paintings will be dropped off in a couple weeks at the Elizabeth Jones Art Center and will show in the For the Seventh Generation show in October.