Well, I survived the Rose City Yarn Crawl this last weekend in good form and relatively inexpensively. There was the purple “Birds of a Feather” purchase. Then seven skeins of a red linen yarn I hope to turn into a tank top. Then two skeins of discounted mohair I got for a steal. Great job and restraint! 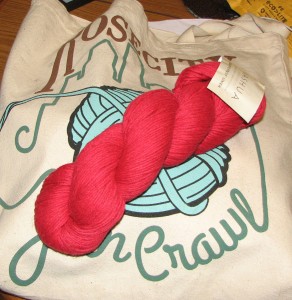 This evening I attended painting class and finished two paintings (such a great feeling)! I’ll post about the second one next, but one of the paintings was a little different for me.

Each year I make noises about entering the Oregon Society of Artists Rose Festival Show. And then I don’t do it.

When Angie suggested a project where we used layers of masking to create a painting, I thought about doing a rose and getting a jump on the deadline.

I don’t do a lot of flowers. I like flowers, I just typically get distracted by something else. But I decided to go for it… and for once do it how Angie suggested. 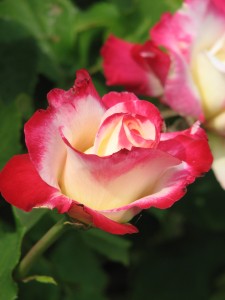 Of course, that doesn’t mean I can’t make it my own. I fooled around quiet a big with the layout of my original photo to get something more dynamic and interesting. And I decided to not use red because that would be too obvious for a rose painting.

I kept my colors pretty traditional for the first level. For the second level, I masked over the light pink and left just the ends where I applied a dark purple.

Next I removed the masking and applied the inner shadows in a neutral wash.

It was at this point I had to make a decision. The painting was good, but not great. It was pleasant but not the eye candy I had envisioned.

I will look at this for a few days and if nothing else occurs, I’ll sign and frame it. Done in good time for the June show!