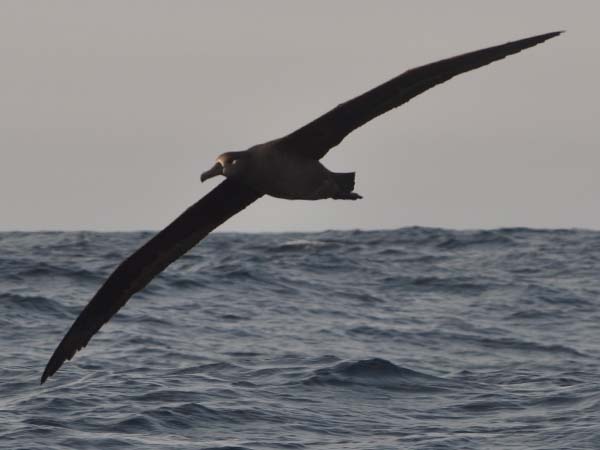 Saturday (December 9, 2017) I went on a 7-hour seabird tour with Oregon Pelagic Tours. I have been following them on Facebook for a while, and they said this December tour was something new they would try. Being winter, I figured it had a pretty good chance of being cancelled, but I decided to try it anyway.

I did not worry about being seasick. I’ve never had a problem with any kind of motion sickness. Like EVER. Turns out, when you get 20 miles out to sea in a boat… almost everyone not on dramamine gets sicks. I feel this is information worth passing on.

I’ll leave you to imagine how I know this. Instead, I will put up lots of the lovely, interesting pictures I took while not hung over the side or concentrating fiercely on the horizon.

We set out in our boat, the 25 of us and our valiant leaders. 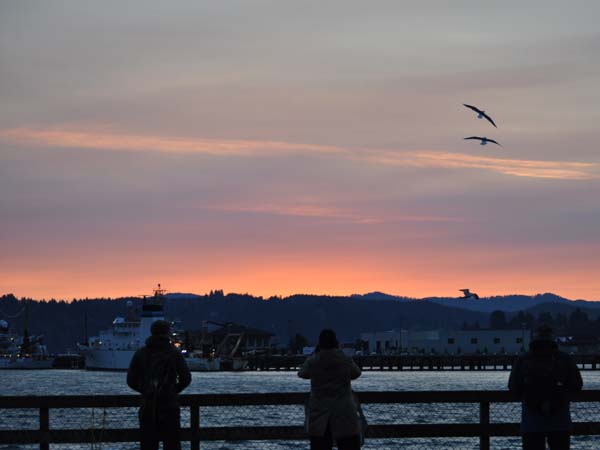 The NOAA ships, docked in Newport, were decked out for Christmas. 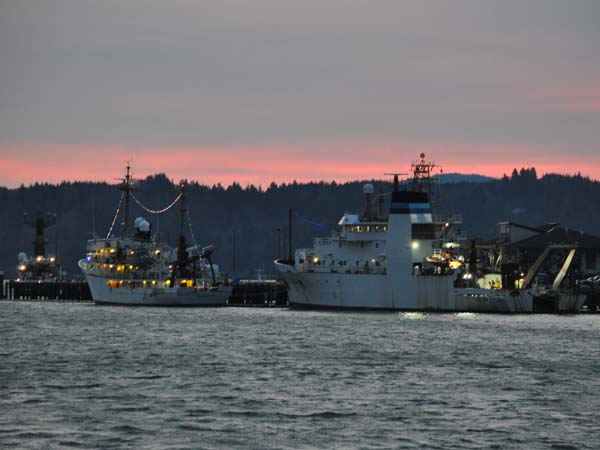 We left along the jetty, where we saw most of the variety of the 40 birds species I checked.

After we left the jetty, I earnestly looked out for birds. I saw gulls. I learned to identify (at a distance by the way they fly) common murres. I ticked off the guy sitting next to me by accidentally viewing a Cassin’s auklet (no idea…)

Unfortunately, it was about at this point I started to get seasick. I was far from the only one. I was only sick a couple of times, but I spent most of the rest of the time earnestly sipping the ginger ale I had (wisely) brought and gazing at the horizon. There were several people who never did stop being sick until we returned to the harbor.

During this period, while I was unable to get a picture of any of this, we saw a pod of whales doing fluking maneuvers (because this was right along the continental shelf, and because the flukes were SO white, a part of me wonders if these might have been humpback whales), a small pod of dolphins (I don’t know what kind) following the boat, Stellar sea lions coming over to take a look at us, and Northern fur seals basking one side of their body at a time in the sun like mug handles (if you want to see a picture of what this is, go here and search for “floating”).

When we got about 30 miles out (the trip records a total of 84 miles, out and back) we went past some deep sea fisherman, but the birding was not right. So the crew went a little further out to follow a commercial fishing ship (the kind with nets hanging out the side.) There the tour leaders poured popcorn, stale bread, some beef suet, and code liver oil into the ocean to make a (slick.) And we waited.

Now, no matter what you think about these pictures, remember I was seasick and in a boat that was no turned on and was just rolling with the waves. Also, remember, there were abut 25 EXTREMELY EXCITED people with big cameras on the boat who were REALLY intent on getting pictures. Under those conditions, I think these pictures ROCK.

This ended up being my favorite bird of the tour. I couldn’t believe how beautiful they were, softly gliding above the waves, never flapping their wings.

If you looked out over the water there were dozens of these these lovely gliders appearing over the waves, up and down. After the desert of miles 2-20, it was amazing to see so much activity.

I was trying to overcome my seasickness to get a few good pictures, particularly of the albatross, when the whole boat started shouting.

A short-tailed albatross was coming in to see what was going on. This bird breeds in Japan and (occasionally) the Hawaiian islands. This was a young bird on his first tour. Everyone was REALLY excited to see him, even those hanging over the side of the boat.

There were two boat crew members, three guides, and the rest of us were bird watchers. And about half of these people were BIRD WATCHERS!!! They had enormous cameras. They had seen 300+ types of birds this year in Oregon alone (I’ve seen 149.) And these people were agog at their good fortune at seeing this S-T-A.

After this excitement, we also saw some black-legged kittiwakes. Apparently something called a shearwater was seen (pink-footed, sooty, and short-tailed were called.) While I did see the kittiwakes,  I never saw any kind of shearwater.

The boat was moved a few miles to the north and another slick was created, but for whatever reason, this one was less successful than the first. Then we started back home.

As soon as we reached the continental shelf (about 10 miles away from shore?) my seasickness went away. I was tired. My stomach was acidic. But I could move around again.

And thus, just a few minutes after 3:00pm, we returned to Newport.

Disclaimer 1: I’m not a terrible blogger; I’ve had a cold and I was sick most of last week.

Disclaimer 2: Pelagic is a real word. It means “relating to the open sea.”

List of birds seen, heard, or generally was in the vicinity of

2 thoughts on “Pelagic Tour (On the Open Sea)”