Every so often, I publish a “stealth post.” This post will be one of those. I tend to process things slowly, and writing about difficult topics can help me put things in perspective. I usually don’t go out of my way to publicize these posts because the topic is personal and not “on point” to the art blog I try (with varying degrees of success) to cultivate.

Last week was a tough week, though I really didn’t expect it to be. I’ve been feeling pretty good lately. The beach house is finished. I still miss Mom, and probably always will, but the end of the “first year” is in sight. The holidays seemed to be cooperating with my desire not to engage.

Then Monday I didn’t feel well (female troubles). I went to work and made it through the day, but in retrospect, taking a sick day might have been better.

Tuesday all other people in the world decided this was a full moon that was gonna COUNT. Words cannot describe the wiggly-ness of the world at large, but it was A DAY (and then some).

Wednesday, I headed off to work, and then went to help at an event. The State of Oregon has a food drive every February; Wednesday was the kick-off event. (History: The first two years I worked for the state, I helped on an agency level; the last three years I have helped on the state planning committee. This is something I care about and I’m very proud of this work.) The plan was that I would help with, well, whatever needed helping with and then take charge of a small group and answer any questions people had. Simple enough.

I got there and started helping with the exciting tasks of stuffing folders and counting posters. Pretty soon I was helping with check in. It was weird, though. We weren’t getting the volume of people we usually get. About five minutes after the event started, a HUGE rush of people walked in the door. A train had blocked the tracks for 20 minutes, delaying everyone and adding a certain level of desperation, exasperation, and general crankiness to the events.

Now, that set of emotions has never had a beneficial effect on any group of people, and this set was clearly having trouble following directions. “Should I put my name on my name tag?” “Should I take 20 or 22 posters?” No one seemed to be able to use the name tag station (set up for two people) in tandem with anyone else, which slowed everything down. Directing people toward the doors of the event was harrowing. At some point, I remember telling the indecisive poster person to go ahead and sit down, we’d sort it out at the end (note: It appears I did not SAY that, but that’s the gist of what I meant.)

Finally, the crowd thinned. We were making sure the names were coordinated and the posters were stacked correctly when the gal sitting next to me said, “That was really inappropriate!”

Caught off guard and confused, I searched for what she could mean. “Ah, yeah…” Her tone and demeanor indicated that something was DEEPLY wrong. It appeared that I was the cause, but I just wasn’t picking up on what had happened. I said, “I’m sorry, can we clarify what we’re talking about?”

“You just can’t talk to people like that,” she snapped at me.

I blinked. “I’m sorry. I guess I got a little anxious because everyone was late, and–”

“Then maybe this isn’t the job for you,” she said sternly.

“Are we talking about the poster gal–” I started.

“Yes,” she growled. “We’re trying to make sure that all these volunteers have a good experience. You just can’t talk to people that way.”

Right here, my mind stopped. I replayed (as best I could, which wasn’t great) what had happened. I realized that what I had been trying to do in keeping everything efficient, rushing people through, and telling “poster person” we’d sort her out later had come across as rude, cross, and unfriendly. Possibly other things as well, depending on what I had actually said.

As the full impact of this swept over me, I started to make excuses, caught myself, and simply said, “I’m very sorry.”

She didn’t continue and instead pushed paper around in an angry manner. Realizing I was starting to cry, I got up and helped another volunteer to count posters to fill orders. When we got done with that, I was supposed to go into the event for the question and answer session. I stepped outside to try to regain my composure. And I realized composure wasn’t coming back that easily. So, I grabbed my coat and left. Once I was back at work, I confessed my inexcusable behavior (in between hysterical sobbing) to my boss, then went home to take a couple of hours sick leave.

The next day (Thursday), wracked with guilt, I wrote an apology note to the planning team, both for my actions and for leaving them short-handed. Friday the head of the committee wrote a terse email back thanking me for my apology (but offering no forgiveness) and kicking me off the team.

I am now in limbo to see if this matter will drop or if I will have to go through a more formal punishment with my agency and supervisors.

Friday evening I saw my therapist and told her about the incident.

Here’s something else that’s been going on in my head lately. A few weeks ago I took another load of Mom’s papers to the shredders. As usual, I briefly looked through them to make sure nothing “important” was there. I found Dad’s complete military record, both Mom and Dad’s complete employment record, and every tax return since 1972. I’m not exaggerating.

I briefly flipped through Dad’s employment record to see what it was before relegating it to the shredder. On top was an “official warning” from 1982. I remember this period, though I didn’t know the back story. Dad was an industrial arts teacher at a junior high. Apparently, Dad had gotten into some trouble; he had been in a couple incidents while coaching baseball, had called a child “a moron” to his mother, and had been cited several times for getting overly excited in various situations. As I was looking through all this, I remembered Dad shouting about all this at the dinner table and curses he would hurl at the principal of the school. I was 7-8 at the time and I remember being terrified.

When I found this letter, my first thought was, “This is proof that I’m not making him up. He really was like this.” The second was, “I never even had a fighting chance.”

Because, you see, that warning was about me. It cited the kinds of things that I seem to do without realizing it: become overexcited, over truthful, over argumentative.

It really shook me. The incident on Wednesday is proof that the apple didn’t fall far from this particular tree.

Dad was dyslexic before that was a thing. Today, he would also be diagnosed with ADHD (his father had many ADHD symptoms.) And his mother was chronically depressed, something both Dad and I inherited. I’ve understood this about Dad for a long time, and while I don’t excuse all his actions, I do see them through this filter (and the filter of a POW and an alcoholic.)

For myself, for years I have known that I am not good with people. As a friend reminds me, “Working with people is not one of your strengths.” But this last incident got me wondering: Is this just a matter of strengths and weaknesses? Or are we talking about a genuine, neurological issue?

I pointed to my therapist out that the term neurotypical was gaining traction. For years I have wondered about the possibility that I might be slightly “on the spectrum”; if I was in school today, I honestly think I would be categorized this way, though “high functioning” or with some form of Asperger’s Syndrome.

My therapist pointed out that is probably a combination; there is an argument for a genetic issue, but there is also a strong argument for this being a learned behavior. But, she pointed out excitedly, it didn’t really matter. The trick was to find a work around. If I move forward with my “neurological” theory, what could I do or say to prevent me from getting into these situations.

Work Arounds (Where to Install the Tara Safety Blade)

As I see it, this is the situation that is most likely have a bad outcome. 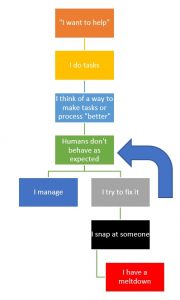 One of the key element to how bad things get is the environment. 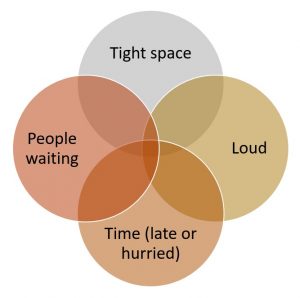 One solution is that I could learn to evaluate a situation and simply say, “I have a sensory processing disorder. I am afraid that if I do ______________ it will not end well.”

Alternatively, in a given situation, instead of moving to the “I can make it better” stage, just content myself with helping. And if more is asked, repeat that my sensory processing disorder statement.

My biggest concern, however, is that I don’t seem to be AWARE of that I am doing this. For years, people have told me that I snap at them. I have no memory or awareness of doing so. Other people complain about me “shutting down.” How this is bad or a problem, I don’t understand.

While I was researching various things, I came across the term “low frustration tolerance” which lead me to this article. The suggestions are interesting, but quite a lot of work.

On the other hand, something has to change. I hate being in the “place” I am now of feeling guilty, anxious, and stressed.