Tomorrow I’m going to photo my finished paintings and enter the WSO show; it’s time to bite the bullet.

However, that doesn’t give you anything new to look at today. So, I’ve decided to show you December’s ice painting starts. 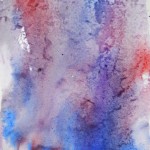 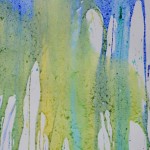 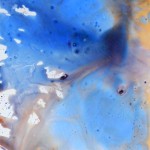 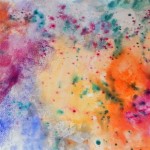 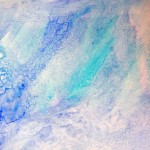 As fellow Portlander’s will remember, in early December we had some VERY cold weather. Oregon, and Portland in particular, is more known for rain than cold. But this was cold!

On Facebook, Liz Walker and Margaret Godfrey inspired me with their ice paintings.

So when the weather cooperated by remaining cold over a weekend, I took a variety of colors and papers (cold press, hot press, and yupo) out and tried my luck.

Day one was a little less successful than I hoped for. Rather than the striking patterns that Liz and Margaret got, I got a rather mottled design that wasn’t unpleasing, but wasn’t what I hoped for.

I googled “ice painting” and came upon Kathleen Conover’s website. She poured rather than painted, so Sunday I poured.

The results were better, but I still didn’t get the dramatic “ice” effect.

Then Liz imparted this wisdom: “You have to use acrylics.”

Maybe for the next cold snap.