Forgive me for this rant. It’s a rant about something distinctly first world, but I find myself unwilling to keep it bottled up.

Why is it so freaking hard to get a good haircut? 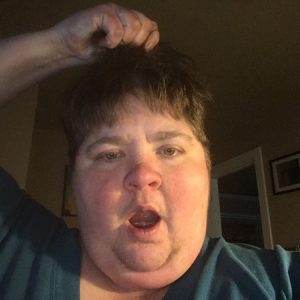 Pulling my hair out…

It’s been years since I consistently got good haircuts. I’ll fool around with the salon routine for a few months until the hassle of it all gets to me, and then I’ll return to a cheap chain store where I can get in and out whenever it suits me. More time goes by and then I’ll get an exceptionally bad haircut (really just random cuttings with me saying, “Ah, don’t you think that piece is kind of long still–“) and I’ll try a hair salon again.

If the hair salons gave a nice, simple hair cut in a nice simple amount of time and just let me be me (cut some off, in and out, don’t try to sell me things) I’d be happy to pay their price. If cheap chain stores would stop allowing clearly drunk or otherwise inebriated people to give haircuts, I’d be happy with that.

There is no way to find a middle ground.

According to the media, most women enjoy having their hair fussed over. I am clearly in the minority. My short hair is unfashionable and unaltered. I’m completely cool with that.

And I don’t think I’m that much of a minority. Men, can I join your club?

One half of the world’s population is allowed to get a nice, simple haircut. They are just able to go in and say I want a hair cut. They don’t get a million questions. “How do you style it?” “Do you like it shorter here?” “What kind of product do you use.”

I know that’s changing, but, men, I’m telling you. Don’t let them take it away. You don’t know what you have!

I am giving some presentations at a conference over the next couple days, and then my mom’s memorial. It’s been about four months since I had a haircut. So I thought it might be a good time, and with these important occasions coming up, I thought I’d try the salon treatment to avoid an embarrassing disaster.

I told the salon I didn’t mind someone inexperienced, so they put me with a sweet gal who was on her FIRST DAY. I hope she gets better. She dropped things. She got her fingers caught in my earrings. And she took over an hour to cut my hair WITHOUT giving me a shampoo. I swear, she cut each individual hair on my head. And then cut it again. To say that she was slow is like describing someone driving 35 in the I-5 fast lane as leisurely. Not only that, she kept conferring with her supervisor, asking me questions about, “Did I want this to be short, too?”

Yes, my dear. I would like all the hairs on my head cut.

When I was finally able to escape, I came home and trimmed up the areas that I just couldn’t ask her to cut shorter for the third or fourth time.

I feel bad about complaining about someone on her first day. But what I’m sensing is that because this was a “salon” she just assumed I wanted a lot of cutting and fussing. No matter how many times I said, “Oh, do whatever you think is best,” she couldn’t take the hint.

The salon is clearly in the same mindset. When I entered, they gave me a questionnaire so they could “get to know my hair better.” Is this a date or a haircut?

The questionaire had as many questions as the standard doctor’s intake.

That I have hair.

Currently, that it’s too long.

I had intended to go to my local Audubon birding night before I got involved with the epic poem of haircuts. That didn’t happen. And now I  need a nap.