No, I haven’t forgotten to blog; I’ve just been so busy that I’m completely backlogged with things to say! But my goal this weekend is to churn out some posts… here goes! 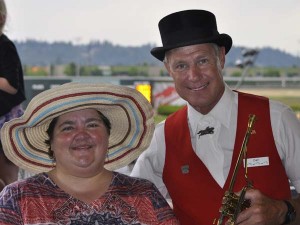 Me and official bugler Dan! I love that hats are a total thing at the races… the bigger the better1

Last Sunday I went up to Emerald Downs to enjoy the day of racing, see the Equine Art Show, and pick up my paintings. My friend JJ and two of her sons, Ethan and Ryan, came up with me. It was a really great day. We got their early enough to get a picnic table, rented a shade umbrella, and enjoyed the day!

The Equine Art show was VERY strong this year, particularly in the watercolor division. I was disappointed that none of my paintings received an award, but the award winners were so strong, I couldn’t really find fault with the judge’s decisions.

As if to make up for it, I became a rich woman by winning $1.60 over and above my bets.

The art show was fun, and so was picnicking with JJ and the boys, but of course the real excitement was the horses. I took the newer camera with the telephoto lens and I think I got some good photos to keep my inspired in the upcoming year. 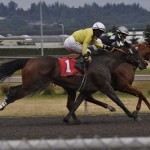 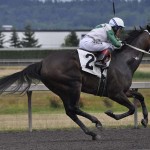 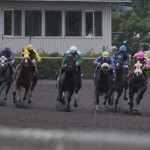 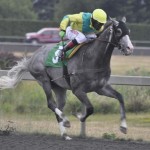 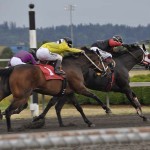 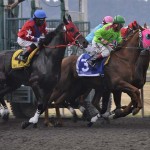 Unfortunately, for the first time I also saw a serious fall; the horse was vanned off, never having gotten to its feet, and the jockey is still sore and not riding a week later. I haven’t been able to find out if the horse made it, though I asked several officials. I am keeping my fingers crossed because I overheard a couple of the pony riders talking about how the horse was hyperventilating even 40 minutes later; hopefully it was scared more than hurt? In the next race another horse was pulled up, and I found out from her trainer she had a slab fracture on her knee, but was resting comfortably. If anyone has more information, though, I’d love to hear about. I’ve scanned the web, but the industry is pretty closed-mouthed about this kind of thing. 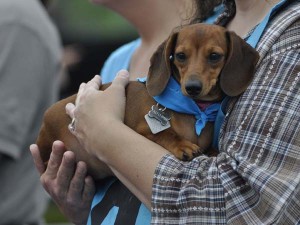 On a lighter note, the Weiner Dog races were taking place. Those were a lot of fun. I’m contemplating a painting entitled “Weiner’s Circle” for next year’s show. The slogan of the Equine Art Show is “The Horse and a Whole Lot More”; I think this would fit!

I also had a good time hanging out with JJ and the boys. I haven’t been around teenagers a lot; I knew going in that enthusiasm would be asking for too much, but I was surprised they weren’t more active. JJ says that they didn’t complain and thus the day was a ROUSING success. I’ll take her word for it, but I had a good time!