The Breeders Cup is this Friday and Saturday and if you have liked ANY racing pages on social media, you can’t miss it. In addition to great photos and opinion pieces, the articles have been a lot of fun and give a real feeling why this is not just an event, but THE EVENT.

Of course the Breeders Cup Classic, with it’s American Pharoah / Beholder / every other superstar story line is the main focus, but there has been a lot of other things to take in.

Steve Haskin’s piece “Let the Fun Begin” is a good summary of why almost any race on the weekend’s card is worth noting.

In all the excitement, however, one story line has caught my attention, and it’s not even on an official Breeder’s Cup race.

The Marathon (Gr. II) was dropped from the official Breeders Cup last year, but it remains on the undercard of this supreme racing weekend. I was disappointed about this decision; I’m a big fan of longer races. In Europe longer races are common and they are all about stamina and strategy… perhaps why they are less popular in North American racing which caters to races of around a mile on similiarly shaped (oval) course instead of the winding track of Europe that sometimes have hills and valleys to overcome.

The Marathon often brought European equestrian royalty across the pond, giving the race an altogether different flavor. The 2013 Breeders Cup Marathon (sadly the last) was an epic race.

This year the race will be the last on the October 30 card at Keeneland. One particular entry caught my eye: Dynabeaver, an Oregon bred by Grindstone, a Kentucky Derby winner standing in Oregon.

A three-year-old bay colt, Dynabeaver (barn name Adam) is trained by D. Wayne Lukas (who also trained his sire Grindstone to his Kentucky Derby win) and owned by his wife Laurie. This colt clearly has a powerful set of believers. Since starting racing in May 2015, he’s been in seven races with two wins and one second. 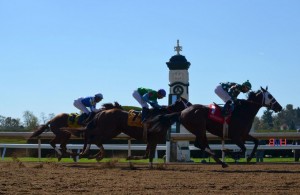 Dynabeaver winning at Keeneland October 18 less than two weeks ago! 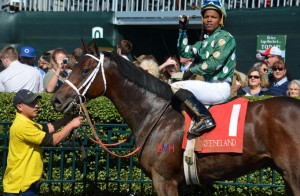 Two Facebook favorites, Bailoutbobby and Lideris, both trained by Doug O’Neill (who does a good job with his Facbook marketing) will also be running in the Marathon. Both are going off at better odds that Dynabeaver (6-1 and 4-1 respectively.) They are gorgeous; my apologies about stealing the photos off the Facebook page. 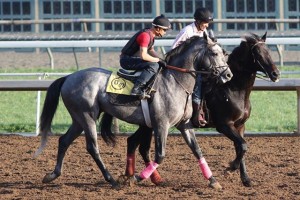 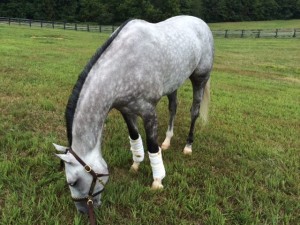 If you watch the races and see this lonely Oregon bred, you’ll know about his Oregon connection and that I’ll be rooting for him.