As I told you back in January, I have been training Key in the noble game of K9 Nose Work®. In January, Key successfully navigated his Odor Recognition Trial (ORT) and a few weeks later, a little bit by accident, we picked up a Nosework 1 title (NW1).

“NW1, NW2 and NW3 titles are granted by successfully passing (receiving a score of 100 points) each element at the same trial.”

A few months later we entered an “element” trial and got a leg (but no title) in Vehicles and Exteriors. The fault was entirely mine. On the vehicles, I let a very large motor home freak me out and forgot to have Key search once side, then compounded the problem by not believing him when he didn’t find scent (moral of the story: Tara is a dork.) On the exterior, I just called it too soon; I recognized Key was “in odor” but I didn’t wait long enough for him to find the source (moral of the story: Tara is a dork.)

Frankly it was a humbling trial.

A few weeks ago, Key and I were set to go down to Grants Pass for another element trial, but at the last minute I had an emotional breakdown best not described. I decided to take it easy and not drive around the state to stressful things. 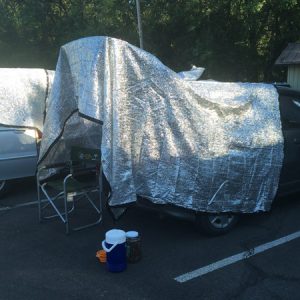 My car, decked out with a shade cloth and Key in a crate with my folding chair and lots of water nearby.

Last weekend, we were able to just drive 45 minutes (not 4 hours) down to Corvallis to compete another element trial, this time Containers and Interiors. It was REALLY hot, which I worried about, but Key couldn’t have cared less. If he had a motto, it would have been “SHOW ME THE SCENT!” Key picked up a L1C and L1E title like it was nothing. 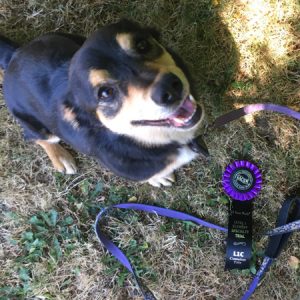 Key looks so happy, doesn’t he. I had cheese. That’s the real secret to happiness.

My instructor, Dana Stillinger of Best Friends Obedience and Agility School, Inc. and Doggy Daycare said she wanted to hear about my experiences in the trial, so I thought I’d write this little blog post so she (and everyone else!) could hear all about it!

Key has always like containers, so I wasn’t too worried about this one. What I didn’t count on was floors; Key HATES slick floors so the first search of the day was pretty tough. Key’s little feet were splayed SO wide. But I let him go slow, he settled down, and when we came to the correct box, he said “alert.” The rest of the searches were on other surfaces, so he was quick as can be.

The only other item of note was that I kept Key on a 6′ leash instead of a long line. I wanted to be able to control where he would go in case there was a lot of boxes. I ended up being surprised that most of the tests had less than 10 boxes. One only had 5 (but the boxes were up on chairs.)

I was a little more apprehensive about the interior searches because they have never seemed to be Key’s favorite. Little did I know!

Again, I decided to keep Key on  6′ leash instead of a long line (or off leash) because I wanted to be able to control him a little more in a confined space.

The hardest part about this set of tests was trusting my dog. In disconcertingly short amount of time (notice 4-5 seconds for the first three searches) Key would run over to some random object and say “Here.” It was SO short that I had to stop myself from double checking him. But he’s never shown ANY interest in music stands before I would tell myself.

The last search of the day, though, that was the one that I would LOVE to have a video of. I was SO proud of Key, and I even want to give myself a pat on the back because I think I handled it well.

It was a little room (the whole thing was in a church) that people used to sit or prayer in (they called it the prayer room). Key raced in and quickly made a search of the perimeter. There was one spot that I thought he might be in scent, but he didn’t alert, and as I said above, it’s not my job to double check him (it’s my job to read my dog, in case you were wondering). So on the second round, Key was sniffing and suddenly he caught the scent. And you could see (and hear his deep sniffing) him working the scent. “Okay, it’s here… but stronger there… but it’s up here… but no… but around… but… UNDER!” And he gave a clear alert.

All this time I kept thinking about Dana hollering at me: “Keep the leash out of his way. Don’t just stand there, move your feet! Give him space! Read your dog!”

He was AWESOME. And I wasn’t too bad either.